Rajasthan is a place of rulers and great legends who have dutifully encouraged artists to create traditional crafts, highlighting the rich Indian heritage.

"It takes a perfect Rajasthani Jewellery to transform you"

Rajasthan is a state in India, which is famous for its splendid history. Besides forts and palaces, traditional handicrafts from this place are very popular.

Traditional crafts of Rajasthan are about vivid shades, distinctive shapes, metals, scenic paintings and a medium of entertainment.

The word ‘Rajasthan’ means a place of kings. People travel from all over the world to visit Rajasthan and cherish the rich Indian history.

Legends from Rajasthan have had a big impact on the state, providing amazing royal culture and traditions, that Indians continue to follow.

Normally at weddings, the bride and groom will get ready in the royal attire. Similarly, taking inspiration from vibrant royal families, people in modern times like to in surrounding with distinctive items and colours.

Thus over time, many traditional crafts of Rajashtan began flourishing in India across the globe.

Here are 12 mindblowing traditional handmade arts of Rajasthan India, that can take anyone to ancient Indian times. 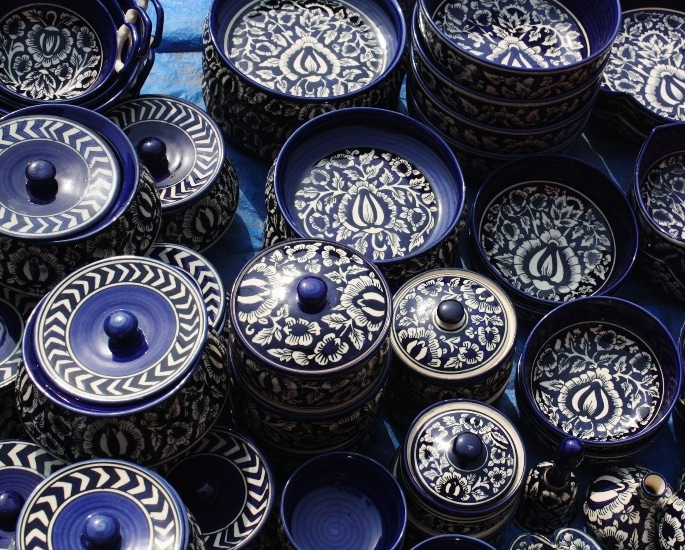 Blue pottery is a widely popular traditional craft from Jaipur, Rajasthan. Although, the art originally has a Turko-Persian background.

The name ‘Blue Pottery’ comes from a vibrant cobalt blue dye colour that artists use for making articles.

It is specifically a blue and white form of pottery, which is Euroasian in type. The size and shape of art take influences from Chinese pottery.

While carving the port for this craft, there is no usage of no clay. Craftsmen use quartz stone powder, powdered glass, gum borax and Multani mitti (Fuller’s Earth) and water to make a dough for the port article.

These pottery items are normally embellished with animals, birds and flower motifs. Handicrafts that are commonly made with pottery include a flower vase, ashtray, small bowls and ports. 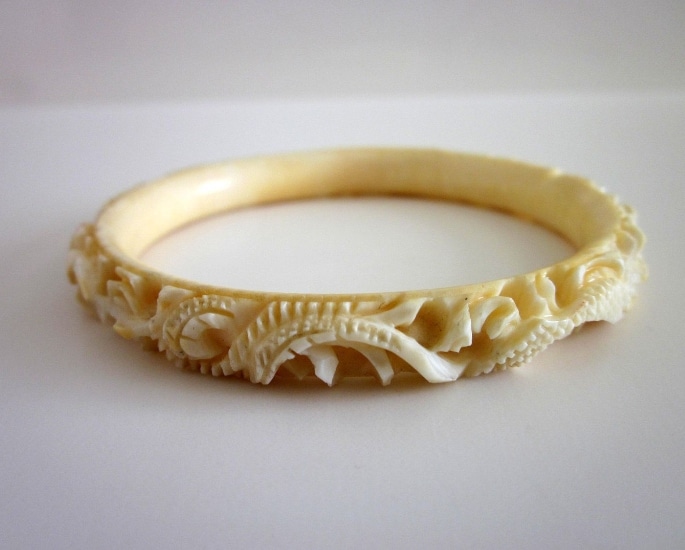 Ivory is a hard cream shade material that comes from an elephant trunk. It continues to compare with other expensive stuff like pearl or sliver.

Jaipur, Rajasthan is like a hub for Ivory. The ivory bangles are a piece of traditional jewellery, with Rajasthani women wearing them on every important occasion.

Many admire ivory for both practical and artistic reasons ss it is stronger than a block of wood and reliable. It does not break or crack with easy use.

Over the years, ivory has come a long way. Earlier, when metal was not around, men made weapons using ivory material.

Most noteworthy, ivory has become more expensive, with people considering it as a luxurious traditional item. 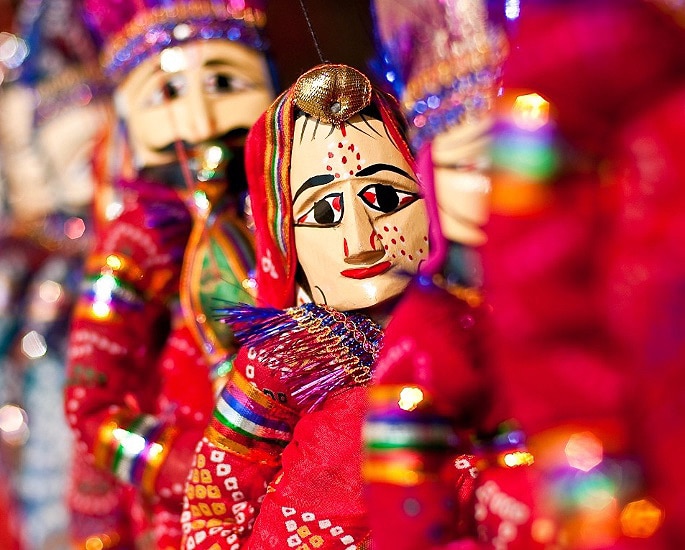 A puppet is familiar in India as a kathputli. The name links back with two Rajasthani language words, Kath meaning wood and Putli, which means no life.

Kathputli means a puppet, which is completely made with wood. An artist uses cotton and colourful clothes to make them look stunning.

Puppet or kathputli has roots from Nagaur, Rajasthan and surrounding areas. The capital of India, New Delhi also has an area by the name of ‘Kathputli Colony’ in Shadipur Depot.  This is where all the puppet workers, musicians, and dancers live.

According to many historians, this art is a thousand years old. The tradition of Kathputli began with ancient folk tales about rich kings and kingdoms.

With the passage of time, it became a source of entertainment. Puppet shows take place across traditional fairs, reflecting social issues or subjects.

Vijay, the son of kathputli artist Vasanti Devi explains to The Hindu about keeping this traditional art form going, despite difficulties in life:

“Nothing but the determination to keep the art form of our ancestors alive.” 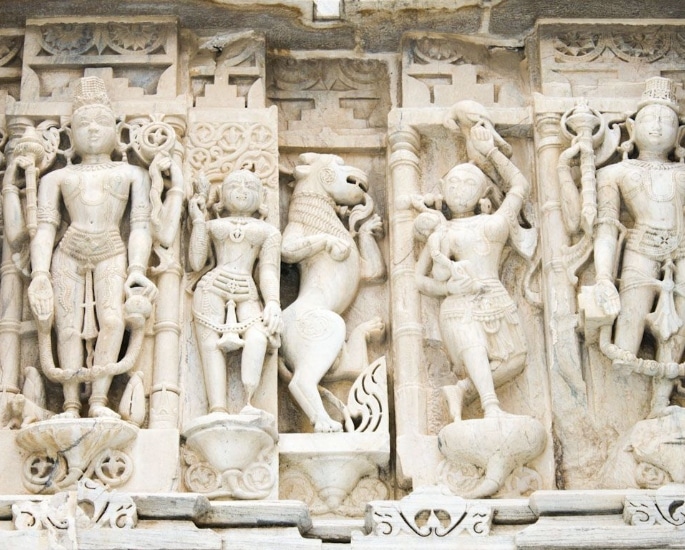 Existing in India since the 7th century BC, stone carving art is a very rich traditional craft. The skills usually are passed down from father to son.

The classical cultural stonework is like an extension of architecture. Rajasthan is naturally wealthy in marbles, granites, slates, quartzite, and other rocks. Thus it has become a centre for stone carvers.

In addition, the great quality of marbles and sandstones extracted from various mining and had given fame to sculptors.

Mines in Makrana, Rajasthan are famous for its marbles. Marbles of Makrana quarries were used in making of the Taj Mahal, which is one of the wonders of the world.

In medieval and ancient times, there was no use of brickwork. Hence, the effortless availability of stones made it easy for architects to make many more wonderful forts and places. 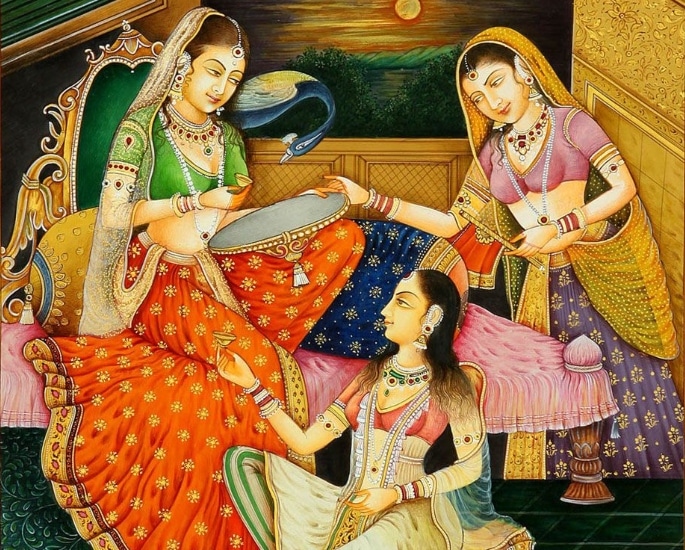 Rajput is a community that has historical connections to ancient kings. With a royal link, they would adorn their palaces with beautiful handmade paintings.

Most noteworthy, walls of the kingdoms were adorned with amazing handmade paintings. As Rajputs were regal, their living was vibrant and still stands out magnificently in the world.

Although Rajasthani paintings have a plethora of themes, most commonly these artifacts were made with a purpose. For instance, Mewar rulers wanted to portray their ambition to establish their legacy.

Rajasthani paintings are a rare combination of art and reality. With changing times, these paintings are narrating the history of Rajasthan.

Blogger Juhee Mehta mentions the evolving process of these paintings in her Udaipur Blog.

“These paintings evolved and prospered in the Rajputana royal courts.” 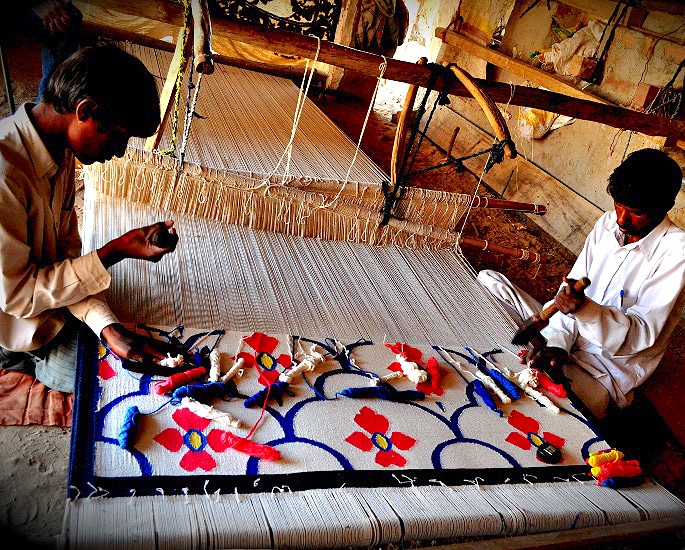 Dhurrie is a thick and flat handwoven rug, that Indians use to cover the floor to sit or sleep on.

They are used for large political or social gatherings and are quite comfortable. Most importantly, they have low maintenance.

Making Dhurries is a traditional craft of Rajasthan. Previously, Dhurries were used in kingdoms to cover floors with a colourful handmade rug with stunning designs.

These carpets were first manufactured in Rajasthan in the 17th century. Additionally, weavers from Afganistan had merged the style into the royal ateliers.

In areas such as Bikaner and Jaisalmer, Dhurries are made from cotton yarns. In the Tonk region of Rajasthan ‘namdahs’ or felted rugs are produced. 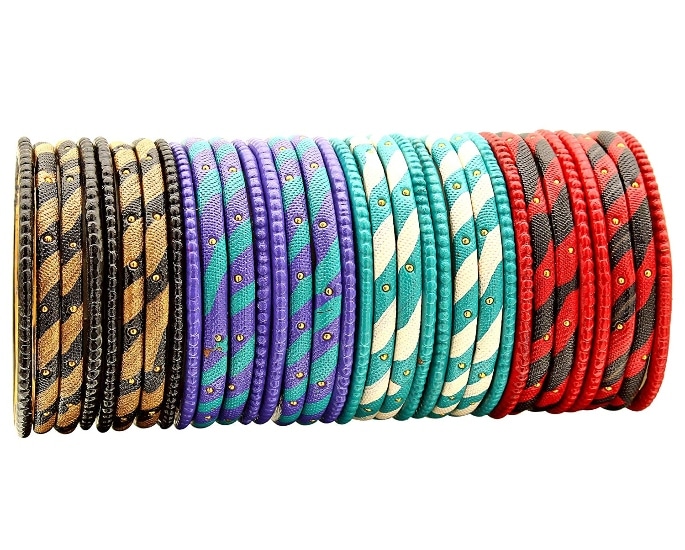 Lac Bangles, which are fabricated from molten lava is a speciality of Rajasthan. Other than Rajasthan, these bangles are considered auspicious in many parts of India.

For instance, pink bangles are worn during the Holi festivities, Whereas, ‘gulali choodha,’ which means red bangles are worn on the wedding day. Other colours are significant on various other occasions.

While making this lovely craft, lac is pasted on the wooden rode and rolled via a flat board to give it a cylindrical shape. The width of a bangle depends on the design, taking into account the occasion also.

After giving them the shape, artisans adorn the bangles with pearls, semi-precious stones, mirrors, and small colourful beads.

Belonging to a family of Lac bangle artists, Ahmad goes back in history to describe how this craft became the centre of attention.

“When Maharaja Jai Singh built Jaipur, he wanted it to be the cynosure of all eyes.” 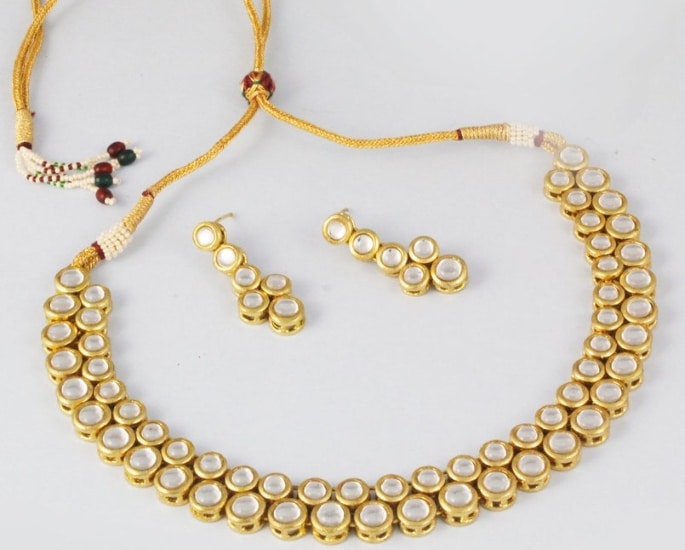 Kundan is a traditional Indian gem and used in heavy pieces of jewellery. The story of Kundan traces its roots to the Rajasthani royal times.

Due to its magnificent look, this piece of jewellery was worn by queens in India.

The city of Jaipur in Rajasthan is at the core of Kundan jewellery. Kundan is also familiar as Jaipuri jewellery, with it being famous for enamelling vivid hues in heavy designs.

Kundan remains a vital part of traditional bridal jewellery, with Brides in India wearing it on their wedding day. In many period films such as Jodhaa Akbar (2008) and Padmaavat (2018) actresses are wearing Kundan jewellery.

The elaborate process of assembling Kundan in articles starts with the skeletal framework, which is known as ‘ghaat.’ 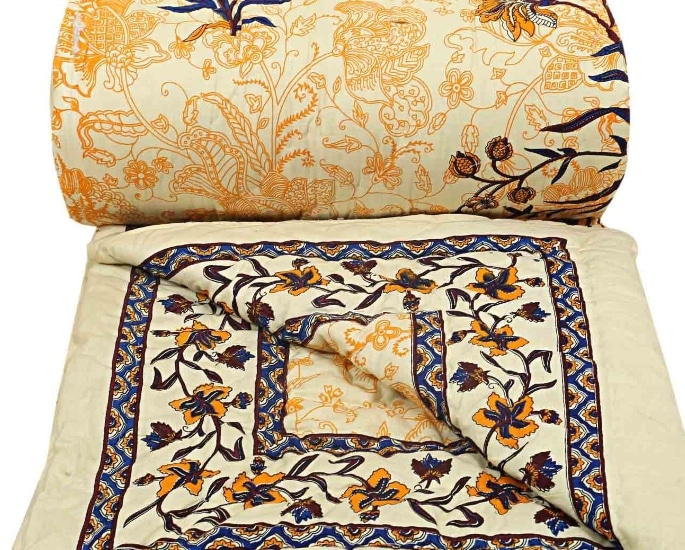 Rajasthani Razai is a high-quality silk quilt. This hand made item has demand in India and worldwide.

Jaipur is the hub of Rajasthani Razai. Manufacturers make these quilts in so many ranges like a micro quilt, printed quilt, light-weighted quilt and AC quilt.

In fact, the quilts from Rajasthan depicts the wonderful and vibrant culture of colourful India. Royal palaces, forts, silhouettes of king and queens, elephant, camel or palace gardens are visible on them.

Above all, Rajasthani artists paint the whole quilt with their hands, that too with natural colours, which make these quilts more unique.

After receiving a quilt from Amazon, a buyer could not back their feelings about their purchase: 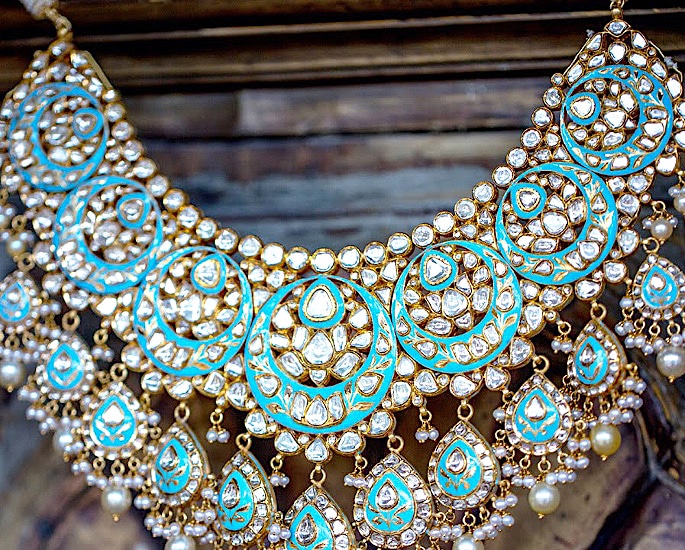 Meenakari is an ancient and fascinating Indian jewellery tradition. This style of decoration comes very long, holding an appealing position in the fashion market.

Raja Man Singh of Mewar, Rajasthan was regarded as the patron of this art in the 16th century. Due to his efforts, this craft gained popularity.

It is also a symbol of culture and tradition. Additionally, it has an exquisite look, making a bride look like a queen on her wedding day.

Rajasthani Meenakari work plays a significant role in carving striking designs in the modern-day jewellery world. Meenakari is all about delicate shaping, intricacy, cultural designs and vivid colours along with gems and stones.

Commenting on a woman’s transformation with such jewellery, Soumya Joy writes in her blog on Times of India.

“It takes a perfect Rajasthani Jewellery to transform you from a normal woman to a regal lady in seconds.” 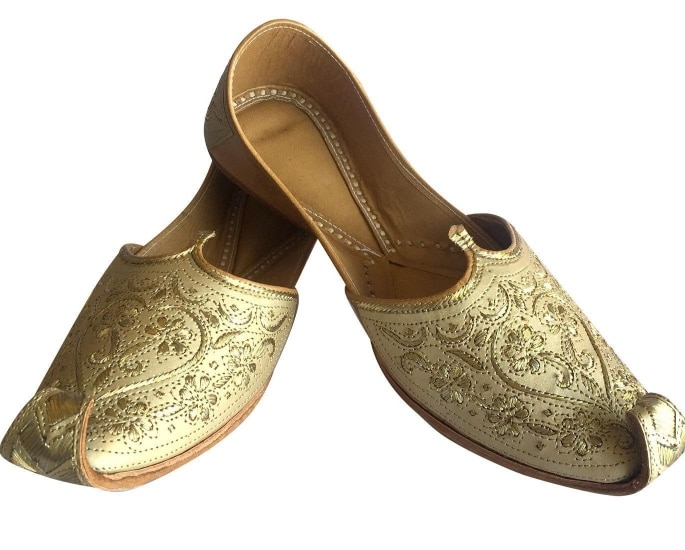 Morjaris or Jutis are handmade footwear with exquisite embroidery. This traditional craft has made Rajasthan walk a long way while holding an attractive position.

The motifs and patterns of the footwear, vary from district to district. However, Jaipur and Jodhpur are the hubs of mojaris.

They are a pivotal part of traditional dresses. Mojaris are made for men and women both, with people of India wearing these with traditional attire.

They are made from camel leather and ornamented with stones and silk thread embroideries.

Above all, mojaris are popular amongst locals and with travellers who visit India. This footwear also requires mastery, as it undergoes several processes. 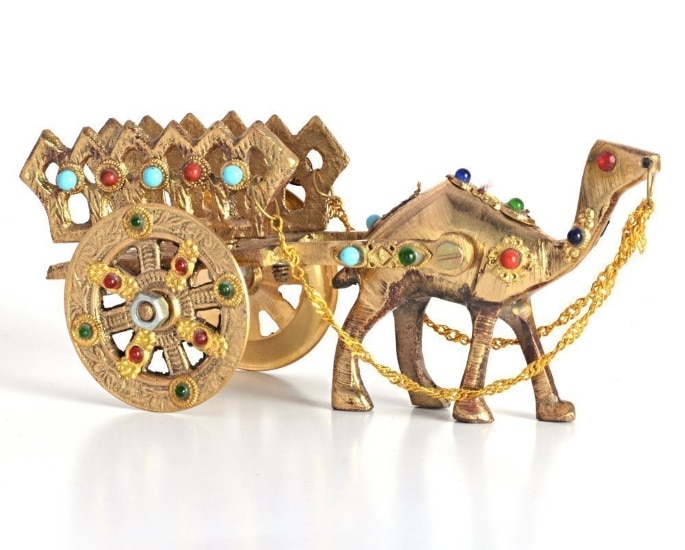 The metalcraft of Rajasthan showcases the classical history of regal culture and traditions. This craft looks so effortless, but it takes great craftsmanship to come up with a perfect product.

Most popular metal product styles include Bichi, Chikan and Marori. Furthermore, the most favoured type of metal used in this craft is Theva.

Pratapgarh Rajasthan is practising this art for a long time. The craft received royal patronage and is said to be four hundred years old.

The patterns in metal craft tell the story of ancient legends. Craftsmen make sure to make perfect metal handicrafts.

Wooden craft and Bandhej textiles are also known for their beauty and usage in Rajasthan. Jaipur, Bikaner and Udaipur are the main cities that practice Rajasthani Handicrafts.

Rajasthan simply offers incredible flavours and colours to its visitors. Moreover, culture and tradition is a vital part of the Rajasthani way of life.