The picturesque Jagmandir Island Palace plays host to a star-studded Indian wedding. DESIblitz finds out more from the couple and photographer Arjun Kartha.

"He decided to go out and buy me a stash of gorgeous make-up!"

After dating for three years, Jay and Anusha decide to get hitched in one of the most unique venues in the world – Jagmandir Palace.

A summer resort for Indian royalty, every corner of Jagmandir Island Palace breathes history and luxury.

More recently in 2015, it is one of the locations where Indian billionaire Sanjay Hinduja married fashion designer Anu Mahtani. 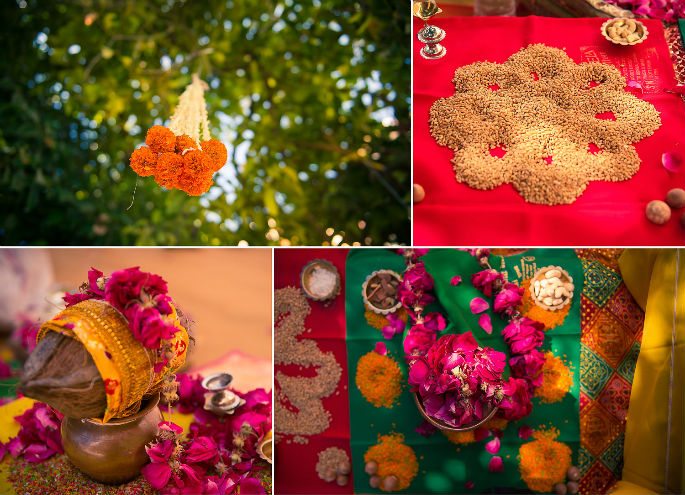 For Jay and Anusha, minimalist decoration is the way to go in order to retain the Palace’s original glamour.

Anusha, a Marketing Communications specialist, tells us: “The idea with the decor was to let the majestic nature of the venue shine through.

“On the mehendi and chunari afternoon, the pool took centre stage. We added accents like colourful flowers in watering cans and bottles, old wooden pallets painted a bright white.

“For the sangeet night, a part of the building in the Zenana Mahal was used as a backdrop for the stage with LED panels and laser lighting, along with a minimal monsoon theme with blue clouds on the ceiling.

“For the wedding, we wanted to maintain the grandeur of the building and played many with lighting to create an ethereal ambience.” 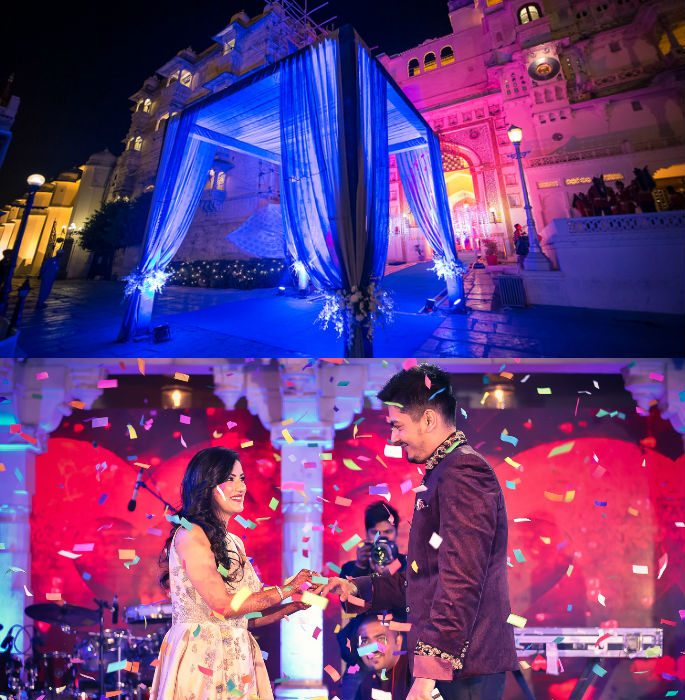 The magical setting of the wedding is matched only by the couple’s love story and how much they care for each other.

Jay, an entrepreneur, met Anusha through his cousin who coincidentally was Anusha’s flatmate in Mumbai.

Neither of them was a fan of matchmaking, but three years on, they cannot imagine a life without one another.

Anusha recalls making a rare appearance in the kitchen to cook Dim Sum from scratch for her man:

“That may not sound like much to most people but, whereas Jay is a great food connoisseur, I’m not much of a cook!

“In fact, my cooking skill and experience are quite minimal. But I overcame my fear and took on this ambitious project.

“I was ecstatic that everything turned out well and Jay enjoyed his meal very much!” 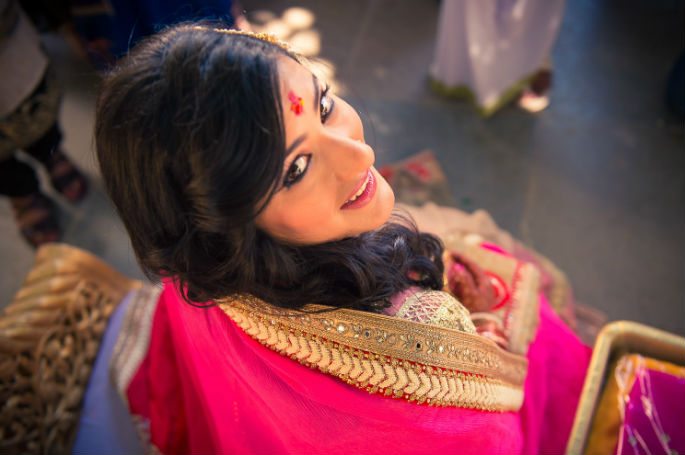 Returning the favour, Anusha tells us how Jay embarked on a daring adventure into where most men fear – makeup shops!

“He’s a straight out guys’ guy and has never gone shopping for a lady before or since.

“But on one special day, he decided to go out and buy me a stash of gorgeous make-up, selecting each item personally after long discussions with the helpful salesladies.

“Those are some of my most cherished makeup items till date. I think he did a better job of picking them out than I could myself!” 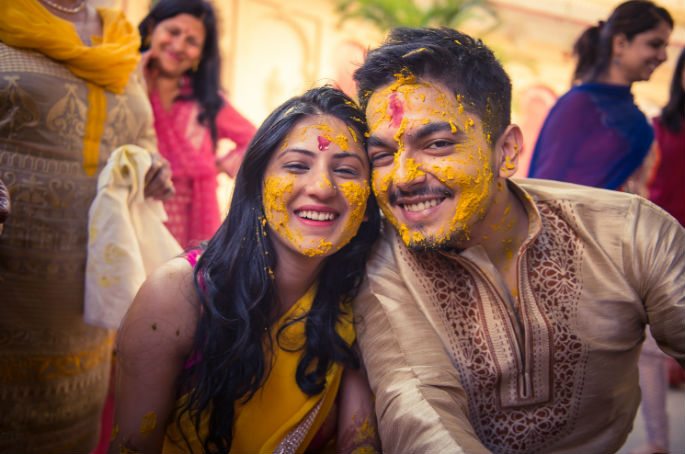 The couple even bring their knack for delivering pleasant surprises to the wedding, keeping their photographer Arjun Kartha on his toes!

“The biggest surprise for us during the wedding was when, during the Mehendi lunch, a whole bunch of people picked up Jay and tossed him into the pool.

“It wasn’t long before his brother, Neil, was tossed in along with many more of their guests. We were glad that we were paying attention and managed to capture all the fun and excitement!”

Here is Arjun’s tip on perfecting those incredible in-motion shots: “We think it’s important, in our kind of candid and documentary style of photography, to be aware of everything around us so that we don’t miss out on special moments, sudden excitement or impulsive drama!

“As long as you train yourself to work with the lighting limitations that always present themselves at Indian weddings and keep your eyes peeled, you can be sure to get some brilliant photos.” 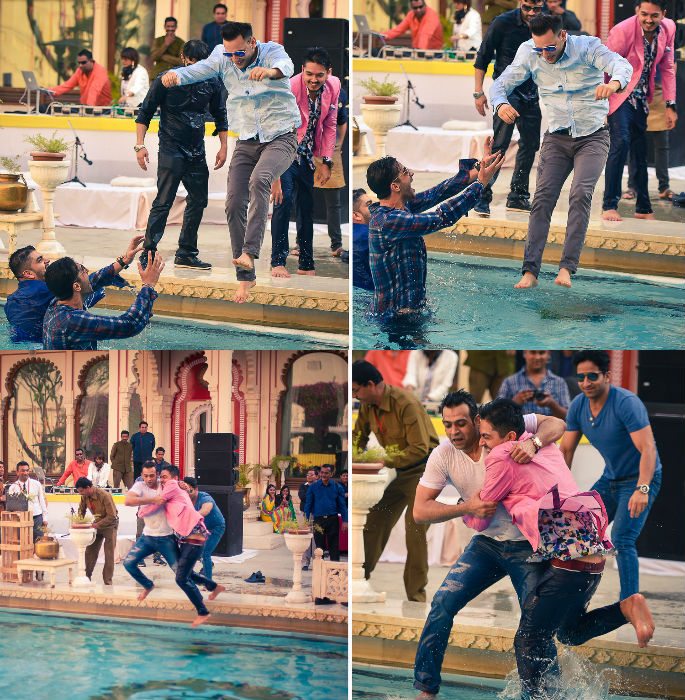 The Delhi-based photographer works closely with his wife of six years, Praerna, who shares his profession. While most would avoid working with their partners, Arjun embraces the highs and lows all the same:

“Most of the time, it works brilliantly because we are very tuned in to each other and are instinctive about when the other needs help or needs space to work.

“On the few occasions that it doesn’t work so well, we have to make a conscious effort to resolve differences off-the-job!

“As far as we’re concerned, the secret to a happy marriage is respecting your partner’s boundaries, working on their strengths and being a crutch to their weaknesses.” 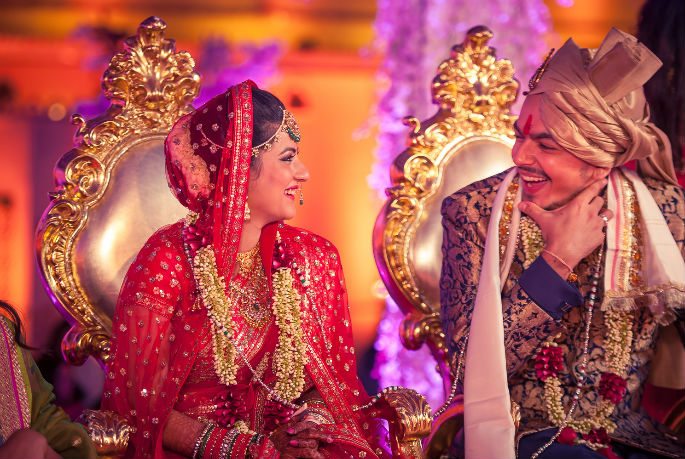 The upbeat and creative photographer also expresses a keen interest in experimenting with different devices to shoot weddings:

“I’ve always been fascinated with mobile phone photography. When Samsung challenged me to get out there with the S7 Edge – I knew it would be interesting.

“I’m amazed at how far mobile phone photography has come over the years. I am confident that as technology grows, we’ll soon see the lines between ‘professional’ and ‘non-professional’ lines blurring.

“I always have my phone out during weddings (in addition to my camera), and would be very interested in doing a mobile-only assignment – for the right couple!” 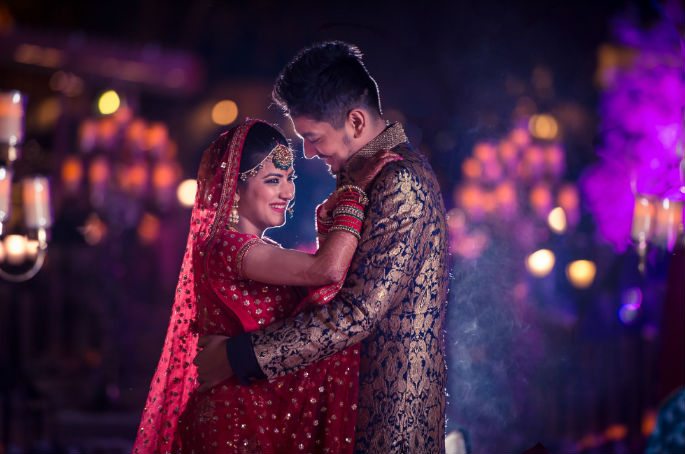 Enjoy our gallery of Jay and Anusha’s beautiful wedding below: