London’s La Porte Des Indes offers exquisite Indian cuisine with a French touch. In a special cookery class with DESIblitz, the restaurant has collaborated with American film, The Hundred-Foot Journey.

The restaurant has hosted celebrities including Will Smith, Kylie Minogue and Leonardo Dicaprio.

They appear to be an ideal restaurant for the collaboration, as The Hundred-Foot Journey depicts Indian cuisine being brought to France, whilst La Porte des Indes utilises the influences of the French colonies in India, such as Pondicherry, Chandernagar, Yanaon and Karikal.

La Porte des Indes opened up in 1996 at a former Edwardian ballroom in Marble Arch. Since then, it has offered a taste of Indian cuisine with a difference.

The menu has an alchemy of French, Tamil and Creole influences dating back to the 19th century in India. 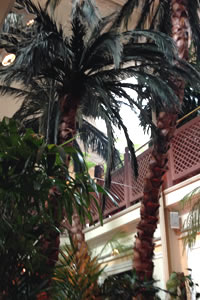 The menu features delicately spiced dishes and traditional dishes from the Indian subcontinent, but they are created with original flair and flavour.

The restaurant itself seems extremely opulent yet exotic at the same time. It is a blend of north meets south, perhaps literally, as French colonies were in both North and South India!

La Porte des Indes is perfect if you feel like having Indian, but do not want to have the typical dishes seen in most Indian restaurants.

It is also an ideal place for those who feel that Indian restaurants lack seafood, because they offer a fine variety of seafoods within their dishes.

Some of the restaurants most popular or key dishes were made in the cookery class, and they included; ‘Crunchy Chard and Water Chestnut Beignets’, ‘Cassoulet de Fruits de Mer’ and ‘Rougail D’Aubergine’.

The dishes served in the cookery class and the luncheon were delicious. The food was a delicate medley of different spices and somewhat experimental in terms of flavour and ingredients. 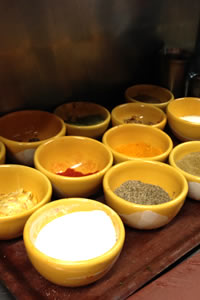 Some key cooking secrets were shared by head chef, Mehernosh Mody. His first was: “One shouldn’t hurry a curry.”

This jokingly stressed the real importance of slow cooking, as slow cooking a curry for 4 hours is crucial to allow spices to be roasted, tomatoes to be sautéed and onions to be caramelised.

In order to truly develop the flavour of the curry, you certainly can’t hurry it up!

Another key thing that the cookery class were informed of was how to know when a curry is cooked: “The change of aroma tells you when it has been cooked, as well as when the oil separates and you can see it,” Mody says.

On the topic of oil, Mehernosh said: “It doesn’t really matter what oil you use. Probably the most suitable one will be vegetable oil.”

“When you are making curries, oil is a medium to the cook the spices in, as opposed to something like Italian [cooking], where the flavour of the oil [itself] becomes important”.

Mehernosh Mody is an award winning chef from Mumbai who is now the executive chef at La Porte des Indes. He is a large contributor to the several accolades the restaurant has achieved, including recognition from the AA guide and The Good Restaurant Guide.

The restaurant has also played host to a number of high profile celebrities in the past, including Will Smith, Kylie Minogue and Leonardo Dicaprio. 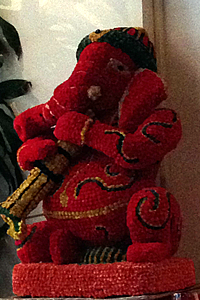 In addition to some delicious Indo-French culinary delights, the cookery class were treated to some Indian wine. Mandala is a wine brand created by London based doctor, Uday Kumar, but its vineyard is set up in Nasik, India.

Uday said: “Mandala means circle in Sanskrit and this basically means the completion of the wine. Many do not know that India has an abundance of grapes and Nasik is known as the Napa Valley of India.”

“Many do not think that wine complements Indian food because of the spice that can overpower food. However, when you are dealing with fine foods served in somewhere like La Porte des Indes, where curries are delicately spiced, the wine soothes your palate and particularly balances the yoghurt that features commonly in Indian foods.”

Mandala is available online through their websites and in several London restaurants.

As the partner of The Hundred-Foot Journey, La Porte des Indes have released a special offer for audiences to visit the restaurant post film between 5th-26th September, 2014.

Audiences can savour a Plateau des Indes Francaises, which is a tasting platter of main courses inspired by the former French occupied colonies of India. This is £26, and includes a glass of French sparkling wine.

The Hundred-Foot Journey was released in cinemas from Friday 5th September.

The film stars Helen Mirren, Om Puri and Manish Dayal and is directed by Lasse Hallstrom, whose previous credits include the academy award nominated My Life as a Dog and The Cider House Rules. The film is produced by Steven Spielberg and Oprah Winfrey.

Sonika is a full-time medical student, Bollywood enthusiast and lover of life. Her passions are dancing, travelling, radio presenting, writing, fashion and socialising! “Life isn’t measured by the number of breaths taken but by moments that take our breath away.”
Traditional Desi Cooking Tips
Effortless Cooking with the Palate Smart Grill