3 Real Indian Brides that Eloped on their Wedding Day

A growing trend in India is seeing soon-to-be brides elope with their lovers on the day of their wedding. Here are three real stories of brides who eloped.

"We love each other very much and want to marry,"

Indian weddings are a grand affair with major expectations of the bride during and after the wedding, especially in arranged marriages.

But what if the bride is not happy and is feeling pressured by her family to marry a man she does not want to?

What does she do? Most would think she would call off the wedding.

However, a trend growing in India seems to be that of brides eloping on the wedding day or just before, especially with their lovers.

These brides wait until the wedding to make their escape because, during that period with so much going on and families occupied with the wedding, it is the ‘perfect time’.

We look at three real stories of Indian brides who eloped from their weddings.

The first real story is about a bride called Nandini from the Karnataka region of India.

Having a lover and someone she wanted to marry, she executed plan her elope with him on the day of her wedding.

As a resident of Hosahalli village situated in H.D Kote, Nandini was supposed to marry Krishna Nayaka of Marballi, Karnataka. But Nandini knew this wedding was not going to happen.

The wedding was set for the 8th July 2018 with Mr Nayaka.

The couple were reportedly engaged and marriage preparations were well underway. With their wedding expected to take place at the Srikanteshwara temple in Ullahalli.

However, it seems Nandini wasn’t as committed to the wedding as her family were.

In the early morning hours of the day of her wedding, the imminent bride fled with her lover, leaving her family and relatives extremely shocked and surprised.

The twist in the story is that despite Nandini disappearing and eloping, the parents of Mr Nayaka were keen and adamant that he still got married on the day of his wedding.

Facing a cancelled wedding, his family feared that Krishna would plunge into depression and turmoil, so they arranged that he would marry a relative instead.

Krishna married the relative that his parents quickly arranged and the ceremony went ahead as planned.

The marriage took place, just with a different bride and not Nandini, as it was originally intended.

The second real Indian bride who eloped was Ramaya* from a village near Bangalore.

Ramya’s marriage was arranged and set to take place with 23-year-old Gurresh. However, it’s clear that Ramya had other ideas.

The marriage ceremony was taking place at Padmavathi Kalyana Mantapa in Channakal Malur,  in late January 2018.

The bridegroom’s family had arrived at 5pm for the pre-wedding rituals which were scheduled to take place at 7pm.

When the bride’s family still had not arrived at gone 7pm at the venue, the groom’s family became deeply concerned.

Just before their pre-wedding rituals, the groom Gurresh was still waiting at the Kalyana Mantapa for Ramaya to turn up.

After attempting to reach Ramya and her family through the phone with no success, Gurresh’s family decided to visit her village.

Upon arriving at the village, they came across the shocking news that Ramaya had actually eloped with her boyfriend.

A heated discussion between the two families then ensued. To salvage the wedding and relations between the families, it was decided that a compromise would be reached.

The elders quickly arranged a marriage between Gurresh and the runaway bride’s cousin, Rathnamala*. It was agreed that the two would marry the next day.

In a shocking twist, the spontaneously re-arranged marriage was then disrupted by the groom, Gurresh this time.

The bridegroom fled the pre-marriage rituals moments before the ceremony was about to commence.

It was now the family of the bride that was outraged. The dramatic unveiling of events on this day meant that eventually, both families had to call off the wedding. 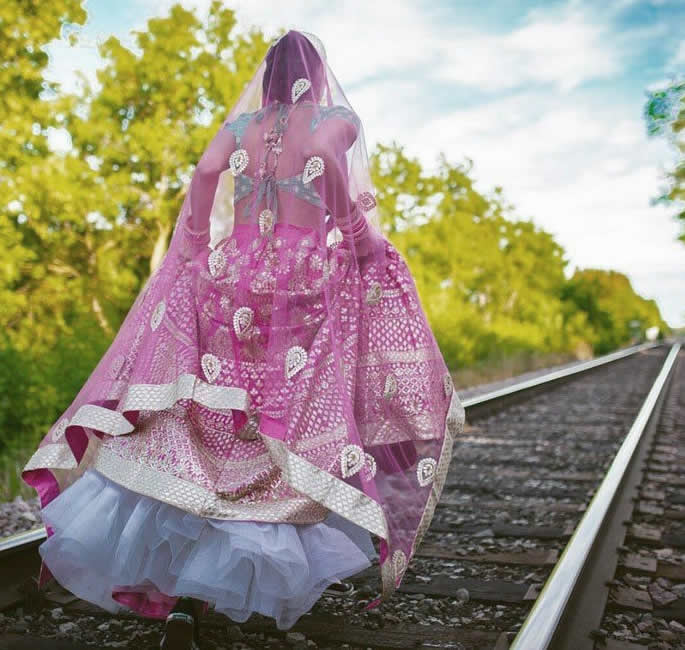 The third real story of an Indian bride eloping is that of Meena*.

In late May 2015, in Patna, Bihar, the wedding of Meena was set to take place.

The bride was said to be the daughter of a police officer and was due to marry Jitendra Kumar from Chhatisgarh.

It is claimed that the bride was in love with a relative and wanted to marry him instead. However, her family went ahead and arranged her marriage to someone else, much to her dismay.

On the day of the wedding, the marriage procession reached the hotel in Hajipur town in which the betrothed couple were to solemnise their wedding.

So, how did the runaway bride flee?

As guests and relatives were busy during the garland exchange ceremony, the bride took advantage of a moment of power loss at the wedding venue and fled.

Dressed in her wedding attire, the bride dramatically eloped using a bike. She took off with her engineering student boyfriend, who has only been identified as ‘Prince’.

After being jilted, the groom enlisted the help of the police to find his runaway bride. Kumar also registered a case against three people who he claims aided his betrothed to elope.

As a result, the police launched an investigation that eventually led them to find the groom’s would-be bride and her lover.

In a statement, the runaway bride spoke to the local court. She said that the two were in love and wanted to live together. Her boyfriend gave a similar statement, saying:

“We love each other very much and want to marry,”

Whilst it’s unknown how this situation was resolved, it is evident that this bride was someone who was going elope at any moment she could during the wedding, using a premeditated plan with her boyfriend.

These three examples of brides eloping from their weddings give you a quick insight into the mindset and actions of brides not happy about their arranged marriages.

Knowing they cannot marry their lovers, they are left with little choice but to elope.

Whilst many will not agree with this practice until Indian culture does not start to be more accepting of an Indian woman’s choice of a husband, eloping at weddings most likely will continue to be a growing matter for the country.

* Names are created for anonymity