The first ever World Cup championship tournament for women’s Kabaddi took place in Bihar, India. The Indian team reached the final playing Iran and triumphed to go on and win the cup. This is a history in the making because India is the first women’s team to win the accolade for the female version of the usually male dominated sport.

"We will aim to keep the world cup for India"

This is the first Kabaddi title of this kind for the women’s tournament which was a four day event and involved the participation of 16 countries. Including teams from Mexico, Nepal, Malaysia, South Korea, Japan and Thailand. 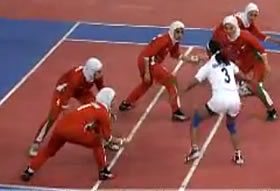 Kabaddi is a South Asian sport where two teams occupy opposite halves of a field. A team will then send a player, the ‘raider’ into the other opposition’s half, holding her breath and chanting the word ‘Kabaddi’ continuously. In order to win points, the raider must touch or tackle members of the opposing team and then return to her own half. If the raider does not make contact with the opposition and returns to her side, she does she will be declared as “out” and the other team takes over.

To reach the final, earlier in the day, India defeated Japan 60-21 and Iran beat Thailand 46-26 to become the second finalist.

The game was a thrilling final. the Indian belles took control of the game throughout the match and at half time the score stood at 19-11 against their their Iranian counterparts.

Cheered by the fans at the jam-packed stadium, the game started fast with Mamata Pujari, the captain of India, scoring eight points and Iran’s captain following suit, by scoring eight points too. The game then changed after half time, where India became more defensive and went on to win the match with this approach.

Pujari, who worked in Indian Railways prior to playing, said it was the team spirit and strong ethic of teamwork which was the key behind their outstanding performance.

Speaking about the win Pujari said:

“All of us combined together and played very well to lift the Kabaddi world cup for the country. I congratulate all my team members.” 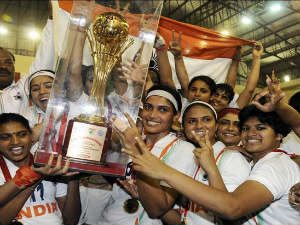 “Actually we wanted to play better that what we did, but we are happy that our performance just proved to be adequate for the title,” added Pujari.

Pujari was adamant that the Indian team was thoroughly prepared for the tournament and committed to win the championship to bring cheer to the country.

Earlier in the day, India outclassed Japan 60-21 while Iran defeated Thailand 46-26 in the two semifinals to set up a summit clash.

Prior to the the semi-finals, spectators and police clashed outside the stadium further to some people carrying invitation cards were denied access to the stadium. The protesters pelted stones at the police who then reacted with a baton-charge. Calm was restored shortly after.

The trophy ceremony for the final featured the Bihar Deputy Chief Minister Sushil Kumar Modi giving the World Cup accolade to India captain Mamata Pujari and then medals to all members of the winning team. 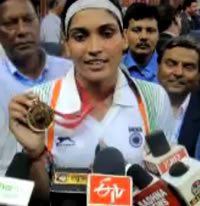 With high hopes for the future of the Indian team, Pujari said: “We will aim to keep the world cup for India from other teams in the future. We will work harder. The team was made from me and Deepika from the seniors and the rest were juniors who played very well”

She added:”Most people say it is a men’s sport but we have proved we can win gold too!”

India’s women have made history and have achieved the top prize in women’s Kabaddi. But the interesting thing is that this sport once associated primarily with Indian men has developed a world interest with countries as far as Mexico competing in the women’s tournament. It is likely we shall see growth and popularity of this sport and perhaps one day even see a UK women’s team competing.

Baldev enjoys sports, reading and meeting people of interest. In between his social life he loves to write. He quotes Groucho Marx - "The two most engaging powers of an author are to make new things familiar, and familiar things new."
India’s Bhaichung Bhutia leaves Football
Tendulkar hits 100th International Century