Bhaichang Bhutia, India’s most popular football star played his final game as in a testimonial match versus Bayern Munich. After a sixteen year international career the iconic player has achieved great respect and status for his contribution to Indian football.

India’s most popular footballer, Bhaichung Bhutia, hung up his boots on 10th January 2012 after playing in a testimonial match against Bayern Munich at the Jawaharlal Nehru Stadium in India. A player who has played alongside major stars like Brazil’s Kaka, France’s Zinedine Zidane and England’s Steven Gerrard, played his final game in front of a crowd of over 30,000, who gave him a standing ovation.

For Bhatia, the special match will remain one of the most memorable events in his career. After the game he said: “I would like to thank Audi for bringing Bayern Munich to India and making them appear in my testimonial match. I would also like to thank the (All India Football Federation) AIFF and everyone in the media as well for making this game memorable.” 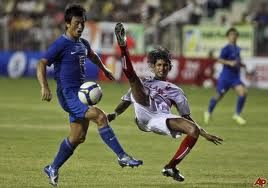 Bhaichung Bhutia was born in Tinkitam, as small town in South Sikkim, India, on 15 December 1976 to Dorji Dorma and Sonam Topden. His parents, both farmers in Sikkim, were originally not keen on Bhutia’s interest in sports. However, his uncle, Karma Bhutia, played a strategic role in encouraging Bhaichang, and he started his education in St. Xaviers School, Pakyong, East Sikkim. At the age of nine, he won a football scholarship from SAI to attend the Tashi Namgyal Academy in Gangtok.

He played for many local teams in Sikkim and it was his performance at the 1992 Subroto Cup, where he won the “Best Player” award, which brought him to the attention of the national football establishment. He got help from former goalkeeper of the Indian team, Bhaskar Ganguly, who spotted his talent and helped him make the transition to Calcutta football.

At the age of 16, in 1993, he left school to join the professional East Bengal Club in Calcutta. In 1995, he transferred to Punjab’s JCT Mills in Phagwara, who went onto win the India’s National Football League in the 1996–97 season. Bhutia was the top goalscorer in the league, and was chosen to make his international debut in the Nehru Cup for India. In 1996, He was named “Indian Player of the Year.” 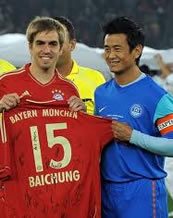 After returning to the East Bengal club in 1997, Bhutia received the Arjuna Award in 1999, an award given by the Government of India to athletes for “outstanding achievements” in national sports.

In September 1999, Bhutia made history by becoming the first ever Indian player to be signed by an English club. He was signed by Bury (near Manchester) on a three year contract. On April 15th 2000, he scored his first goal in the English league in the game against Chesterfield. In 2002, he returned to India to continue his club and national career.

Bhutia’s international career which spanned 16 years was what made him immensely popular, scoring goals in many national games in the Indian shirt. The 2009 Nehru Cup was significant for Bhutia, as he earned his 100th cap for India in a 2–1 win over Kyrgyzstan, becoming the first Indian player to reach this milestone. Shortly after the 2011 AFC Asian Cup in Qatar, he announced his retirement for India. Bhutia scored a record 43 goals in 107 appearances for his country.

After his testimonial Bhutia praising the coach and national team, said:

“Sixteen years has been a long journey and thanks to (coach) Savio (Medeira) also, we have worked together in the national team for many years. He recently won the SAFF Cup and I hope he takes the national team to greater heights in the near future. Hopefully we will see more good results from the national team.” 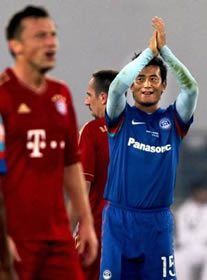 Retiring from playing does not mean Bhutia will be completely out of football. Bhaichung said he wants to make United Sikkim, the club he owns, to be the model side in the country by making it a successful team. “I don`t need to be in the All India Football Federation now but will contribute to Indian football by making United Sikkim a successful side in the country in terms of the results and financial viability,” he said.

In addition to the United Sikkim club, Bhutia is keen on training youngsters at grass roots level. “I have another project in Bhaichung Bhutia Football Schools through which I can contribute in grassroot development in the country,” said Bhaichung.

This marks an end of an era of Indian football with its iconic star bowing out of the game. However, his contribution to the Indian game should be the catalyst for more players of his calibre and beyond to emerge. One of the biggest problems in India are the facilities to support the development of Indian football. Until they do not meet the standards expected for today’s kind of game, then the development will take longer than expected.

Hopefully, Bhaichung Bhuita leaves a legacy behind now for us to see lots more Indian talent on and off the field of football and one day to perhaps see players from India playing prominently for clubs even in the Premier League.

Baldev enjoys sports, reading and meeting people of interest. In between his social life he loves to write. He quotes Groucho Marx - "The two most engaging powers of an author are to make new things familiar, and familiar things new."
Amir Khan loses to Lamont Peterson
India win Women’s Kabaddi World Cup