Sachin Tendulkar has achieved the highest century ever made by any player in cricket. He’s made his 100th international century in the game between India and Bangladesh. The Little Master has now raised the game of international cricket to the next level.

"Enjoy the game and chase your dreams. I think dreams do come true."

Sachin Tandulkar has finally made his 100th international century. The Little Master waited for a year and four days to make this historical achievement, after coming close in previous international cricket matches. The last being his 99th century against South Africa on March 12, 2011, in Nagpur during the World Cup.

The moment came as Sachin batted in the Asian Cup game between Bangladesh and India at Dhaka’s Shere Bangla National Stadium on Friday 16th March 2012.

Playing in partnership with Raina, India’s score was at 225-2 when Tendulkar was put in pole position by Raina to for his biggest hit of his career to date. The crowed roared in anticipation and all of his colleagues stood up waiting for him to claim the title. He then hit a single from Shakib Al Hasan’s bowl to him and the stadium went into frenzy. Sachin took of his helmet and looked up, saluting the sky with emotion on his face.

The century was off 138 balls, which included Sachin hitting 10 fours and a six from them. This makes Tendulkar the leading run scorer in the history of both Test and One Day International cricket and this coveted century is Tendulkar’s 49th in ODI’s whilst he has 51 centuries in Test cricket.

Speaking after his mammoth achievement which is unlikely to be ever made by any cricketer again, Sachin was calm and humble as ever and said: “It doesn’t matter how many hundreds you score, you still have to put your head down and grind it out and do the job for the team.” 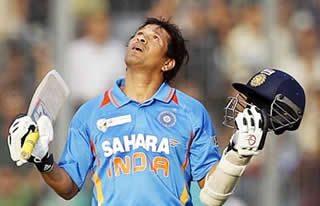 When asked if he was thinking about the milestone during the game, modestly, he replied: “I was not you know. Precisely a year ago when I got my 99th hundred, no one spoke about it during the world cup. And then it was the media I guess who started all this and then everywhere where I went; to the restaurants, house-keeping to room service, whoever met me spoke about the 100th hundred!”

The realisation of this fantastic feat was something Tendulkar laughed about and said:”It hasn’t sunk in but I’ve definitely lost about 50 kilos!”

The social media site Twitter has been jovial with praise for Sachin and his amazing accolade of a hundred international centuries with Bollywood stars to India’s politicians congratulating him endlessly. 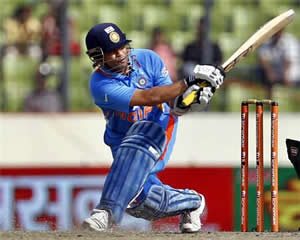 Prime Minister of India Manmohan Singh congratulating Sachin Tendulkar for his historic feat saying: “I join the nation in congratulating Sachin Tendulkar on his making history — a hundred centuries. He has made India proud,” Hailing Tendulkar’s long career as a “triumph of class, character and courage”, the Prime Minister said, “I wish him many more innings and feats to continue inspiring the youth.”

Here are some celebratory tweets from Bollywood stars:

Bipasha Basu, said: “Saluting The Great Tendulkar fr his 100th 100!We stopped our shoot to see it happen!Jubilant n Ecstatic:)”

Akshay Kumar said: “Salute to the man who never gave up in spite of all the criticism. Finally he did it. #Sachin creates history in world.”

Abhishek Bahchan tweeted: “how good is Sachin? he’s the BEST. period! stop analyzing him. stop being cynical. just celebrate him.” 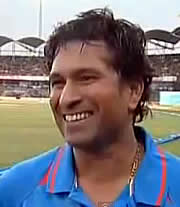 Previous key achievements include Tendulkar becoming the first in world cricket to score a double hundred in one-day internationals in February 2010, in December 2010 he became the first to score 50 Test 100’s. Both he achieved against South Africa.

The cricketer’s almanack, Wisden, has named Tendulkar as the leading cricketer in the world for the year 2010 and says: “The Little Master surpassed even the highest of expectations in his 22nd year of international cricket. In 2010, Tendulkar hit 1,500 Test runs and seven centuries, including an unparalleled 50th. He also became the first man to make a double-hundred in a one-day international.”

Tendulkar’s maessage to any budding cricketers is: “Enjoy the game and chase your dreams. I think dreams do come true. I had to wait for one for 22 years when we won the world cup. So, don’t stop chasing your dreams.”

Sachin Tendulkar’s passion is of a calibre not met by any player in terms of his achievements and ability to continue despite injury in the past. His love for the game shines in his determined performances and he no doubt raises the bar not for everyone else but for himself too. We wish Sachin Tendulkar all the very best and applaud his incredible milestone in the history of world cricket.

Baldev enjoys sports, reading and meeting people of interest. In between his social life he loves to write. He quotes Groucho Marx - "The two most engaging powers of an author are to make new things familiar, and familiar things new."
India win Women’s Kabaddi World Cup
IPL 2012 Cricket Schedule