When is ‘Where are you from?’ deemed as Racist?

The question ‘where are you from’ has been declared racist after an exchange at Buckingham Palace. We find out if British Asians agree or not.

"I've had other South Asians ask me the question."

An exchange at Buckingham Palace, between a black British woman Ngozi Fulani and the late Queen’s lady-in-waiting, Lady Susan Hussey at a charity event, has been highlighted as a racist form of questioning.

Fulani shared a tweet describing how shocked she was at the exchange between her and Lady Hussey, who is also the godmother of Prince William.

Lady Hussey moved Fulani’s hair to the side in order to reveal her name badge before asking her a specific line of questions with persistence to find out her roots.

Lady Hussey then asked her several questions, including: “Where do you really come from? Where do your people come from?”

The incident mushroomed on social media and news reports, and it resulted in Lady Hussey, who is 83 years of age, resigning from her royal duties and apologising.

The statement confirmed she had “stepped aside from her honorary role with immediate effect.”

Fulani told the media that what Lady Hussey said was “racism through and through” and “it was prolonged racism”.

Lady Hussey’s questioning: “I can see I am going to have a challenge getting you to say where you’re from. When did you first come here?”, made the exchange very uncomfortable for Ngozi Fulani. 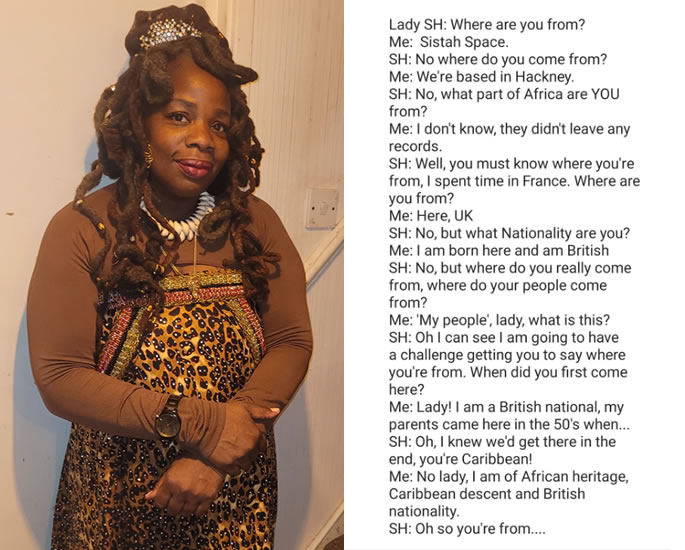 This incident and exchange highlight a number of societal points that exist in Britain in the 21st century.

Leading to the question when is ‘where are you from?’ deemed as racist? 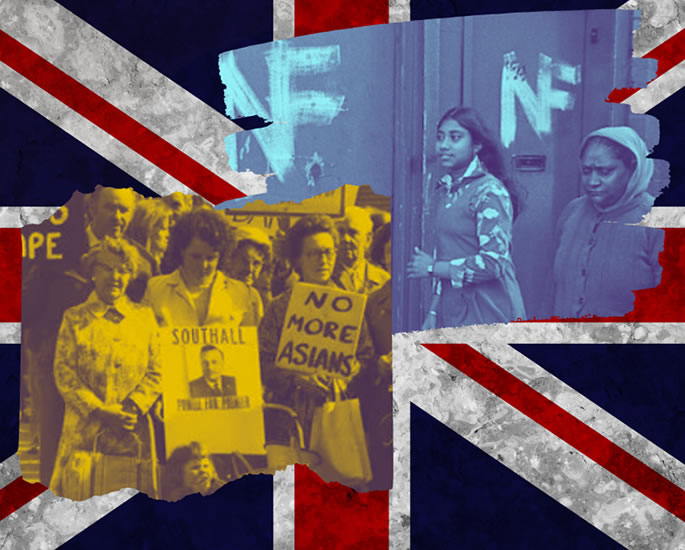 Racism tends to stem from the colour of the skin which also simply highlights common differences between people’s appearances – white, black, brown, etc.

Racism in Britain is well-documented with incidents taking place against black, Asian, and ethnic minorities over the decades.

There have in fact been racial attacks since 1918. A large-scale attack took place in 1919, on ‘coloured’ communities in Manchester, London, Liverpool, Hull, South Shields and in parts of Scotland and Wales.

Then in 1948, after the war, there were further racial attacks in Liverpool in 1948 and in 1958 in Nottingham and Notting Hill.

The 70s and 80s are notorious for racial hatred with the era of skinheads and the National Front, encouraged by speeches from politicians like Enoch Powell.

Undoubtedly, many older Asians and black people will have many many stories of racial incidents to share, especially those that migrated from South Asia and East Africa.

Early migrants from South Asia, especially India, Pakistan, and Bangladesh were ‘normalised’ to having racial comments made at them.

Early generations of British Asians were accustomed to racism in schools. Such as ‘Paki Bashing’ days at end of school terms, where white pupils picked on Asian pupils due to their cultural differences.

Outbursts such as ‘go back to where you came from’, ‘you don’t belong here’ and uses of the ‘P’ word and ‘N’ word and other derogratory remarks related to race were part of living in those times.

For example, a person speaking in their own language such as Punjabi on public transport like a bus was reminded to ‘speak in English and not some foreign tongue’.

There were many horrific murders and killings during these very obvious racist times.

These include the killing of Altab Ali in 1978 in Whitechapel in east London, 18-year-old Gurdip Singh Chaggar’s murder in west London, Akhtar Ali Baig in East Ham in 1980 and the killing of in 1997 of Lakhvinder ‘Ricky’ Reel.

Protests and marches by the Indian Workers Association and other similar groups in London were frequent with coaches and buses of people joining them from around the country to fight against the fascism and racism experienced.

Racism in Britain has evolved over the years from being ‘in-your-face’ to it being institutional, subtle, and has even gone underground, due to the introduction of stronger racial discrimination laws.

However, one significant question that was born out of these older times is ‘where are you from?’.

The question was mostly asked with the intent to find out more about the background of a person, in what can be said to be for most asking, an educational exchange.

British white people from that era were inquisitive about the racial background of migrated people living in Britain and this question was part of the intrigue.

This leads to when, where and why, this question is still appropriate or not, in the 21st century.

The Question in the 21st Century 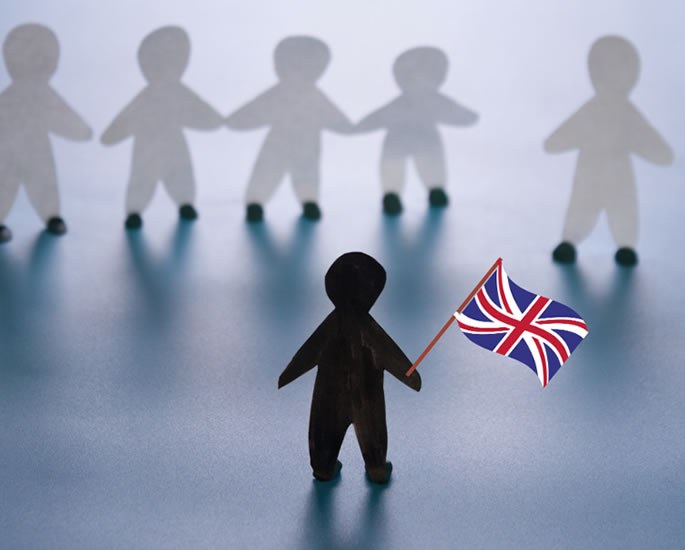 So, does this question ‘where are you from’ still have its place in this century and going forwards?

Especially, when multiple generations of people of colour are living in Britain and are simply ‘British’ i.e. born, bred, living and dying here.

There are many on social media who are disgusted at what took place with the charity campaigner Ngozi Fulani and Lady Hussey. Especially, in the way Lady Hussey interrogated her.

Fulani felt belittled and isolated by the questioning related to her race compared to other guests at the event.

However, some highlight that Lady Susan Hussey is 83 and comes from an era of British people who are ignorant or unaware of the changes in society, especially, around racism.

What needs to be discussed is how the question is asked and how it is perceived or answered by the person responding.

It is clear that Lady Hussey’s way of questioning does not have a place in the 21st century, including the touching of her hair to reveal her badge, which is another issue completely.

Many British South Asians have reacted to the incident and are questioning if ‘where are you from?’ is racist or not.

“When I’m asked where I am from. My first answer will be where I live – Birmingham.

“If I’m asked again regarding my origin, I will then happily share my heritage and roots with the person – my parents are from Punjab and my roots are from India.

“So, it’s never felt to me that the person asking me is being racist.”

“My heritage is Pakistani and I’m proud of it. So, when someone asks me this question, I love answering it.

“In fact, Pakistani taxi drivers often ask me the question and we end up having interesting conversations.

“I feel it depends on who is asking and how they are asking the question that matters.”

“I do not understand why my replying with my town where I live is not enough. Does it matter where I am from?

“I was born here and live here. So how does this make me different from the white woman walking next to me?

“I feel it is because of my skin colour that this question is asked, so yes, it is racially motivated and people asking such questions need to accept we are ‘British’.”

“When you live in predominately white areas in the UK, this kind of question will arise and you are asked it often.

“I have had older white women ask me the question when out shopping, as in ‘But where are you really from?’

“I have no problem answering it related to my heritage. Because, when asked in this way, I do not see it as racist at all because I bear in mind their age group and outlook.

“However, it does matter to who and how is asking. If it turns into some kind of interrogation, then, yes that is racist for sure.”

“I’ve had other South Asians ask me the question. Especially, those from India.

“Even if I say I’m from Manchester, the question is always asked additionally, ‘Yes, but where are you really from?’

“At this point, I know they want to know if I’m Indian, where in India my roots are from.

“I still say Manchester and England because I really do not know much about my heritage apart from being Indian. Which often baffles them!”

“If I’m asked this question which I have by both non-white and white people, I reply with the British city where I live.

“I do not see why I have to explain where my roots are from, what difference does it make? I’m British – end of.”

“This whole thing is ridiculous, I do not see how asking ‘where are you from’ is racist!

“If someone is curious about you and just wants to know more about you is it wrong to ask?

“Otherwise, we might as well all be the same and boring. Not having the chance to share the rich cultural differences we have in the UK.

“If I’m asked I love replying and telling people about my roots and the hard work my Pakistani parents and grandparents did to give me a great life here.

“There is a lot of confusion being put out there as to what is racist or not now and society is too reactive, especially, among the younger generations.

“What to understand is how someone is asking you such a question and the context.”

The Context and How it is Asked 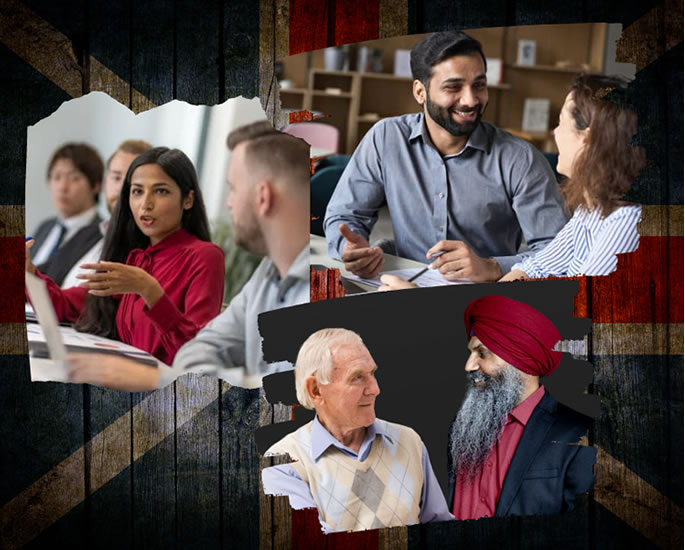 From these reactions from British Asians, it shows that there is even a divide among these responses as to how the question is being asked and the replies given.

The context of asking such a question matters significantly, plus the expectations for a specific type of response from the person asking.

As it stands, in this century will be deemed racist if the question is asked in the way it was by Lady Susan Hussey who was adamant to find out the origin Ngozi Fulani because she was a black woman.

However, it also depends on the person responding and how they perceive the reason behind the question.

If they are clear that there is a racist slur behind it, then, of course, it will be classified as racist.

Suspicions and jumping to conclusions can also contribute to it being labelled as racist based on judging the other person asking the question.

Conversely, another person being asked may see it as a curiosity on behalf of the questioner and happily engage in responding the best way they can.

How and the way we converse with each other matters tremendously.

Especially, when it comes to gaining a better understanding of the other person without making them feel uncomfortable or singled out due to skin colour.

Therefore, a better understanding of context and how such a question is asked needs to change – if the question ‘where are you from’ is racist or not.

Do give us your view in our poll below.

Amit enjoys creative challenges and uses writing as a tool for revelation. He has major interest in news, current affairs, trends and cinema. He likes the quote: "Nothing in fine print is ever good news."
Dr Ranj breaks Silence on Issue with British Curry Awards
TikTok Star Megha Thakur ‘unexpectedly’ dies aged 21