Two men were tragically killed in a horror crash in West Yorkshire. The crash happened shortly after their car was pursued by a police vehicle.

Two men in their 20s have died following a horror crash in the early hours of July 17, 2020, in Brighouse, West Yorkshire.

The two men, who have been named as Sohail Akhtar and Sohail Aziz, died after their car smashed into a road barrier on Bradford Road.

The incident took place shortly after 1 am after their vehicle was pursued by a police vehicle in the town centre. A short time later, their red BMW crashed into a road barrier.

Following the crash, the two men were pronounced dead at the scene. Their next of kin were informed.

Emergency services were at the scene and the area remained cordoned off for several hours.

One resident described it as “the worst crash” they had ever seen.

An investigation was subsequently launched by the Independent Office for Police Conduct (IOPC). The incident was referred to the IOPC due to the involvement of a police vehicle in the circumstances leading up to the collision.

One local said: “Drove past it this morning, I have never seen a car so smashed up in my life, it was mashed, totally.” 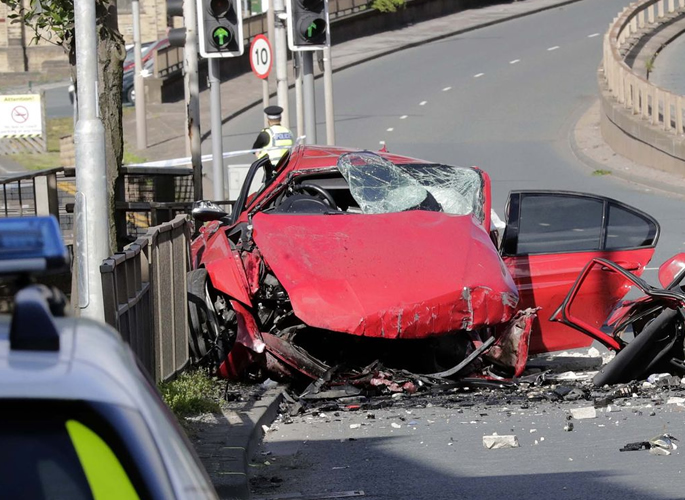 A Facebook page named Janaza Announcement posted about the crash, with many people extending their condolences to the families of both men.

One person wrote: “Absolutely heartbroken both of them were top lads. May Allah give their families patience during this difficult time.

“Words cannot comprehend what they must be going through.”

Another said: “This is terribly sad for all concerned especially their families… rip young men.”

And a third posted: “Condolences to the family and friends another great loss of young lives.”

Floral tributes were also left at the scene of the horror crash.

“This is a tragic incident and my thoughts are with the men’s family and friends and all those affected, including the emergency services in attendance.

“We sent investigators to the scene and to the post-incident procedures, where the two officers in the police vehicle provided statements to us.

“It is mandatory, when someone dies following police contact, that the matter is referred to the IOPC.”

“Our role is to establish and examine the circumstances of what happened; this work is already underway, and West Yorkshire Police is cooperating fully with our enquiries.”

A spokesman for West Yorkshire Police said they contacted the IOPC following the crash.

Dhiren is a journalism graduate with a passion for gaming, watching films and sports. He also enjoys cooking from time to time. His motto is to “Live life one day at a time.”
Man’s death after ordering from Takeaway sparks Investigation
Indian Man trying to Meet Pakistani Girlfriend got Lost at Border