Tributes Paid to Bradford Man who died in Car Crash

A wave of tributes have been paid to a 20-year-old Bradford man who tragically died in a car crash which involved three vehicles.

"We will cherish all the memories of him."

People have paid tribute to a young Bradford man following his death after a car crash on May 27, 2020.

Junayd Haris, aged 20, who lived in the Lumb Lane area, was rushed to hospital following the crash, which happened at the junction of Haworth Road and Chellow Grange Road.

A grey Mercedes, a red Toyota and a white Audi were involved.

Another 20-year-old and two 19-year-olds were trapped in the Audi after it ended up on its roof. They also suffered serious injuries.

Junayd’s funeral date has yet to be confirmed, but due to Covid-19 guidelines, only immediate family will be permitted to attend.

It was announced on May 31 that Junayd had died. This led to an outpouring of tributes for the Bradford man.

Many paid their respects in an online Book of Condolence.

Moorside Pharmacy wrote: “We would like to give our condolences to the family of Junayd.

“We have very fond memories of him from when he worked with us and are very upset by what happened. We will cherish all the memories of him. Love from all the staff at Moorside Pharmacy.”

Another said: “Was a good lad, open-hearted and very, very funny. Very bad day for the Bradford youngsters that knew him.”

Lucy Fitzpatrick added: “RIP Junayd. Such a kind-hearted lad. You will be missed so much. Thoughts and prayers with all family.”

Tahir Shah said: “Words can’t express how much you meant to us all, gone but never forgotten. Rest in peace bro.”

Junayd had just completed an engineering access course at Bradford College and was looking forward to going to university. 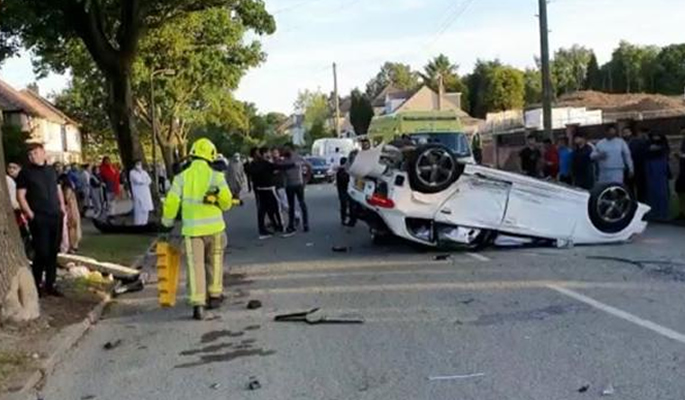 Isma Hussain said it was “horrifying” and left her and others at the scene in tears.

She explained: “It was a horrific event and has left us all shook.

“I didn’t see the crash, me and my mum were sat downstairs having tea when we heard the loudest bang ever.”

“There has been work going on behind our house and we honestly thought one of the big machines had toppled over or something.

“We saw it as soon as it happened. Within a couple of minutes, there were around 10 people surrounding the white Audi car and trying to find a way to get the boys out.

“It was the worst thing I’ve ever seen. No one thought about social distancing. Everyone ran to help these boys to get them out of the car. It was astonishing and such a proud moment.

Police want to speak to anyone who witnessed the crash, saw any of the vehicles prior to the collision or have dashcam footage that may help.

Enquiries show the Audi on Brantwood Oval and Brantwood Drive immediately prior to the collision.

Dhiren is a journalism graduate with a passion for gaming, watching films and sports. He also enjoys cooking from time to time. His motto is to “Live life one day at a time.”
Faryal Makhdoom reacts to Shahroz & Sadaf’s marriage
Solicitors Tried to sell £3m Properties without Owners Knowing