Two Men jailed for the Murder of Sukhjit Singh Dhariwal

Two men have been jailed for viciously attacking and murdering Sukhjit Singh Dhariwal who on his way home after a night out with friends.

The men repeatedly stabbed him in the leg many times

Two men who attacked and killed 36-year-old Sukhjit Singh Dhariwal on his way home from a night out in Hounslow have been jailed.

Sebastian Szlaski aged 35 and Dariusz Badek aged 19, were convicted of the murder of Mr Dhariwal at Kingston Crown Court on July 4, 2018, and were sentenced to a total 55 years in prison on July 19, 2018.

Szlaski was given 30 years in jail and Badek was imprisoned for 25 years.

During the hearing, the court heard that on December 21, 2017, Mr Dhariwal returned home from work and went to the Royal Albion pub on Albion Road in Hounslow to spend the early part of the evening with two friends.

Then, continuing his night out he went onto Gio’s bar in Hounslow High Street. At about 1.00am in the morning, he then headed home from the bar.

As Mr Dhariwal, a father of a young child approached the path towards his house, it was the first time of three, the two men attacked him.

The men hit him and pushed him to the ground before running away from the scene.

However, about ten minutes later, the attackers returned to attack Mr Dhariwal violently for the second and more prolonged time. This attack was caught on the local CCTV in operation.

The footage of this horrific and mindless attack was shown in court, where the two men are seen kicking, punching and stamping on Mr Dhariwal numerous times.

Then as he lay helpless on the ground, the men steal some of Mr Dhariwal’s possessions.

But this is not where it ends. Szalski and Badek returned home quickly to then ‘arm’ themselves with a knife.

While they were away Mr Dhariwal managed to make a 999 call to emergency services. A few minutes later, the attackers came back and set upon Mr Dhariwal viciously for the third time.

The men repeatedly stabbed him in the leg many times severing an artery and concluded their attack by punching and kicking the victim even more times, before fleeing the crime scene.

Police officers, paramedics and London’s Air Ambulance arrived at the crime scene and found Mr Dhariwal a few minutes later. They tried to save him but he was pronounced dead at 2.45am about 300 metres away from his family home.

A post-mortem examination of Mr Dhariwal’s found the cause of his death due to blunt force trauma to the head, and multiple stab wounds.

A reactive police investigation together with witness accounts led officers to seek out the home address of Szalski and Badek on Albion Road, where the pair lived together.

Blood on the front door handle of the address was immediately noticed by officers as they arrived at the address. Upon entering the property, officers found more blood stains.

Clothing with blood stains was found around the house and evidence of an attempt to burn their trousers, which when tested later, were found to contain traces of Mr Dhariwal’s DNA.

The two men were hiding in the attic of the property, virtually naked when they were subsequently arrested. 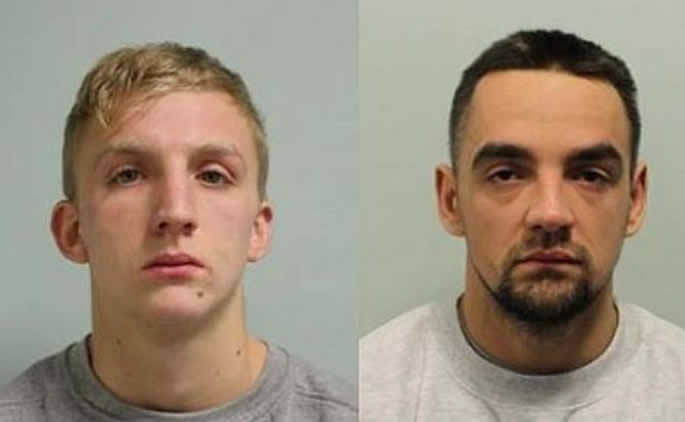 Officers seized the knife used to stab the victim and Mr Dhariwal’s possessions which were stolen from him, found at the property.

The two men were charged within 48 hours due to the amount of evidence against them and taken into custody. They appeared at Uxbridge Magistrates’ Court on December 26, 2017.

They entered a not guilty plea at a pre-trial preparation hearing on January 9, 2018.

The pair denied murder but were found guilty following the trial at Kingston Crown Court and subsequently sentenced to jail.

“This was a senseless and brutal attack on a young husband and father, costing him his life and leaving a small child to grow up without a father.”

“It is clear from the fact that the defendants left and returned twice, to further assault Mr Dhariwali, that their intent was to cause serious harm.

“In what has been an extremely traumatic time for Mr Dharwali’s family, I hope that the convictions can bring them a sense of justice.”

“This was a violent and unprovoked attack just days before Christmas on a man who had simply been returning home from a night out in his local area.

“The evidence, in this case, was strong and we relied upon witness accounts, CCTV evidence and DNA evidence. But the defendants continued to deny murder and showed no remorse for their actions despite the overwhelming evidence against them, which included the fact that they were found hiding in their attic having burnt their clothes in a fireplace.

“We thank the witnesses who supported this prosecution. Our thoughts are with Mr Dhariwal’s family at this time and we hope that this conviction and sentence provides some measure of comfort to them.”

Amit enjoys creative challenges and uses writing as a tool for revelation. He has major interest in news, current affairs, trends and cinema. He likes the quote: "Nothing in fine print is ever good news."
Indian Man Beaten Up for Trying to Take his Children
Pakistani Man kills Brother for Having an ‘Affair’ with his Wife