Sunny Leone sets pulses racing, as she stuns fans in a sexy Rocky Star dress. She wore her stylish look for a club appearance at San Jose in California.

She has received thousands of likes for the photos.

On 26th March 2017, she posted pictures of her outfit on social media, as she attended a club appearance at a San Jose club in California.

She received a positive reaction from her fans.

In the images, Sunny Leone wears a sexy, pastel sequined outfit with floral embellishments. The Rocky Star dress allowed the Bollywood star to show off her legs.

She completed the look with nude heels and a clutch bag, also created by Indian designer Rocky Star.

Sunny Leone also added a chunky bracelet and a fringed ear cuff that created an edge to her look. The actress appeared pleased to show off her dress and she thanked the designer as he styled her.

The actress appeared pleased to show off her dress and she thanked the designer as he styled her.

Felt so pretty in @rockystarofficial dress. Styled by Rocky and clutch and jewelry by him as well!! Love love. Thank you!!!

So far, she has received thousands of likes for the photos. Fans also commented, praising her sexy Rocky Star dress and complimenting the star. One fan on social media says: “Looking gorgeous.”

Sunny also posted another picture of her night out in San Jose. She appeared with her husband, Daniel Webber, and Raees director, Rahul Dholakia.

The Bollywood actress currently enjoys a holiday away with her husband. They first visited Cancun, Mexico and Sunny documented the travel through her social media pictures. She treated fans to pictures of her on the beach. 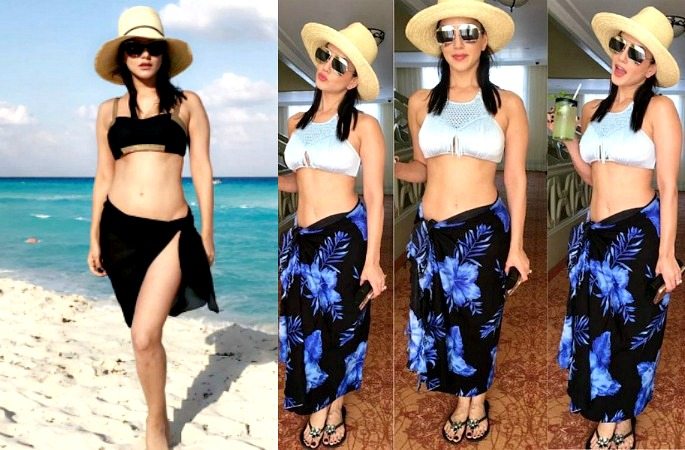 While she undoubtedly will enjoy this breakaway, she will jet off to more stunning locations. On 30th March 2017, she will also travel to Dubai as part of the Gitex Shopper Spring Edition 2017.

“We are excited to have her as our brand ambassador. Her beauty, grace, elegance, confidence perfectly captures the essence of our products, which are crafted with care to look elegant, stylish and graceful.”

“We are confident our association with Sunny Leone will provide the brand with an extra edge to stand out and get noticed in the market.”