The latest buxom beauty looking to break the Internet is Sunny Leone, with the release of her music item number, ‘Desi Look’ for the film, Ek Paheli Leela.

"It was Sunny's idea to pick the pink bikini, its Daniel's favourite too."

Bollywood actress, Sunny Leone has stunned with all the right moves in the first music video release for her upcoming thriller, Ek Paheli Leela.

‘Desi Look’ is a sensual up-tempo club song that will have you thrusting some jhatkas on the dance floor. 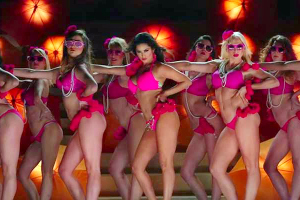 Kanika and Sunny are a proven item number duo, with their last song ‘Baby Doll’ from the film Ragini MMS 2 (2014), being considered one of the best tracks of 2014.

It even earned Kanika the ‘Best Playback Singer (Female)’ gong at the 60th Filmfare Awards.

Actress Sunny pulls out all the stops for this music video, even more so than she did with ‘Baby Doll’. She dons a number of sizzling outfits, as well as busting some well choreographed moves with an entourage of backing dancers.

Sunny tweeted out her excitement of the video release to her followers: 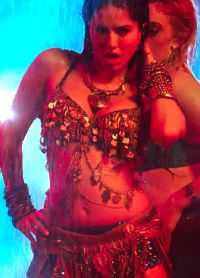 Sunny’s ‘Desi Look’ is made complete with a series of hot bikini ensembles that take your breath away.

She even dresses up as a Desi Victoria’s Secret Angel, with a black crystal bikini top, pink sash, and pair of pink ruffled angel wings.

All of the outfits were designed by Mumbai based, Hitendra Kapopara. Sunny also tweeted the designer saying:

“All the costumes you love from”Desi Look” were all created by @hitendra1480 for @LeelaFilm thanks for making me feel so GORG Hitesh!Love ya!

“I know you spent days making those look alike VS wings to make this shoot epic!! @LeelaFilm @hitendra1480 you’re a rock star!!” 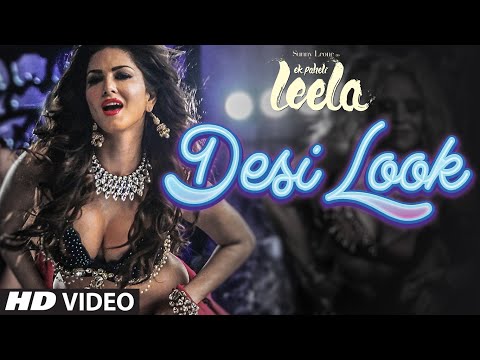 The buxom babe also sizzles in a pink bikini which was reportedly a Valentine’s gift from her husband, Daniel Weber.

A source claims: “It was a Valentine’s Day gift from her husband Daniel Weber. She phoned Daniel, who was to join them on the set later and he got the outfit along. Similar pink bikinis were then made-to-order for the background dancers.”

Debutant director, Bobby Khan confirmed the rumour saying: “We were looking for a perfect bikini for Sunny.

“We had four trials but none of the swimsuits worked. It was Sunny’s idea to pick the pink bikini, its Daniel’s favourite too.” 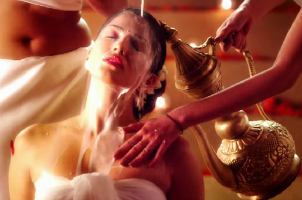 Another scene in the video sees Sunny being bathed by her ladies in waiting. Our resident DESIblitz Gossip-wali, Monika told us that Sunny was actually rumoured to be bathing in 100 litres of milk!

Unfortunately, this was a bit of a task for Sunny as the shoot took place in cold Rajasthan and the actress even developed a few rashes after the shoot.

Sunny Leone is playing a double role in Bobby Khan’s dramatic Ek Paheli Leela. A reincarnation thriller, Sunny will be seen playing both a London supermodel and a Rajasthani princess.

The film sees TV actors Jay Bhanushali and Mohit Ahlawat in lead roles alongside Sunny. Fans can catch all the sensual action when Ek Paheli Leela releases in cinemas from April 10, 2015.

Aisha an English literature graduate, is a keen editorial writer. She adores reading, theatre, and anything arts related. She is a creative soul and is always reinventing herself. Her motto is: “Life is too short, so eat dessert first!”
Indian Summers stirs up Trouble in Paradise
Martin Scorsese helps preserve Old Indian Cinema