Strictly Come Dancing, the popular Saturday night BBC television series is embroiled in a racial row after the professional dancing partner of Laila Rouass called her a “Paki.”

It’s claimed by the News of the World, a UK newspaper, that Anton Du Beke, Laila’s dance partner in the show said, “Oh my God, you look like a Paki,” after she had a spray tan.

Anton has admitted making the comment but insists his slur was ‘in jest’, and denies that the remark being racial. He has since apologised for any offence caused by his remark.

“I must say immediately and categorically that I am not a racist and that I do not use racist language.”

He added, “During the course of rehearsals Laila and I have exchanged a great deal of banter entirely in jest, and two weeks ago there was an occasion when this term was used between the two of us.” 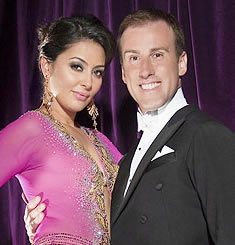 It’s reported that Laila walked away from the situation after the remark was made. The comment made by Anton was on Thursday, two days before the show on 3rd October 2009, and 15 people heard the remark including other professional dancers.

Anton being accused of racism, said, “There was no racist intent whatsoever but I accept that it is a term which causes offence and I regret my use of it, which was done without thought or consideration of how others would react. I apologise unreservedly for any offence my actions might have caused.”

Actress Laila Rouass born to Moroccan parents in 1971, studied in the UK and left her studies to travel in India for a few months which turned into six years. Whilst living in Bombay, she worked for MTV, BBC, and TNT. Spotted by Indian/Italian director Aditya Bhattacharya, Laila had her first break in film, when she went to Messina in Italy to star in his Senso Unico (1999).

Laila, aged 38, the star of TV shows like Primeval and Footballer’s Wives, has accepted Anton’s apology and said, “It was a situation which happened that we have moved on from and I accept his apology. I’m really enjoying the show and dancing with Anton and hope we can go as far as possible in the competition.” 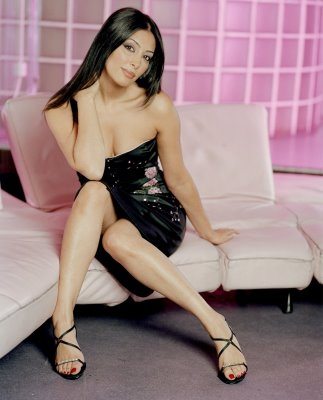 The BBC’s reaction to the incident was made with a statement, “The BBC does not condone offensive language in the workplace.”

This is not the first time the couple have been involved in an incident of racial connotations. During the first meeting between the dancers and celebrities, Anton took a jibe at Laila’s Moroccan descent, “Oh no! You’re not a terrorist are you?” It was reported that the remark upset Laila at the time despite the fact she laughed it off and told Anton that he could not say things like that, and if it was meant to be a joke, it was in very poor taste.

Other stories involving Laila Rousass include doubts cast over the truth of her marriage to her ex-partner Nasa Khan with whom she had a two year old daughter Inez in 2005. Reacting to this she said, “We had a religious ceremony with witnesses from both sides, followed by a reception for family and friends.” She added “It’s such a ridiculous story that someone would give me a ring apparently worth £60,000 on our wedding day and yet it wasn’t our wedding day.”

So, yet another racial remark is made in the media limelight and an apology seems to have addressed the matter. Or has it?  Other similar examples, forced the offenders to resign from their positions such as Ron Atkinson for his off-mic racial remark against Chelsea footballer at the time, Marcel Desailly. When Ron said, “..he [Desailly] is what is known in some schools as a lazy thick nigger.”

Should Anton have left the show for his remarks against Laila? Or is it okay for ‘jest’ to be used as the protection for racial ignorance and prejudice? What do think should have happened in this case?

Baldev enjoys sports, reading and meeting people of interest. In between his social life he loves to write. He quotes Groucho Marx - "The two most engaging powers of an author are to make new things familiar, and familiar things new."
Sukshinder Shinda talks Music, Composing and Singing
Jay Sean No. 1 in USA Charts