"The Strictly professionals have never done any form of Bollywood dance before."

Bolly Flex and the professional dancers took to the stage with ‘One Two Three Four Get on the Dance Floor’ from Chennai Express, and the hugely successful Pussycat Dolls collaboration with A R Rahman, ‘Jai Ho’.

Elated with the impressive performance, Bolly Flex founder Naz Choudhury tweeted: “Huge thank you to @bbcstrictly for giving us such amazing #Bollywood experience, we all at @BollyFlex loved it.” 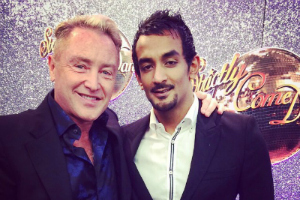 He added: “Not just for creating performing #bollywood on #StrictlyComeDancing for the first time but to also to meet one of the biggest inspirations & idols in my life #michaelflatley !!!”

Before the show, Naz Choudhury said: “It’s a huge honour for me to be given the opportunity to choreograph and perform in such an amazing show.

“All the dancers at Bolly Flex are really excited to perform with the professionals of the show. Rehearsals have been amazing and all the pros from the show are wonderful to work with.”

“Bringing Bollywood to a platform like Strictly Come Dancing is a huge breakthrough for the Bollywood industry in the UK and I feel honoured to have been able to facilitate this.”

“The Strictly professionals have never done any form of Bollywood dance before. It is a challenge for both them and us to make an entertaining package accessible for all audiences.

“They have worked impeccably hard and taken a real interest in the intricacy and expression element of Bollywood dance.” 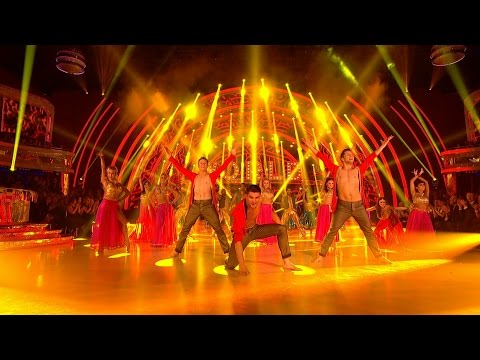 Navin Kundra also excelled with his guest vocal appearance during the show. With a big thumbs up, Jaz Dhami tweeted out: “Just watched back @bbcstrictly Bollywood performance and noticed @NavinKundra well done mate feels good to see you repping!”

Navin also tweeted his fans saying: “Thanks for all ur messages! It was a magical experience singing on @bbcstrictly with the amazing @SCDband @BollyFlex & #StrictlyProDancers.”

Television presenter, Caroline Flack soared to the top of the leaderboard with performance of the Charleston to a Turkish theme, with the soundtrack ‘Istanbul’. 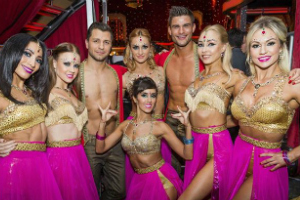 Pixie Lott, who has been growing in popularity, performed the Viennese Waltz, alongside Trent Whiddon. Their theme for the show, was The Netherlands, and danced to ‘Tulips from Amsterdam’ by Max Bygraves.

Frankie Bridge, who is considered one of the favourites to be crowned the winner, performed the Jive with partner, Kevin Clifton. The American dance was accompanied by Beach Boys’ hit ‘Surfin’ USA’.

The Eastenders star, Jake Wood, and his partner, Janette Manrara, performed the Argentine Tango, with a Greek theme, to the song ‘Zorba the Greek’.

British Asian TV star, Sunetra Sarker, was the most recent contestant to leave Strictly, on Sunday 30th November 2014. Alongside professional partner Brendan Cole, Sunetra found herself in the bottom two places for the third time.

In the dance-off, the pair performed the Rumba to ‘Girl From Ipanema’. All the judges unanimously voted to save reality television star Mark Wright and his professional partner, Karen Hauer, who progressed to the following week’s quarter-final. They danced their Salsa to Elvis Presley’s ‘Viva Las Vegas’. 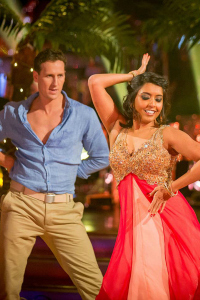 Sunetra said: “It’s been such a once in a life time opportunity to be able to do this. I’d like to thank Brendan for being just so committed and understanding, and such a natural dancer, this guy. You’ve been great.”

Brendan said: “She was a dancer from the beginning, I am extremely proud of her. You should be very proud of yourself to get this far. It’s no mean feat!”

Best known for her role as Dr Zoe Hanna in BBC’s Casualty, Sunetra has enjoyed increasing publicity since joining the televised competition.

However, various media outlets say Sunetra might have been a victim of the ‘Strictly curse’, after she split from her husband.

But with an increasing openness towards British Asian contestants and lavish Eastern performances, could we be seeing more Bollywood dance entertainment on Strictly in years to come?