"It has returned me to spiritualism in a strong way."

Described as a spiritual album, the style of music is relaxing, soothing and very meditative.

The seven tracks on the album feature a wide variety of sounds including: the Mumbai choir, Bamboo Flute, Dholak, Toombi, Guitars, and Tabla.

Talking about Sanctuary, Bhamra said: “It has been transformational for me producing this album and I feel that it has returned me to spiritualism in a strong way.” 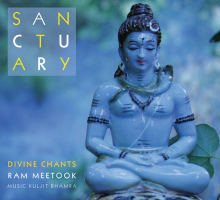 Sanctuary will be released on Bhamra’s own independent record label, Keda Records.

This spiritual essence of Sanctuary, is largely down to Bhamra’s collaborator on the album, Ram Meetook. Born in Mauritius to a deeply religious family, Meetook has dedicated his life to the spiritual and meditation practice.

Speaking about Ram, Bhamra says: “Ram’s voice is very unique. He has a deep, earthy and distinctly recognisable tone.”

Now settled in the UK, Meetook has strongly embraced his Hindu beliefs through his music and has kept his roots alive.

Meetook spends the summer months in London, at the Chelsea Physic Garden, where medicinal plants are cultivated. He says that the peaceful atmosphere has helped him to nurture his soul.

Bhamra is best known for his work in popular British Asian films such as Bend it like Beckham (2002) and Bhaji on the Beach (1993), and in the musical Bombay Dreams (2002). 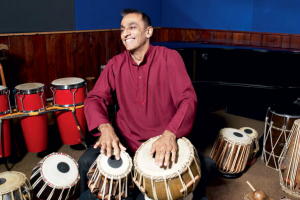 Born in Nairobi, Kenya, in 1959, of Punjabi Sikh parentage, he settled in Southall in 1968, which he has considered his hometown ever since.

Bhamra started out as a tabla player and percussionist. He was recognisable for being seated while playing the tabla, rather than the usual practise of sitting cross-legged on the floor. This was due to contracting polio at the age of one, which affected his left leg.

In the eighties, he was one of the most prominent Bhangra music producers. His highly acclaimed portfolio includes: ‘Rail Gaddi’ by Chirag Pehchan, ‘Giddha Pao Haan Deo’ by Mohinder Kaur Bhamra, ‘Aaj Tenoon Nachna Pao’ by Mahendra Kapoor, and ‘Nachdi Di Gooth Khulgaye’ by Premi.

Bhamra’s career was profiled in the 1992 movie, Confusion, which was a Black Arts Video Project, funded by the Arts Council of Great Britain.

Bhamra’s work in theatre has included being a composer and director for a 2001 Birmingham Repertory Theatre production of the Hindu epic, the Ramayana. This was later performed at the Royal National Theatre in London.

Between 2002 and 2004, Bhamra performed as on stage percussionist in Andrew Lloyd Webber’s musical Bombay Dreams at the Apollo Theatre, in London’s West End.

The collaboration between Bhamra and Meetook has created an original and vivid sound that many listeners will enjoy. Sanctuary is an album that will bring tranquillity to the mind and soul.