"I could put more colour and more feeling into the music"

Kuljit who was born in Nairobi, Kenya during 1959 comes from a musical family, with his mother Mohinder Kaur Bhamra also being a singer.

Contracting polio at the age of one, resulting in his left leg being affected eventually led him to play and master the tabla whilst sitting down.

Kuljit came to the UK with his mother in 1961. His father had come earlier to study civil engineering in England. After studying at Southhall Grammar School, Kuljit went to Middlesex University, training as a civil engineer.

Musically, he initially performed with his mother before producing popular albums and songs. 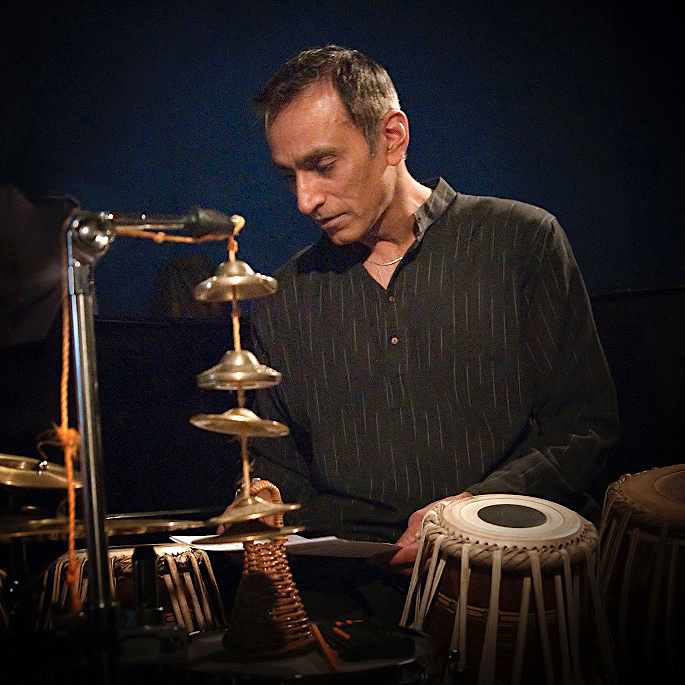 He went onto work as a composer on several Hollywood projects and British films, including Bhaji on the Beach (1993). Kuljit has also worked as a composer and performer for theatre and musicals.

In an exclusive rendezvous with DESIblitz, Kuljit Bhamra reveals more about his humble beginnings, career, love for the tabla, notation system and advice for young talent: 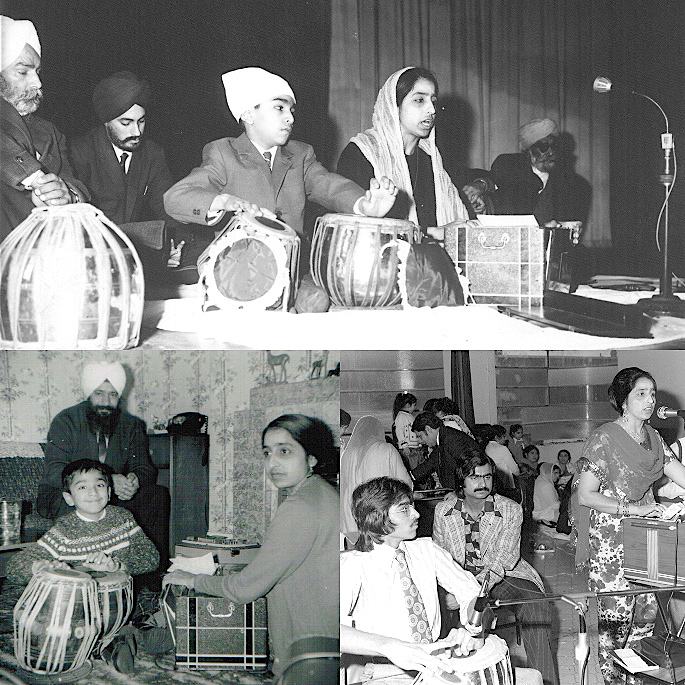 The musical career of Kuljit began when he was pressured to play the tabla from a young age.

When coming to England from Kenya, a six-year-old Kuljit would often assist his mother Mohinder Kaur Bhamra, playing percussion instruments as she sang hymns at the Gurdwara.

Kuljit and eventually his two young brothers were regularly performing with their mother. Kuljit reveals a big turning point early on in his career:

“We performed at the wedding of Tarsem Purewal who was the editor of Des Pardes in Southall.

“And when he got married, he said to my mum, ‘I want you to perform the Anand Karaj (blissful union). And also I want you to sing some songs afterwards.’

“Now in those days, people didn’t do that at all. We got some songs together. My brother played the tambourine.

“And so we performed a few songs and because…. there were high profile people at his wedding, they all started booking us in for future weddings.”

As a result, the family were performing at over 100 weddings a year during the late 70s and early 80s.

They later went onto partner up with Punjabi singer AS Kang, performing with him for about ten years. AS Kang was taking care of bookings in the Midlands.

Thus, Kuljit was travelling from the south and north to perform at such events.

During these journey’s Kuljit and the band got to develop and enhance their musical skills. Describing the band, Kuljit mentions:

“We were a bit like DJs actually because we…knew which song to sing at what time. And in those days there was no dance floor.

“So we, we moved tables out of the way… to create a dance floor. Also, there were very few Punjabi songs that actually said, come and dance.”

“And then there was one time when my mum  had ‘Gidha Paan Haan Deo’ and AS Kang had ‘Gidhian Di Rani.’

“Those two songs actually were inviting people to dance.”

That was an amazing time for Kuljit and the band, with so many people including musicians coming to watch their performances. 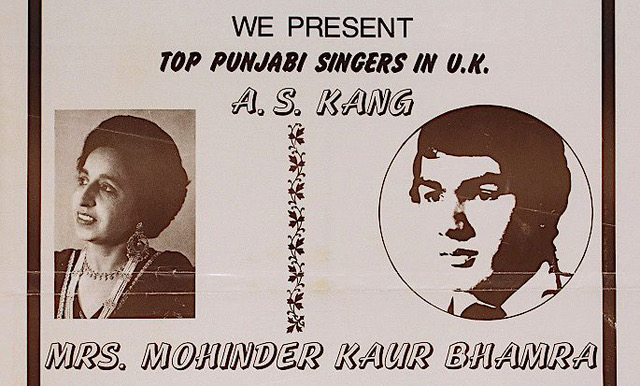 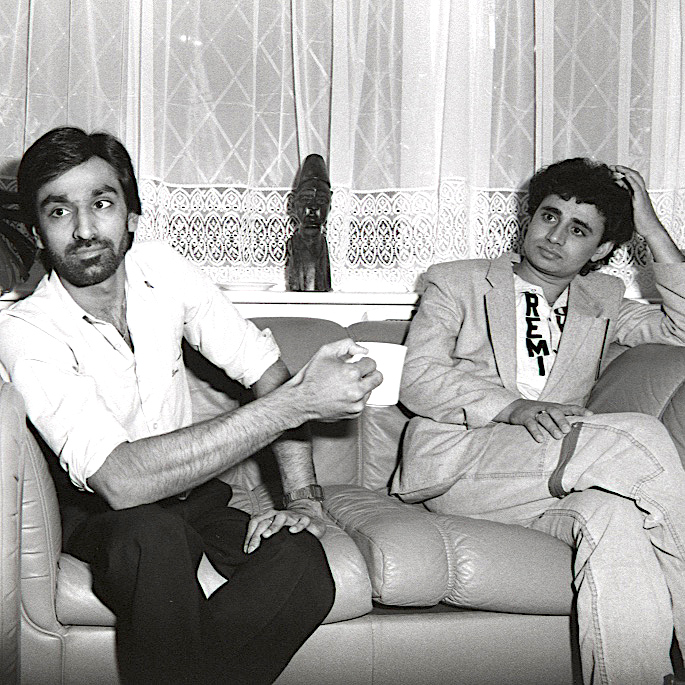 His first recording experience came when working with AS Kang for the album Jawani (1976). Featuring his mother as the singer, the album recording took place at Zillah Studios.

His role in the album was of a tabla player. Despite having no involvement in the production side of the album, Kuljit Bhamra has good memories of it:

“It was really great to play something, and then suddenly it was out on record and you could hear it again. People were buying it. So it’s very flattering and sort of gratifying that your music was being heard.”

Kuljit enjoyed working with the band Premi, particularly on the first album by Johal.

However, the big game-changer for Kuljit came when collaborating with Mangal Singh from Wolverhampton on the classic album Rail Gaddi (1987)

Kuljit states with Mangal being a “Bollywood Style Singer”, he had more scope:

“His singing had a bigger scope, so I could put more colour and more feeling into the music. And it… just gave me more scope to work with.”

He also musically admired Sangita who was a great singer from Leicester. Kuljit expresses the reasons why he always enjoyed working with female artists:

“I loved working with women mostly. I mean, I don’t know if it came from my working with my mother, but I thought women had more to say, and it was more emotional.”

Kuljit was one of the first artists to pioneer early bhangra sound working with Bhangra bands. For Kuljit, it was truly a wonderful experience to work with various artists who had their own “style and characteristics.”

Kuljit sheds light on some of his fondest memories working with such artists:

“Some guys needed to drink three bottles of whiskey before they even got in front of the microphone.”

“Some guys wanted to turn the lights off in the studio. Then you couldn’t see where they were. Some people didn’t even know how to record.”

Keeping in view that each band had their own style, Kuljit tried to produce music, which was more tailor-made for each group.

Kuljit states that he always had a good laugh in the studio with artists, setting a positive tone:

“When you work in a studio, the mood gets recorded. I really believe that.”

“The music can be really brilliant technically, but… if there’s no happiness in the studio, that record is not going to sound good.

“As a producer, my job is to make everyone happy so they can perform the best and that happiness gets recorded in the record.”

Such a happy environment reflects on the great attributes of Kuljit, particularly his management skills and humbleness. 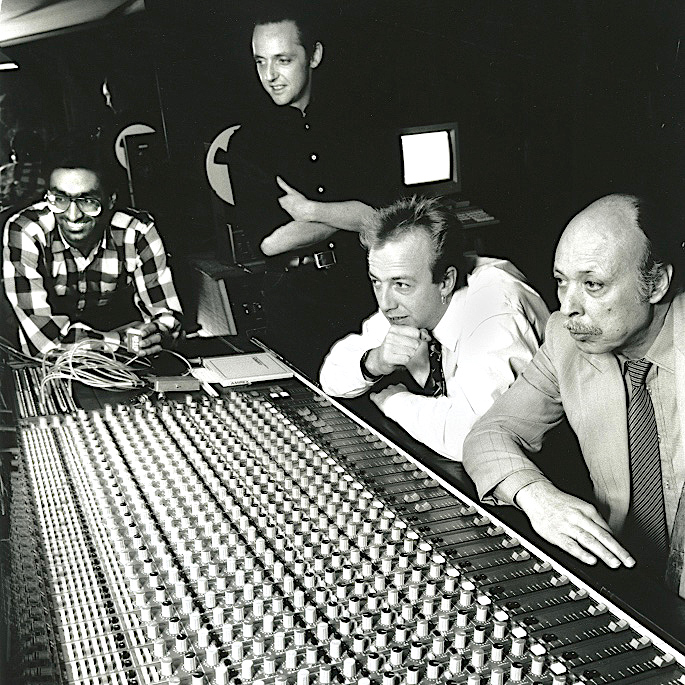 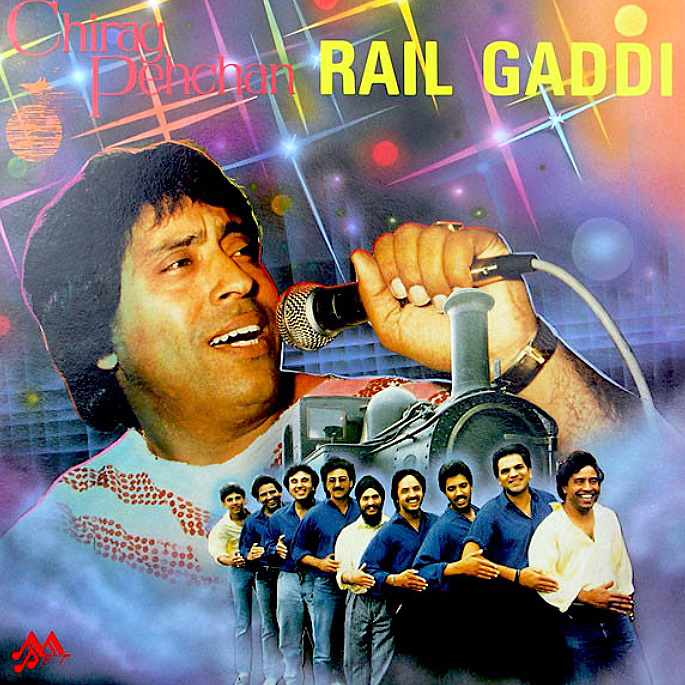 Kuljit Bhamra classifies artists into two categories. He claims there are some who like to show their ego and pretend that they can sing.

Whereas he has worked with the likes of Gurdas Maan and Mahendra Kapoor who are amazing singers that do not boast of their vocal credentials.

Using his own example Kuljit explains the difference further:

“I’m in the music business and I’m not in show business. I have to show my talent. Because people want to see it, but I would rather not get on stage. And I’m not really a stage guy. I’m a musician.

Kuljit believes producing an artist can always be challenging. Kuljit has never forced any artist to do anything against their wishes. For Kuljit, it is important that the artist agrees to his style of music. He also mentions:

“The challenge has always been trying to get something,g which is artistic, but successful commercially, and that’s really difficult to do.”

This was the case with Rail Gaddi, as Mangal did not really want to do a track on trains. But on this occasion, Kuljit and others managed to convince him about the commercial element of the song.

Kuljit also alludes to the fact that some artists are not aware of how the music business works:

Kuljit told us that it is more challenging when working with a band as they have their own unique “identity and sound.” In the case of a band, it was important that the group had the leeway to fully express themselves. 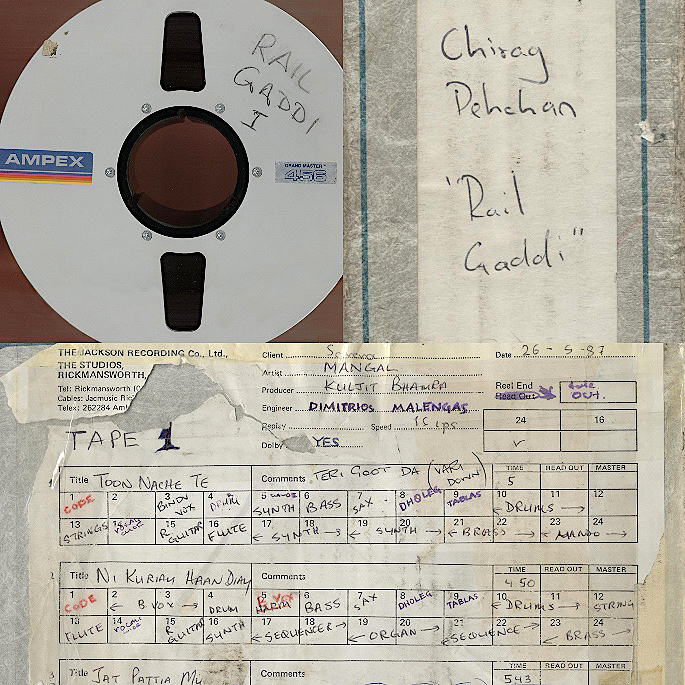 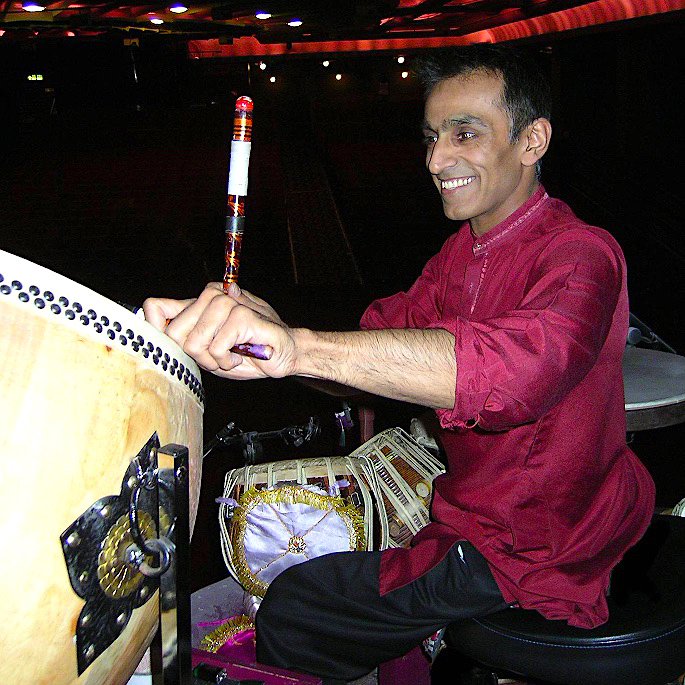 Kuljit Bhamra has been fortunate to work on some interesting projects, including theatre, Hollywood films and British movies such as Bhaji on the Beach (1993).

When comparing desi projects to western, Kuljt points out timekeeping as one key difference.

Additionally, he went on to say that whilst the DESI community were on a journey of learning, the western system was more established.

He also adds about discipline in “attitude and behaviour”:

“Indian musicians are trained not to play the same thing again and again. We get pleasure out of doing something different. Everyone goes, ‘wah, wah, wah.’

“No difference at all, even to the minus stroke. And that’s a challenge if you’re taught to play.”

Despite the differences, Kuljit does not favour either to be better. When it comes to music, Kuljit feels that the Punjabi music scene has lost its magic, considering it once produced popular albums in the 70s and 80s.

Kuljit educates that in those days, people were recording Live and then releasing their music. He describes a record, as something, which has data in it. For, Kuljit it is like “listening to what they did.”

On the other hand, Kuljit believes whilst DJ’s are reliant on computers, it is not the same thing:

“You can make a whole record in your computer, and there’s nothing wrong with that, but I don’t call that music.

“That is nicely organised sound that is not music.”

“For me, music is played by real people with all the mistakes, with all the warts and everything, and all the joy that is music.

“Computers make perfectly arranged sound, but everyone that has the same computer is going to produce the same sort of sound, which is why I think a lot of bhangra songs now, even pop songs, they all sound the same.”

Kuljit is of the opinion that having a Live orchestra is preferential as you get to create, along with learning new skills and acquire an “artisan quality.” Meanwhile, he feels computers can enhance the music.

Trusting the planet and nature, Kuljit believes the magic of Live music will cycle and come back again, especially with vinyl sales exceeding digital in 2016 and youngsters wanting to learn the tabla and dhol. 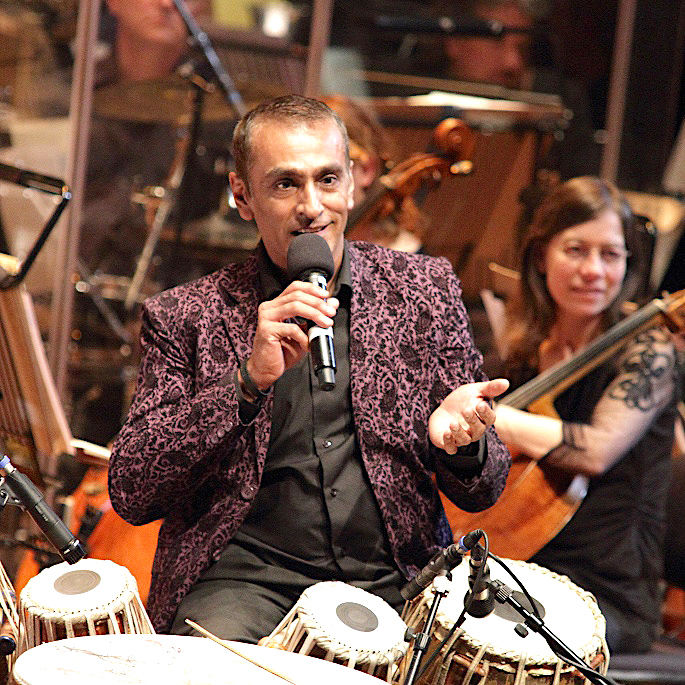 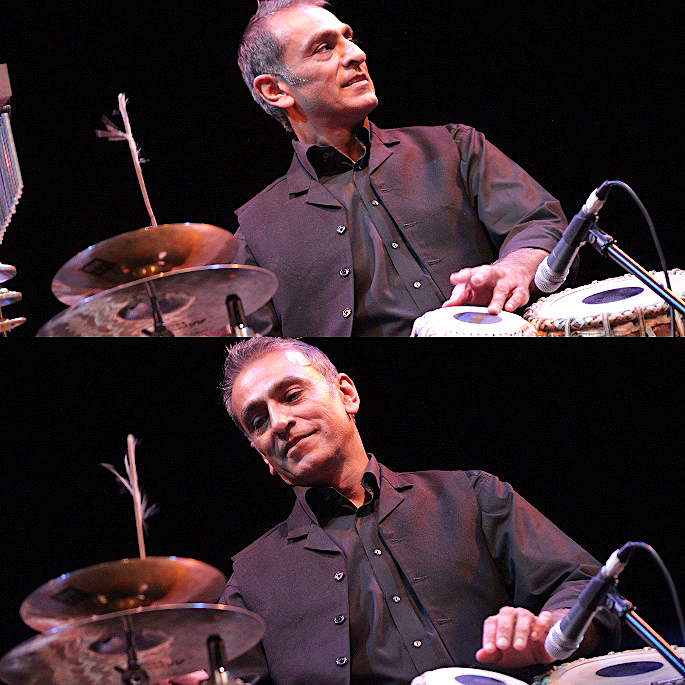 Defining it as as a crazy instrument, Kuljit loves the tabla for its diverse range of sounds and pitch. He says for many non-Indians its like a Bongo.

According to Kuljit when non-Indians are listening to him performing a tabla solo for 10-15 minutes, they have a few fascinating questions on their mind:

“What is that and how is the sound coming out of that? And is he playing that, you know?”

Comparing the tabla with other drum instruments overall, Kuljit mentions:

“All drums have opened and closed sounds. The tabla has more range of open sounds than any other drum that I know.”

Commenting on his favourite taal, Kuljit said he likes Rupak, which has seven beats.

In 2017, Kuljit and Keda music introduced a notation system for the tabla at Smethwick Library, Birmingham on October 25, 2020.

There were two purposes for this system. Firstly when he was working on Bombay Dreams by Andrew Llyod Webber, it was not physically possible for him to be at the West End for eight shows a week for two years.

The solution he had to this problem was “writing it down so that it could be replicated.”

Secondly, it is a system where individuals who know basic music can follow textbooks as part of a three-module course to read and play the tabla.

The idea was to also roll this system out in educational establishments. 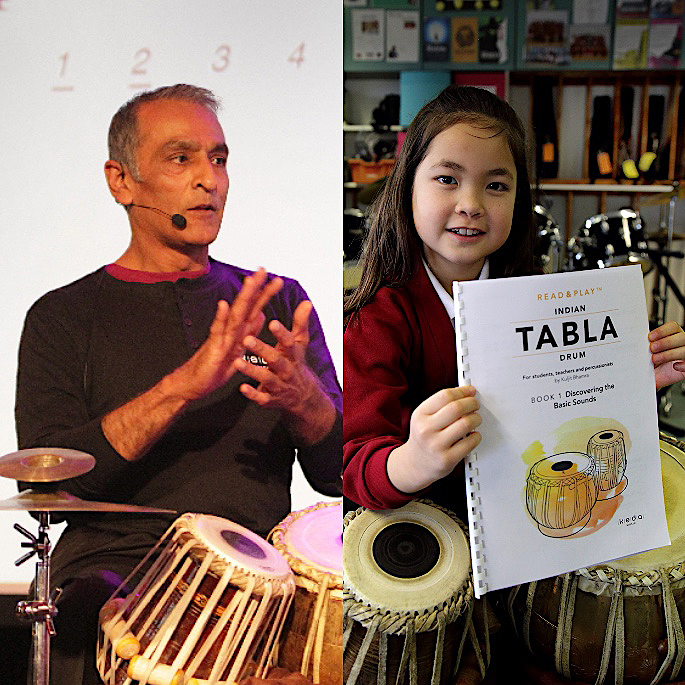 With his efforts, more people will play this percussion instrument more, as well as an increase in sales of the instrument.

Kuljit continues to enjoy collaborating, as it provides an exciting alternative for a musician who normally does the same sort of thing.

Kuljit encourages young musicians to be passionate and give it their best.

In recognition of his services to Bhangra and British Asian music, Kuljit was awarded an MBE in the Queen’s Birthday Honours list 2009.

The University of Exeter also awarded him an honorary Doctorate in July 2010. Additionally, he has received many Platinum and Gold disc Awards for his hit tracks.

Kuljit is not just stopping there. He has compiled several educational and informative series on his Offical YouTube channel, which can be accessed here.

Whilst Kuljit Bhamra educates others, he continues to learn and be creative. His musical voyage and discovery are never-ending.