The Pakistan Super League (PSL) recently released their 2020 anthem in the build-up to the tournament. Let’s find out what people thought.

“Worst ever anthem of the PSL."

The Pakistan Super League (PSL) is fast approaching and to get everyone in the cricketing spirit, the PSL has released its official 2020 anthem, ‘Tayyar Hain’ on Tuesday, 28 January 2020.

Over the last four years, the Pakistan Super League has a tradition of releasing an official anthem in the run-up to the tournament.

It was composed by Xulfi and the official video was directed by Kamal Khan who is best known for the Pakistani crime thriller, Laal Kabootar (2019).

In the video, fans can be seen celebrating the homecoming of the T20 league. This is the first time that the entire league will be held in Pakistani since 2009.

As a result of the unfortunate attack on Sri Lanka’s team bus in Lahore, March 2009, foreign players refused to travel to Pakistan over safety concerns.

Since then, the Men in Green were forced to adopt the United Arab Emirates (UAE) as their second home.

After years of cricketing isolation in the country, Pakistan is set to welcome back the entire PSL league matches on home soil starting February 20, 2020.

Despite this nationwide excitement, it seems the anthem has failed to impress fans of the game. One Twitter user by the name Sardar Adnan Imran said:

“Worst ever anthem of the PSL. Expectations were so high and in the end when I heard the anthem it was like ‘5 mint waste Kar die.” (5 minutes wasted).

Worst ever anthem of the PSL ?
Expectations were so high and in the end when I hear the anthem it was like "5 mint waste Kar die" ?#TayyarHain pic.twitter.com/IlUpO3gTE0

In particular many took to Twitter to ridicule Asim Azhar’s performance in the video. One user said:

“So January wasn’t Coronavirus and WW3 (World War Three) enough that you gave us Asim Azhar on a PSL song?”

A Twitter called Chatter box said: “No one can match the level of Ali Zafar’s PSL anthems.”

Faizan Rasul took to Twitter to share a picture of a horse that started on being drawn well but got worse.

He captioned it: The official journey of #PSL anthems all 5 seasons #TayyarHain #PSL2020.”

Unfortunately, it seems the PSL Anthem 2020 has miserably failed to impress cricketing fans in Pakistan. We will have to wait and see if the anthem manages to attracts fans during the PSL or if it continues to draw criticism. 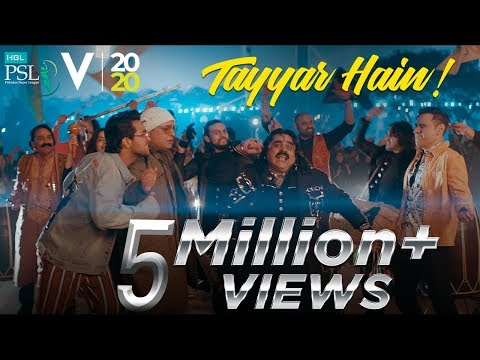 Ayesha is an English graduate with an aesthetic eye. Her fascination lies in sports, fashion and beauty. Also, she does not shy away from controversial subjects. Her motto is: “no two days are the same, that is what makes life worth living.”
12 Best Bollywood Dances by Hema Malini
Kuljit Bhamra: A Tabla Maestro and Musical Explorer