"I have offered my best efforts to pull off something never before seen in a Bollywood dance performance."

On Sunday 30th November 2014, the REP Theatre in Birmingham witnessed a dazzling show of music and dance by a young and dynamic dance troupe led by Subhash Viman Gorania.

The range of choreographic vocabularies that BollyDynamix implemented in their 12 performances included hip-hop, urban, contemporary, and classical Indian dance styles.

Those in attendance were mesmerised by the youthful energy of the whole production. 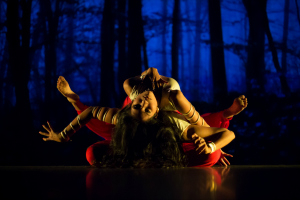 Lasting just over an hour, the show was punctuated by an interval, to give the captivated audience a chance to catch their breath. Only to then have it taken away again in the second act.

Speaking exclusively to DESIblitz, Subhash tells us: “BollyDynamix has been my prime focus over the last year and one of the most exciting aspects has been about amalgamating the variety of skills and styles of the dancers involved.

“The aim is to raise cognisance of Bollywood dance in the UK and through BollyDynamix, I aspire to inspire dancers with a robust background of choreography ranging from hip-hop, urban and contemporary to Indian classical dance styles.”

As Subhash explains: “Bollywood stands today as a global representation of the abundance of culture in the arts.

“With extensive diligence and risk-taking, I have offered my best efforts to pull off something never before seen in a Bollywood dance performance.” 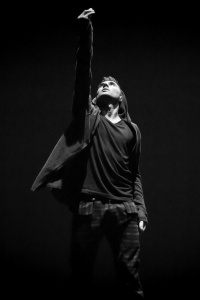 Interpretation of arts can be subjective, and in this production, there were many universal themes coursing through.

Some music artists order their songs in an album to articulate a particular narrative, which is like going on a journey from the start to the end. It seems that the BollyDynamix team orchestrated their performance in a similar fashion.

This journey, that BollyDynamix invited its audience on, portrayed and inspired different emotions such as love, happiness, sadness, fear, hope, jealousy, ecstasy, and introspection.

Art is a spiritual pursuit and it is also about artistic performers exploring these within themselves, as well as communicating these to the audience.

The transitions were fluid as one piece flowed to the next. However, the constantly varying tempo, themes, and emotions meant that the audience were always kept on their toes.

For example, the third piece, ‘Mere Dholna’, was about a sweet celebration of innocent love. This was followed by ‘Andh’, which delved to the dark side. Set deep in the woods, the three dancers, dressed in neon yellow tank tops, and resembling Keira Knightley’s portrayal of Guinavere from the film, King Arthur, explored the idea of self-suffering.

Then the tempo was brought back up with the Latin-inspired ‘Piya Tu’, which with its energy and vibrancy harked back to old school Bollywood. As with all the pieces, the costumes brought the colour and life to the spectacle.

The show opened with the only live music performance of the night, ‘Teri Deewani’. The soulful singing of Bhavin Solanki, in his debut performance in this setting, accompanied by guitarist Indy Sagoo, created a powerful performance.

Another highlight came after the interval, with a Sufi Kahtak performance, ‘Khwaja’. With spiritual undertones of surrendering to the almighty, the flowing robes of the whirling dervishes was extraordinary. 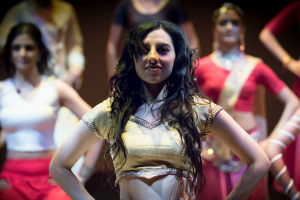 The garba beat for the penultimate piece, ‘Dhola Maru’, stimulated a roar from the crowd. At great speed the dancers weaved in an out of each other. As a viewer, watching pirouette after pirouette, you find yourself wondering: “How are they not dizzy?”

Sam Eccles’ lighting complemented and enhanced the experience. It was central to the second piece, ‘Aang’, which demonstrated how lighting plays a significant role in what is revealed to the audience, and what is left to their imagination.

The projections designed by Leon Trimble, alongside the lighting, and were deliberately not intrusive. This was to ensure that it did not down out the main focus of the evening: the dancers.

Lorna O’Connor, a teacher at the Royal Society of Arts, said: “The word ‘Dynamix’ is quite apt. The performance was very powerful, but with intricate softness.”

Bina, 34, said: “I think it is great, particularly combining the traditional geets, such as the Devdas soundtrack, with the upbeat modern tempo. What was great was the energy!” 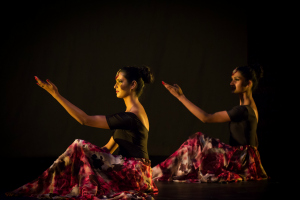 Most of the performers were young Birmingham-based youth from the 13-25 age bracket, many of whom would have been inspired to start because of witnessing events such as this.

The community feel of the event was further brought to life by the support of the many proud parents in the crowd, who make many sacrifices to support their children’s ambitions in the performing arts.

A sign of the arts community coming together to support each other, it is also particularly worthy to mention the involvement of Sampad and Chritraleka Dance Productions and Education Academy as sponsors, in addition to Arts Council England.

If grassroots arts in the British Asian community are going to survive and thrive in the future, then promotions such as this one are essential.

The next BollyDynamix event will be showing on Sunday 7th December 2014 at 5pm at the Rep Theatre. For more details, please visit the Birmingham Box website.