The Soho Road to the Punjab Exhibition in Sandwell celebrates the 50th birthday of Bhangra music. In appreciation, Hardeep Singh Sahota launches his new book, Bhangra: Mystics, Music and Migration.

"Very little academic research had been done into the area."

Bhangra, the sound of the British Asian community, is about to celebrate its 50th birthday. To honour this auspicious occasion, Punch Records present a series of events in partnership with Sandwell Council and Sandwell College.

Under Punch, the Soho Road to the Punjab (#SRTP) project has launched its latest free visual arts exhibition in Sandwell: 50 Years of Bhangra.

The highlight of the #SRTP tour to Sandwell will be a seminar led by radio and television presenter, Nihal Arthanayake, called ‘Breaking through the Entertainment Industry’. The panel will feature other media industry professionals including Radio WM presenters, Sunny and Shay Grewal.

Part of the #SRTP’s ‘Tuned On’ series, the seminars invite people to meet and converse with influential figures in the music business. It is a sign of #SRTP’s commitment to engaging with local communities at the grassroots level, particularly the youth. 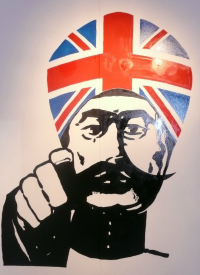 Bhangra academic and author, Hardeep Singh Sahota will also be launching his new book, Bhangra: Mystics, Music, and Migration. The comprehensively researched work covers the evolution of Bhangra, from a folk dance in Punjab to the modern musical sound that is has become today.

Sahota will also be conducting a Q&A session alongside Dr Rajinder Dudrah, who wrote the foreword to Sahota’s book. He is a senior lecturer in Film and Media studies at the University of Manchester, and is author of Bhangra: Birmingham and Beyond.

The event will take place at the Sandwell Arts Cafe on Wednesday 3rd December 2014, between 5pm and 8pm. The book signing and Q&A session will be from 5pm to 6pm, and the ‘Tuned On’ seminar from 6pm to 8pm.

Hardeep Singh Sahota is the founder of many projects which espouse his passion for Bhangra dancing. He is the creative director of Virsa, which is involved in unearthing oral histories about the culture of Bhangra.

These stories have been shared through a number of his projects, including the Heritage Lottery-funded Bhangra Renaissance Project. 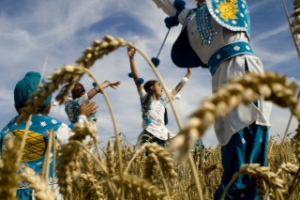 Sahota’s creation of World Bhangra Day is perhaps his most ambitious project to date. He has been particularly enthused by the resurgence of Bhangra dancing with young dance troupes and competitions:

“We get people from all cultures coming to learn the dance at the university, there’s a real shared heritage between communities through it,” he says.

Lively folk dancing has been performed in the flat and fertile plains of Punjab, since the year 300 BC. Traditionally, Bhangra dancing was the way that the farmers celebrated the harvest. It was a particularly earthy dance, connecting the farmer to his land.

“It used to be performed with a dhol-drummer in the middle and dancers moving around him with ankle bells on. They’re some of these nuances as dancers danced to a stage and an audience.”

Fast forward to the second half of the 20th century to the birth of Bhangra music in the UK. Inspired by the age-old bhangra dancing and Punjabi folk music; Bhangra transformed into sound of the British Asian community of the seventies, eighties, and nineties. 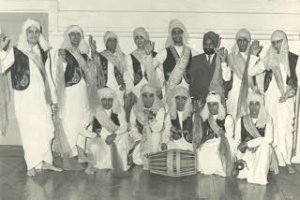 Parallel to this period, in India, Punjabi folk music also entered a golden period, with the likes of Kuldip Manak, Gurdas Maan, and later Chamkila.

Now Bhangra music has taken a new direction. With the influence of hip-hop, reggae, dub, and rock, it is on its way to becoming a multi-million pound industry.

Sahota was inspired to write the book when he realised the lack of authoritative study about the subject: “Very little academic research had been done into the area so I saw a challenge with it.”

Written as a piece of academic research, the book delves into a variety of themes in real depth. Resources used for the comprehensive research were archives at the V&A Museum, the British Library, and universities in the UK and Punjab.

Despite it’s academic appeal, Sahota’s book is designed in an array of bright and vibrant colours. The vivid illustrations and photography add context and flavour to the written word. The symbolism associated with the images is powerful. 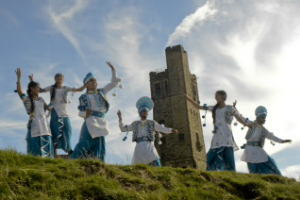 An interesting recurrent theme in the book is that the religious and secular spheres in Punjab have never been neatly separated. They have always overlapped and intertwined with each other.

Thus, Sahota believes, the practice of Sufism, Bhakti Kaal, and Sikh Gurmat Sangeet, all had a massive influence upon the musicology of modern Punjabi music.

The common consensus about the word ‘Bhangra’ is that it either refers to music or to dance. Bhangra dancing was the folk dancing done in ancient, medieval, and colonial times. Bhangra music however, was invented in Britain by Punjabi communities in the UK, inspired by, but distinct from Punjabi folk music.

The definition of ‘Bhangra’ was an area that Sahota’s research dedicated much time to. He eventually comes to the conclusion that it is appropriate to use the word ‘Bhangra’ to describe both Punjabi dance and music.

The ‘Breaking Through the Entertainment Industry’ seminar and Bhangra: Mystics, Music, and Migration book-signing will take place on Wednesday 3rd December 2014, between 5pm and 8pm.

The Soho Road to the Punjab exhibition, is currently running Monday to Friday, from 10am to 4pm until 17th December 2014. For more details of all of these events, please visit the Punch Records website.

Harvey is a Rock ‘N’ Roll Singh and sports geek who enjoys cooking and travelling. This crazy guy loves to do impressions of different accents. His motto is: “Life is precious, so embrace every moment!”
Sukki Singapora ~ Desi Burlesque Performer
Bolly Flex perform on Strictly Come Dancing