Beautifully exotic and exceptionally talented, Sukki Singapora has reached the heights of her career. In an exclusive gupshup with DESIblitz, Sukki tells us what it is like being the world’s first Desi Burlesque Dancer.

"I do incorporate elements of striptease, but it doesn't define my performances.”

Half-white British and half-Indian Singaporean, Sukki has reached the very top of her field in the world of performing arts.

Admitting that it was an unusual career choice to take, in an exclusive Gupshup with DESIblitz, Sukki tells us the decision grew out of a love for vintage fashion and dressing up: 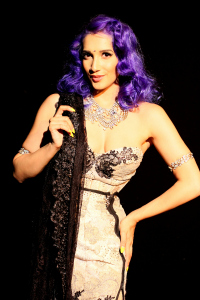 “Growing up as a mixed race child I always felt a little out of place in the two cultures. So I discovered vintage fashion as a way of expressing myself.

“And when you get into vintage fashion, you hear about the vintage advocates, the American stars and a lot of them practice burlesque, it tends to go hand in hand.”

“I was immediately drawn to it and hooked, and now as they say, the rest is history,” Sukki says.

Burlesque emerged from Italian theatre in the 17th century and then again in Victorian theatre. It essentially means to ‘poke fun of’ and was used as a form of comedy on stage. It was later adopted by American stars in the 1990s. As Sukki explains:

“It would be a light-hearted, artistic, dance performance with elements of striptease incorporated.”

Sukki says it is this neo-burlesque which has gone onto infiltrate both Asian culture and Western culture.

Stockings and corsetry are the main elements of the burlesque uniform. Tight lacing is also encouraged and refers to the cinching of the waist with a steel boned corset for ‘extreme waist reduction’.

“What I do is slightly different though. I do incorporate elements of striptease, but it doesn’t define my performances.” 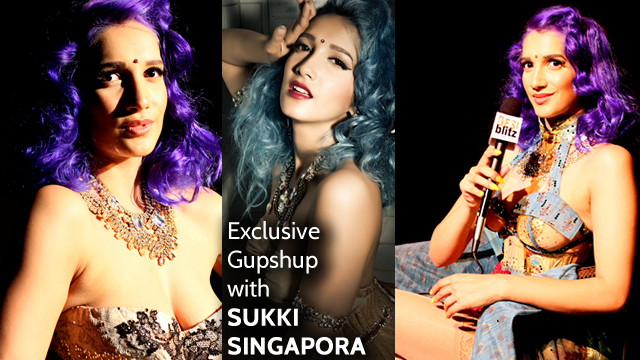 For many, burlesque is seen as a controversial art form, one that encourages sexual enjoyment and eroticism, definite taboos in many Asian societies, but as Sukki explains these are simply misconceptions of what is a very refined and complex performing art.

As Sukki explains: “The difference between the adult industry and burlesque is a hotly contested debate, but I think that really stems from the lack of knowledge around what burlesque really is. Yes there are elements of striptease.

“However the elements of striptease are not to placate any male sexual agenda. It merely is to embody what it means to be feminine and the body of the female form.”

Interestingly, Sukki also adds that the majority of her performances see a high percentage of female attendees, as opposed to males:

“Over 80 per cent in most circumstance of my audience are female. And they attend the events and they like to dress up and like to do their hair and it’s all about the aesthetics of it and feeling confident and sexy as a woman.” 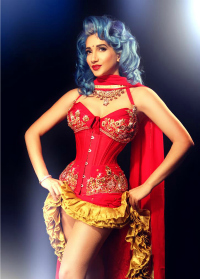 Sukki sees her profession as a celebration of the female form. Enjoying the beauty and allure of women in a way that encourages confidence rather than submissive behaviour, which is common in Asian society.

Sukki admits however that her career path has derived backlash from the community, although her family remain supportive of her decision:

“When my parents found out that I was to become a professional burlesque performer, there wasn’t a congratulations party. Of course, it has caused some controversy, but I think once you explain what burlesque is, the taboo around it very quickly dissipates.”

But being the world’s first desi burlesque performer is not without its perks. Having become widely established internationally, Sukki recalls that she was even smuggled into Lebanon and Beirut to perform at a private party.

She has also been congratulated by Queen Elizabeth after being invited for tea at Buckingham Palace. Sukki says these are great honours and cement her passion for burlesque.

Sukki is now an inspiring role model for young women and girls like her everywhere, supporting various charities and NGOs for female empowerment:

“I am choosing my career path. Now that doesn’t mean to say that I could not have chosen something else, but what I advocate is the fact that I did have that choice, and I chose to do a very complex and difficult art form of which I take pride in.

“It is difficult as an Asian woman to choose the arts, to flourish in the arts and to express yourself to the extent you want to express yourself. So I hope that by working really hard at it, I can become an inspiration, and inspire a generation of young Asian women, and young women across the world to just be free to express themselves.”

Sukki defines what it means to live against cultural norms. But at the same time she is proud of both her choices and her heritage. Even her outfits are custom made to indulge her cultural background:

“Every single outfit I wear, there is an element of a sari woven into it. I try to wear my heritage in my performances, literally wear my heart on my sleeve. So I guess I’m unique in that respect perhaps.”

Quirky and gifted, Sukki Singapora represents a new breed of British Asian in society, one that we are keen to see much more of.

Aisha is an editor and a creative writer. Her passions include music, theatre, art and reading. Her motto is “Life is too short, so eat dessert first!”
Jaz Dhami’s Pasina features Sneakbo and Ikka
Book Launch celebrates 50 Years of Bhangra