Actress Sunetra Sarker is set to star in BBC’s Strictly Come Dancing along with her dancing partner Brendan Cole. The actress has been a popular face on British Television with her roles in Casualty and No Angels.

“I definitely know I have two left feet at the moment!”

It was revealed on the Launch Show on 7th September, 2014 that Sunetra is set to partner up with professional dancer, Brendan Cole.

The Casualty actress said that she was “delighted” about the pairing, saying: “He’s been a great teacher already!”

Sunetra came to fame as an actress after starring in Brookside, which she thinks was her “lucky break.” She has since starred in a variety of shows such as Dr Who, No Angels, The Chase and Cold Feet.

Sunetra is 41 years old, originally from Liverpool, and studied at Brunel University. Speaking on the show, Sunetra said: 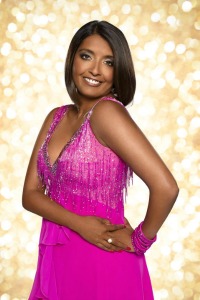 “I would never have believed I’d have ended up here, not on the strictly dance floor! I don’t think the audience understand how nervous we are.”

The actress also revealed that she wouldn’t have considered taking part in Strictly if it had not been for her son’s enthusiasm:

It is perhaps in Sunetra’s blood to be a dancer, as her mother was an Indian dancer: “She would roper me into every dance production she ever did.”

Although she has jokingly admitted: “I definitely know I have two left feet at the moment!”

Sunetra is one of the few contestants on the show to have been Indian. Whilst several Asian or Indian contestants have competed, none have got very far or made the final. So will Sunetra fare any better?

She follows in the footsteps of previous British Asian contestant, Jimi Mistry, (from Season 8) who made it to Week 6 of the dancing competition. Jimi is also an actor, and has starred in projects such as East is East and Eastenders.

Another contestant of ethnic descent was Indian Actress Laila Rouass, who featured in Season 7 and made it to the Last 4. She was also an actress that starred in Holby City and Footballers Wives. 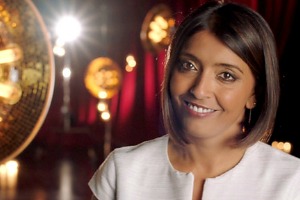 Whilst Laila was on the show, there we accusations that racist comments were made towards her, and was even called a ‘Pa**’.

The BBC received 281 complaints over the issue, yet Anton Du Beke vehemently denies ever using racist language towards her and insisted that things had been taken completely out of context.

It is hoped that Sunetra will do fairly well on the show, as she has already shown her highly competitive streak in competitions such as Celebrity Masterchef and Pointless Celebrities.

The first episode of Strictly was reasonably well received, despite some tabloids and media publications such as The Mirror calling the cast, ‘its weakest ever celebrity line-up’.

Strictly was still able to pull in the weekend’s best Sunday TV ratings, ahead of Simon Cowell’s The X Factor. It took around 200,000 viewers more than their rivals peaking at 9.4 million viewers.

Simon took to twitter to congratulate Strictly saying it was ‘Round one’ to the dancing show.

The show returns on Friday 26th and Saturday 27th 2014, for the first round of live shows. Only time will tell how Sunetra and her dance abilities will fare.

Rachael is a Classical Civilisation graduate who loves to write, travel and enjoy the arts. She aspires to experience as many different cultures as she can. Her motto is: “Worry is a misuse of imagination.”
The Cultural Fun of Mehndi Dancing
RDB split causes Brothers to fight in Court