The Cultural Fun of Mehndi Dancing

Dancing at a mehndi has now become just as much of a tradition as the rituals are. The art of dance has always been a way to express yourself in a creative way, and Bollywood has shown us that it’s okay to dance your heart out to your favourite songs.

It's common for the boy’s side at a wedding to create a fun medley of songs.

Mehndi dances have infiltrated the desi wedding scene since the ancient times of Lord Krishna.

With Bollywood at its peak, it is no surprise people want to dance to the catchy tunes from the most popular films, but where did the phenomenon start?

The popular folk dance of Dandiya is a cultural tradition, whereby you use large sticks to choreograph a routine, which represented the swords of the Goddess Durga in Hinduism.

First gaining interest in the 1930’s in South Asia, a mixture of belly dance, Garba/Dandiya, and Arabic influences saw the boom of the Bollywood dance. 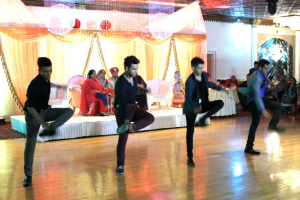 The progression of Mehndi dances over the years has been heavily influenced by the popularity of the Bollywood scene and the introduction of western dance such as Hip-Hop.

Actresses such as Hema Malini and Rekha coined the Bollywood dance scene by being some of the first actresses to take on choreographed dances in their films. It was these classical dances which influenced the beginning of women using their body to show emotions through dance.

Now, watching icons such as Deepika Padukone sway around in her multicoloured choli, dancing in unison with a troupe of others makes you want to give it a go yourself. With more freedom on the style of dances you can do, Mehndi dances can be fun to choreograph.

Big award shows such as the IIFA’s (International Indian Film Academy awards) have also emphasised the culture of Bollywood dance by having a string of famous actors and actresses perform songs live from their movies. 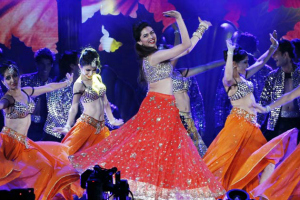 The first IIFA awards started in 2000 at the Millennium Dome in London and really showed the success of the Bollywood industry and the influence it had all around the world.

However, it was not until IIFA 2003, where superstar Salman Khan wooed the audience with a performance of ‘O O Jaane Jaana’ from the well received film, Pyaar Kiya To Darna Kya (1998).

This started a long stretch of entertaining choreography from stars and made live performing a new phenomena.

Now with a Mehndi being seen as much more than the rituals and ‘rasams’, it is expected of younger unmarried girls (and boys!) to dance for entertainment, and most of the time it is the most enjoyable part of the Mehndi! But, the process of choosing Mehndi songs to dance to is never easy!

The first port of call is the Bollywood charts, or that new Indian film with the heroine doing bhangra at a wedding. The pace, the lyrical meaning, the audience it is being performed too, and the arrangements of the dance are all important factors when considering Mehndi songs.

The film industry are aware of the mehndi dancing craze so they now provide songs related to the occasion with easy-to-copy dance routines, which we all know will be a hit.

The most popular songs include:

It’s no secret that some men also love to dance, and it’s common for the boy’s side at a wedding to create a fun medley of songs and entertain guests with their playboy like ways.

Comical songs such as ‘Bachna Ae Haseeno’, ‘Angrezi Beat’, ‘Lak 28 Kudi Da’ are favourites for men to provide the room with a giggle. Other songs include the likes of ‘Hookah Bar’ (Khiladi 786, 2012) and ‘Desi Boyz’ (Desi Boyz, 2012). Bollywood heroes, Salman, Shahrukh and Hrithik have paved the way of choreographed dance for men, with current hot actors such as Shahid Kapoor, Ranbir Kapoor and Ranveer Singh now taking the dancing reign. 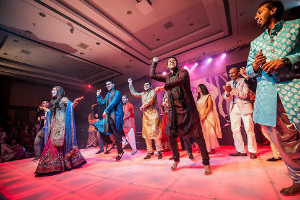 Mehndi dances have evolved over the decades and become a way for men and women to express themselves through the creative means of dance and to have a bit of fun.

Although the art of dance has evolved much more from the classical sort you’d see in the films your grandparents used to love, it is a form of dance more people are trying to learn.

Classical dancing shows elegance, good timing and steady posture which doesn’t come easily to everyone, but the desire to try and become Madhuri Dixit in ‘Maar Dala’ is tempting.

The phenomena of Mehndi dances will not fade as long as Asian weddings become more extravagant. Professional dance groups are sometimes hired for entertainment, and the need to have something fun to watch on the Mehndi is becoming an important aspect.

DESIblitz predicts that YouTube will continue to be inundated with Mehndi dancing videos and remixes for years to come and the mixture of East meets West will make routines much more creative.

Huma is a Media student with a passion for writing anything fashion, beauty and lifestyle related. Being a bookworm, her motto in life is: "If you only read what everyone else is reading, you can only think what everyone else is thinking."
Celina Jaitley to sing on Broadway with Sting
Sunetra Sarker competes in Strictly Come Dancing