Are You Ready for a New, Punk Rock Inspired Daler Mehndi?

In an exclusive Gupshup with DESIblitz, Daler Mehndi talks about receiving the ‘Rumi Award for Oneness’ and his upcoming music projects.

Wearing his quintessential, jewelled turban, sending his energetic ‘tunak tunak‘ vibes our way, Punjabi pop icon and Sufi music enthusiast Daler Mehndi is not a regular fixture on our screens anymore. However, that hasn’t made him any less of an achiever.

After uplifting our spirits with his powerful vocals for Dangal’s title track and singing for Baahubali 2 in four different regional languages, Daler Mehndi was recently awarded the ‘Rumi Award for Oneness’ by filmmaker and culture aficionado, Muzaffar Ali.

The festival was dedicated to Hazrat Baba Fariduddin Ganjshakar the patron Saint of the Punjab and the Pir of Hazrat Nizamuddin Auliya. 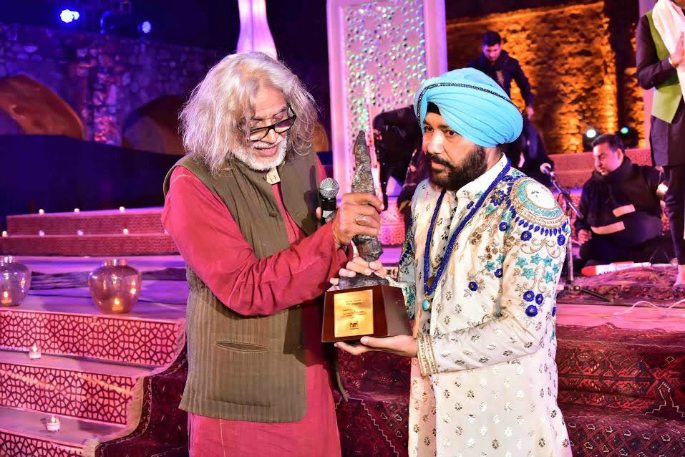 DESIblitz talks to the singer, who gave a power-packed performance at the finale event of this festival, on receiving the award, about his thoughts on emerging Punjabi artists and what fans can expect from him next:

“The Rumi Foundation is being run by a good, credible team and for years they have been committed to celebrating and promoting Sufi music,” Daler Mehndi shares about the event and its organisers.

“A Sufi music festival has never been organised at this level and I am glad that I got the opportunity to sing pure Sufi music, that is, in Baba Sheikh Farid’s words. Because Baba Sheikh Farid sang for one God and not in praise of human beings. I am also happy to have received this award from Muzaffar Ali.”

Listen to our full Gupshup with Daler Mehndi here:

It won’t be wrong to argue that the real essence of Sufi music has lost in a slew of  spiritual, romantic numbers. And Daler Mehndi is also quick point out that such songs don’t necessarily qualify as Sufi music:

“No one can match up to what the likes of Sabri Brothers and Nusrat Fateh Ali Khan Sahab have sung. They were outstanding,” Mehndi says.

Moving on from his love for Sufi music, it seems Daler Mehndi is all set for a new avatar.

The Punjabi powerhouse has delved into everything from pop to Sufi music and is now ready to experiment with punk rock.

He tells DESIblitz that fans will soon get to see a new Daler Mehndi with a mix of Punjabi and 70s inspired punk rock music. We can’t wait to hear it!