Shruti Haasan has been in a relationship with Santanu Hazarika for a while. The actress has now posted a lovely photo with him.

"I think there’s a pattern here."

A picture of Shruti Haasan and her boyfriend Santanu Hazarika is doing the rounds on social media.

The Singham 3 actor, on January 23, 2023, shared an adorable picture with her beau Santanu Hazarika and the caption caught the attention of fans.

Shruti Haasan took to her Instagram Story and shared a monochrome photo posing with Santanu Hazarika, flaunting a huge smile.

She captioned the picture: “You make me (laugh emoticons) like nobody else in this world.”

In the picture, Shruti is seen wearing a black dress and is looking at Santanu with a huge smile on her face.

The two seem to be completely lost in each other’s smiles.

A few days ago, the actor also posted a series of random pictures and video dumps.

The pictures revealed some intimate moments from her daily life and featured Santanu, the couple’s pet cat Clara, paintings, and selfies.

Shruti then posted her childhood, teenage and current pictures of herself and reminisced about her musical journey. 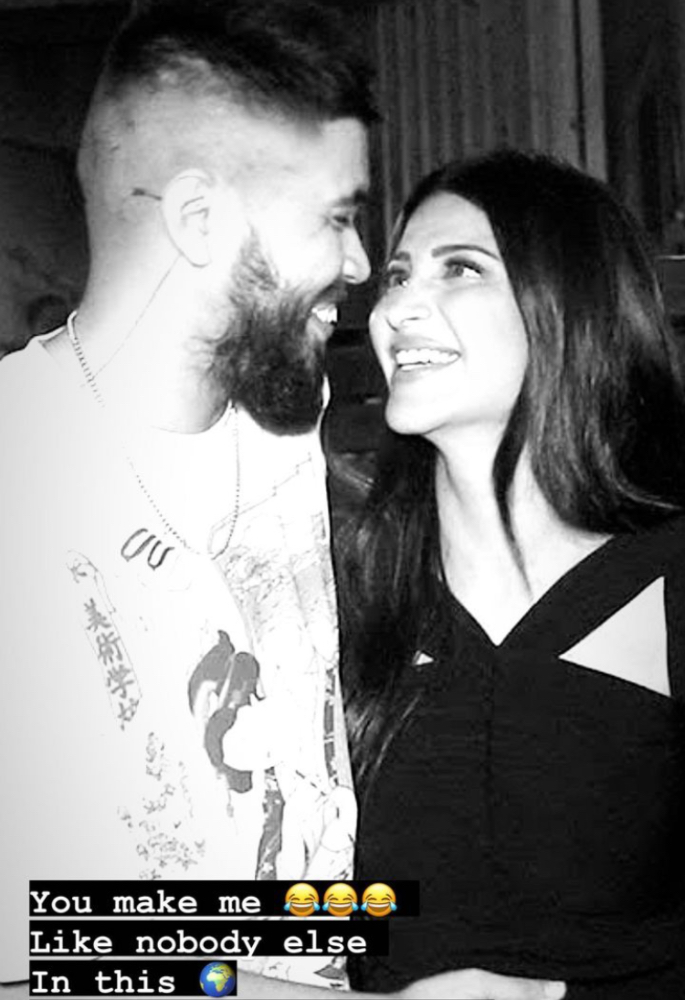 She captioned it: “I think there’s a pattern here. We always return to who we are inside – in my case, it’s a shadow monster with a 90s heart.”

An Instagram user tried to troll Shruti for the way the shape of her nose transitioned over the years.

To this, she simply replied with a gold medal emoji and wrote: “Here you go! Have a good day.”

Meanwhile, a week ago, Shruti Haasan took to her social media handles and reacted to the reports of her not attending the pre-release event of Waltair Veerayya due to ‘mental problems’.

The actor shared several screenshots of media reports that claimed she has mental problems and is undergoing treatment.

She slammed the baseless reports on Twitter and wrote:

“Nice try!! And Thank you I’m recovering well from my viral fever.”

Veera Simha Reddy and Waltair Veerayya clashed at the box office as they were released on Sankranthi.

She will be seen next alongside Prabhas in Prashanth Neel’s forthcoming action flick, Salaar.

The film is produced by Vijay Kiragandur under the banner of Hombale Films.

The film will also have Jagapathi Babu, Madhu Guruswamy, and Easwari Rao in key roles.

Aarthi is an International Development student and journalist. She likes to write, read books, watch movies, travel, and click pictures. Her motto is, “Be the change you wish to see in the world
Sukesh Chandrashekhar hits out at Nora Fatehi’s Claims
RRR’s ‘Naatu Naatu’ receives Oscars Nomination