Shahrukh Khan has revealed his new eight pack for his upcoming film, Happy New Year. DESIblitz takes a look at the photos, and finds out why so many Bollywood stars are bulking up.

Having a 6 pack isn't enough to wow audiences any more.

Shahrukh Khan has revealed his incredible new 8 pack as part of his promotional material for Happy New Year.

The Bollywood superstar shared a picture of his chiselled figure on Twitter, and wowed fans with his muscled appearance.

The 48 year old has clearly undergone rigorous training, and appears in the picture standing topless and showing off his new set of chest muscles.

The picture was snapped by renowned celebrity photographer, Dabboo Ratnani with a little help from Avinash Gowariker. 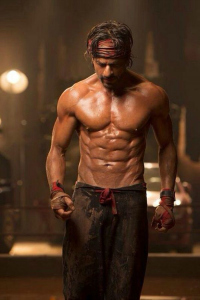 SRK tweeted out his thanks to the talented Ratnani and Gowariker, and also jokingly referred to his friend and HNY director, Farah Khan: “Thanx my friend. Now Farah don’t exploit me any more!!!”

The last time SRK showed off his abs was for the 2007 film, Om Shanti Om, where he trained to achieve a 6 pack. This was also the last time that he was seen on screen with his top off for the song, ‘Dard-e-Disco’.

It is clear that Shahrukh is keen to show us how hard he has been working in the run up of his new film, and has outdone himself by achieving an 8 pack.

The force behind this new look is Bollywood’s most sought after trainer, Prashant Sawant.

With the new muscly figure, hype for Happy New Year, is at an all time high. The film also stars Sonu Sood, Abhishek Bachchan, Deepika Padukone, Boman Irani and Vivaan Shah, and will release in October 2014.

Fans will also have the chance to see the Badshah’s abs up close and personal during his US tour, where him and the HNY gang will travel to in Houston, New Jersey, Washington DC, Chicago, Vancouver and California. 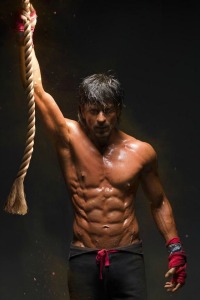 But what has brought on SRK’s incredible 8 pack look, as surely, as surely a 6 pack alone would be impressive enough?

The answer seems to stem from the fact that recently in Bollywood it has become popular for stars to bulk up hugely. It would appear that having a 6 pack isn’t enough to wow audiences any more.

Aamir Khan, for example, displayed large bulging muscles in his performance in Dhoom 3, and has now also appeared nude in all his muscular glory on the poster of his new film, P.K.

Salman Khan has regularly appeared in his action films looking bulked up, and is rumoured to have a punishing fitness regime to keep in such good shape.

The effect of so many muscled men vying for press attention has now led to stars frequently trying to out-do each other’s physical appearances. Being in the media spotlight has affected their fitness regimes and emphasised the need to visit the gym.

Shahrukh has now met this demand appearing with the incredibly coveted and unusual 8 pack, despite being 48 years old.

Having more packs than anyone else surely helps to give him an edge! The exposed abs will form SRK’s introductory scene to HNY and looking at the pictures, it could very well be one of the sexiest entrances King Khan has ever made!

Will his new physique help his new film to have a greater success? It would seem so, as many Bollywood fans will be more likely to give the film a watch to glimpse these new features!

What do you think of Shahrukh’s new look? Does he officially get the ‘the best pack of Bollywood’ award?

Rachael is a Classical Civilisation graduate who loves to write, travel and enjoy the arts. She aspires to experience as many different cultures as she can. Her motto is: “Worry is a misuse of imagination.”
Mary Kom ~ Review
Jon Hamm searches for Million Dollar Arm