Jon Hamm, the famous Mad Men star, speaks to DESIblitz about his latest movie, Million Dollar Arm. We find out about the film’s inspiration, and Hamm’s experience in India.

“Mumbai is an eye opener in every way and so radically different to life in the States.”

Best known for playing the legendary character Don Draper in the award winning hit American TV series, Mad Men, Hamm parts with his TV role for the silver screen as the lead in this real life fairy tale.

Hamm plays the role of sports agent JB Bernstein, who turned to India in 2007, in a last ditch attempt to discover a fast bowling gem that he could take back to America and turn into a Baseball pitcher.

By way of open auditions, akin to the English reality TV show, Britain’s got Talent, candidates in India were invited to pitch a baseball for the ‘chance of a lifetime’; to move to the USA and live the American dream by becoming a professional baseball player. 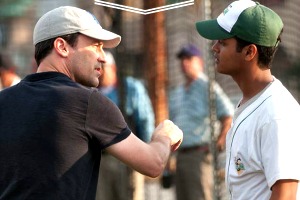 As someone that enjoys the sport of baseball, the St Louis Cardinals fan humbly admits that he was previously unaware of the true story that inspired the movie.

In an exclusive Gupshup with DESIblitz, Hamm says: “I found it appealing that it was a true story, and I found the story really kind of mind-blowing.

“The fact that these two boys were sort of picked out of very small towns in India and were able to, through their incredible dedication and hard work, were able to achieve this monumental ability.

“I’ve pitched baseball my whole life, and I can’t pitch the ways these guys pitch. So it’s a testament to their hard work. It’s an incredibly inspirational story.”

Hamm also mentions that he had never even visited India, let alone filmed there, prior to this project. 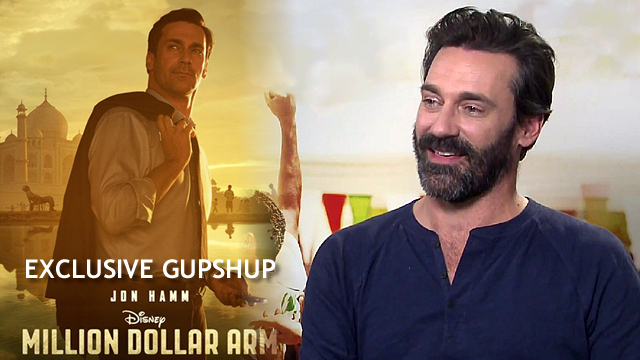 One such fascinating aspect that Jon fondly recalled was the ‘lunch system’, better known as the world famous ‘Mumbai Tiffin Service’ (Dabbawala), which he found truly amazing, and adds that he spent a lot of time researching online all the cultural quirks he came across during each day.

On his newfound fascination for India, Hamm also befriended the talented Bollywood star Ranbir Kapoor whilst watching him shoot a movie.

Hamm had found Kapoor to be ‘incredibly impressive’, and used the opportunity with DESIblitz to pass on a visual greeting to his new Bollywood buddy. 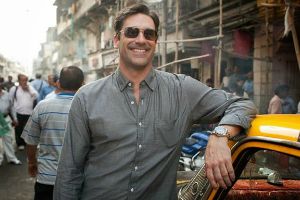 As a youngster, Hamm wasn’t overly interested in acting, even though he had been doing it as a hobby from a young age. His first real role was at the age of 5, when he played Winnie the Pooh.

He only realised acting could be a serious career during his twenties, when he landed a part in A Midsummer’s Night Dream.

He went on from there and put everything into his acting, even setting himself a ‘make or break’ target of the age of 30 by when he ought to ‘make it’, which he duly did.

Interestingly Hamm was the producer’s first choice to play the character of the real life sports agent, JB Bernstein in Million Dollar Arm.

Fellow actors, Suraj Sharma (Life of Pi) and Madhur Mittal (Slumdog Millionaire) who play the two boys Rinku and Dinesh, also had to learn to play ‘movie Baseball’ in order to make the role their own not too dissimilar from the Indian competition winners.

Hamm tells us that Million Dollar Arm is an inspirational story that is sure to capture the imagination of people of all ages. 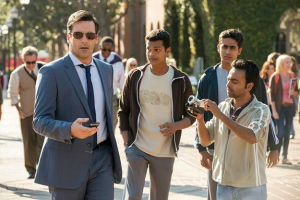 While baseball may be the basis for the movie, this is far from a sports orientated film. The main focus of the story is about relationships, the value of family, spirituality and morals.

It is the kind of film that will leave people to think about how they should act and what life is really about. It provides proof that passion, endeavour and sheer belief can help to anyone to achieve their dreams, and that almost anything is possible.

Jon adds that JB Bernstein is still continuing the programme, seven years after it started. As a result, Major League Baseball is continuing to grow in popularity in India, and we could be seeing more Indian players crossover into baseball in the future:

“There’s phenomenal athletes all around the world. Certainly American people don’t have any patent on being baseball players. We’ve got people in the Major Leagues from Central America and South America, and Korea, Australia.

“It is becoming a global game, so ideally in our lifetime we will see an Indian born play in the Major Leagues as well.”

Hamm hopes his fans enjoy the movie and more importantly, seek inspiration from it, similarly to the boys who won the audition in real life. Million Dollar Arm released from August 29th, 2014.

Rupen has been passionate about writing since childhood. Tanzanian born, Rupen grew up in London and also lived and studied in exotic India and vibrant Liverpool. His motto is: “Think positive and the rest will follow.”
Shahrukh Khan reveals new 8 Pack
Shahrukh Khan’s Amazing Looks in HNY