With the Happy New Year trailer and songs trending on social networking sites, what grabs our eyes the most is the variety of appearances Shahrukh Khan sports in the film! DESIBlitz has all the trendy details.

The sexy beard makes SRK look lava hot and tough to the core.

Shahrukh Khan is known to do something different and unique in all his films.

For diehard fans who watch his every move, SRK manages to start a new style trend every time.

Happy New Year is no different. The 3 minute trailer itself flaunts SRK sporting various looks that makes one wonder how many looks in total will SRK have in the film. 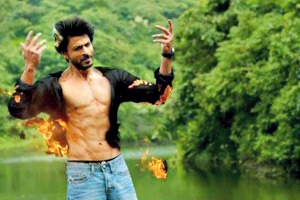 SRK more or less started the 6 pack abs trend in Bollywood which went to become a statement and then a need for an actor to survive in Bollywood.

The last time SRK flaunted his amazing 6 pack abs to his fans was in his film Om Shanti Om (2007).

This time, he has made sure to beat his own record by showing off not 6 but 8 pack abs for his upcoming film Happy New Year.

Apparently the new hunky build will be for his entry scene and a song, making it the one of the most talked about on-screen entries of SRK.

He looks so hot in his transformed body that even the actors younger will be embarrassed. 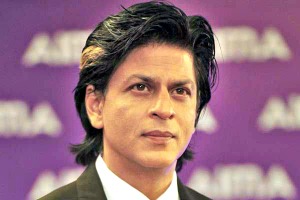 SRK is the King Khan of Bollywood and there are absolutely no two ways about this!

Did you happen to notice the fabulous golden hair streak that SRK is flaunting in the Happy New Year trailer? Does it not look like a secret crown that King Khan is hiding from all of us?

Right in the opening scene of the HNY trailer, SRK walking in a striped grey suit looks absolutely dapper and one cannot help but notice his shining golden streaks.

It’s a fact that whatever SRK wears, becomes the trend. In Don 2 (2011), the actor sported a pony tail and immediately many actors copied him. Let’s see if this golden-haired streak makes others insecure about their own hair-dos.

3. The Sporting a Stubble Look 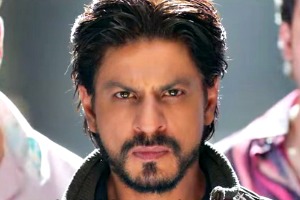 One has seen SRK sporting stubble and looking absolutely sexy in Chak De India (2007) and a little more stubble than that in Jab Tak Hai Jaan (2012). Girl fans had totally loved it.

This time, it’s a tad bit more than stubble, yes a beard and Shahrukh Khan looks smoking hot and manly sporting it.

The sexy beard makes SRK look lava hot and tough to the core. This scruffy bearded look is definitely going to makes his female fans go weak in knees. 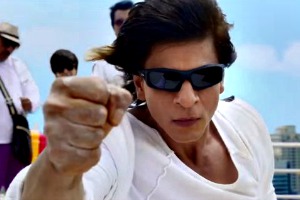 SRK in a clean shaven look is a necessity in his films. How else will he flaunt his dimples to his fans?

SRK knows his strengths and always makes sure that he is sporting a chocolate boy look by going with a total fresh shaven look.

This time he is also wearing very stylish black and blue aviators and the way he looks in them, they are surely going to sell in the market like hot cakes. 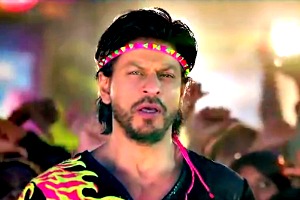 Now you had seen SRK in a dancer mode in his film, Rab ne bana di Jodi (2008) in which he wore flashy track pants and trendy clothes.

This time SRK surpasses than and has gone over the top with his dancer look. He is seen wearing a hat, head band, loud coloured jackets and aviators.

It’s assumed that all these flashy, flamboyant, shiny outfits are worn by SRK when he is participation in the World Dancing Competition sequences and songs.

SRK really has gone over the top this time with colours and his overall style! You better carry a pair of sunglasses in the cinema just in case it’s too bright for your eyes.

6. The Blond and Blue Eyed Look 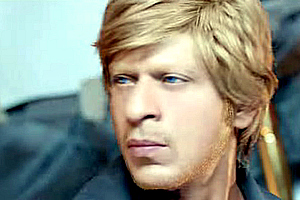 If you thought SRK looked weird and hot at the same time in his blue lenses in Ra.One this look would shock you make you wonder: WHY?!!

SRK is seen disguised as somebody and he is wearing a blonde wig and blue coloured contact lenses. He still handles looking effortlessly sexy well enough (or not)!

With so many looks designed for SRK, there are too many trends that are about to start with the release of HNY. Since DESIBlitz has already told you about them, choose your favorite and be quick before it gets too old.

Komal is a cinéaste, who believes she was born to love films. Apart from working as assistant Director in Bollywood, she finds herself doing photography or watching Simpsons. “All I have in life is my imagination and I love it that way!”
Jon Hamm searches for Million Dollar Arm
Deepika Padukone stars in quirky Finding Fanny