Sex Before Marriage Still a Taboo for Young British Asians?

Is sex before marriage still a taboo amongst young British Asians? We spoke to some to get their views on pre-marital sex.

"So we’re still doing it, but we won’t talk about it."

Have views on sex before marriage amongst British Asians changed? Or are we still grappling with the matter being a taboo even amongst young British Asians?

Early generations of British Asians were brought up on a staple diet of strict extended families, controlling parents and views on sex which came from the homelands  – a subject not discussed openly at all.

However, those born in the UK also witnessed another lifestyle outside not seen at home.  Where dating, kissing, snogging and having sex was all part of British culture – creating a well-known divide in views on sex outside marriage.

Those not willing to follow what the ‘Romans did in Rome’ and sticking to their traditional South Asian roots and ways were on one side, and others participating in British life including sexual relationships but not being open about them, were on the other side.

DESIblitz explores further and asked young British Asians if they think sex before marriage is still a taboo.

Reactions to the Question

Unsurprisingly, a significant number of young British Asians remain closed off on the topic of sex before marriage.

On asking the question, a majority of the interviewees were taken aback and took a couple of seconds to process their thoughts.

Though some were sexually active, they were reluctant to share. As one student said:

“In the UK a lot of Asians try to adjust to British culture, so a lot of them will have the right blend of westernised culture and Asian culture. They keep it on the down low but are fully exposed to it.”

Another young Brit-Asian student agrees, adding that the stigma of sex before marriage stems from traditional and cultural values.

“The older generation see it as a taboo. It’s kept shut among many families which can cause problems.”

The aspect of secrecy is common amid young Asians, as Sara points out:

“We want to respect our parents’ rules by leading another life and pretending to be what they want us to be.

“So we’re still doing it, but we won’t talk about it.”

British Punjabi graduate Davina echoes this belief, stating that the older generation “pretend we’re not doing it, and we do too.”

Akshay reiterates the ‘ignorance is bliss’ principle, as he tells us:

“My mum is in denial about it, though she’s aware.”

Shelley* addresses the elephant in the room, boldly stating:

Regardless, Davina is one of few British Asians who has spoken to her mother about her sex life.

“She acknowledges that it’s uncomfortable to talk about but says she’d rather know everything.”

Sukh* highlights a deeper rooted issue, shrewdly pointing out that sex is just one of many issues which remains stigmatised within British Asian communities, saying:

“South Asian culture is quite secretive anyway. People try to keep things within themselves because they don’t want their pride to be tarnished…

“…Most issues or any other kind of ‘shameful’ things are kept on the down low anyway.”

Mental health, homosexuality, and inter-racial relationships are just a few of the topics to fall into the same category.

As Davina remarks, the subject of sex before marriage is further highlighted when inter-racial relations come into play.

“Sleeping with someone who isn’t from your background is far more taboo.”

“Whereas at least with premarital sex with someone of the same background, there’s at least some hope that it could turn into something more.”

“Yes it’s still a taboo, but it’s a taboo everywhere, not just in Asian communities.”

According to cultural anthropologist Ernest Becker, sex is problematic because it reminds humans of their animalistic nature.

Humans immerse themselves in cultural and religious practices and beliefs, so physical behaviours such as sex pose a threat to our existence as spiritual beings.

This view is mirrored by Megan, a White British graduate who says:

“It’s not something I can talk about to my parents at all.”

“We come from a religious Christian family, so sex before marriage is forbidden.”

Nick, a British business owner has another perspective:

“However, my parents didn’t talk about it. Especially at 13-15 my parents weren’t open about it. I think that makes you more curious.

“My parents didn’t tell me about birds and the bees. My grandma told me more and gave me sex ed books.

“But now, if there is any problem I can talk to my parents about it. My mum would be awkward about it, but dad would be okay.”

Indicating that it’s still not very easy to talk about sex with parents irrespective of your background.

For a Girl, it’s Different?

Gender roles continue to present challenges in reference to pre-marital sex. Whilst many British Asian men are sexually active, some sheepishly remarked, “for a girl, it’s different.”

‘A key that can open many locks is called a master key, but a lock that can be opened by many keys is a bad lock.’

Of course, this analogy has been subject to criticism by men and women alike.

Chris* offers his view: “When men sleep around he’s a player, when women sleep around she’s a slut. It’s just a double standard in every culture, no matter what colour you are.

“The fact that human beings are being reduced to objects is ridiculous. Your sexual history doesn’t make you any better or worse of a person.”

Davina reveals her experiences, describing how after breaking up with her boyfriend she felt she was “damaged goods.”

“It’s ingrained deep down that sex is just wrong. So you feel bad for doing it.”

Attiq,* a British Pakistani student, was one of many who voiced his preferences of only dating a virgin:

“For me virginity is important. I’m a virgin myself so I want us to be on the same page. I don’t think it’s any better or worse for a man or a woman, it’s just my preference.”

Others, such as Karan* had contrasting attitudes, declaring that they could only marry a virgin. When asked if he was sexually active, he tentatively remarked: “Yeah…but don’t include that in the video.”

Other British Asian men were much more open to the idea of dating or marrying a sexually active woman.

Raj* says: “In the modern day, opinions have changed. People look past that. It shouldn’t be as big of a deal as it was before.

“Now, everyone has a sexual past, it’s just how things are.

“When guys do it, it doesn’t matter but when girls do it all of a sudden, it’s a big deal.”

“What they’ve done in the past shouldn’t affect what you two are going through at the time. She can’t judge you for your past and you don’t judge her for hers.”

Naeem* agrees: “It’s natural instinct so I wouldn’t be fussed.”

Harpreet also shares his views: “If anything, I would prefer if she was sexually active as she’d be more experienced, so makes it more comfortable for you.”

However, he also speaks of there being a ‘limit’ as to how many sexual partners she has had.

“There has to be a limit…a couple of times is okay.”

He hesitates when asked about the sexual history of men vs women.

“Sleeping around for a guy is a bit different…no, it’s kind of the same, it’s equal, it’s bad for both.”

Some points to consider when conducting the research was that no one used the word sex, instead just referred to it as ‘it.’

On being asked a question about pre-marital sex or personal experiences, almost all interviewees pondered on the subject, retracted some details or asked us to cut parts of the interview out whilst filming and wanted time to articulate their thoughts.

Watch the video of our DESI Chats with some of the young British Asians we spoke to: 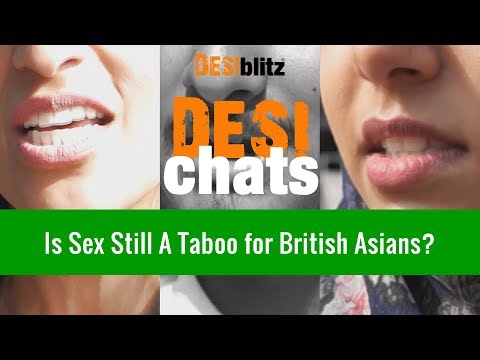 As expected, many more men than women spoke to us, with only one female agreeing.

The body language and choice of vocabulary alone was enough to answer ‘yes’ to the question at hand.

It appears that young British Asians still view sex before marriage as a taboo, but mostly because of their parents’ or grandparents’ views rather than their own.

The desire to respect elders is strong, so much so that many British Asians are still leading double lives – one for their family and one for themselves.