Real Stories: Being a Gay South Asian in Britain

Despite acceptance in the West, the gay South Asian community still faces considerable challenges in Britain. DESIblitz has an intimate discussion with LGBT Asians about their personal experiences.

"I tried my best to feel attracted to men. I tried hard. It didn’t work”

To date, two dozen countries have granted the legalisation of same-sex marriage.

For decades, activists have been striving for equal rights of the LGBT community across the world. Yet, the topic of sexuality still evokes great discomfort amongst the South Asian community.

While many celebrate newfound equality, not everyone is in agreement with this – including Asians.

Despite the multitude of religious faiths across South Asia, the view on homosexuality remains fairly constant.

The infamous Section 377 of the Indian Penal Code, criminalising ‘sexual acts against the law of nature’ appears to be consistent with Indian culture and tradition.

Interestingly, the section was decriminalised in July 2009 by the High Court of Delhi, only to be reinstated once again in 2013.

Section 377 was a Victorian Era Law from 1861 which was introduced during the British rule of India. Whilst Britain now revels in the freedom of a state with sexual privileges, India still basks in traditional British values.

Religious, cultural and social norms are difficult for many to stray away from. Worldwide acceptance does not necessarily mean that those with strong views will automatically be in favour of the gay lifestyle.

In fact, a significant number of non-Asians are vehemently against the gay movement, meaning the issue is not exclusively a South Asian one.

One of the most renowned gay hate groups in the world is an American religious organisation – The Westboro Baptist Church.

“It’s not about not wanting to accept it. It just isn’t allowed. There’s always a reason for forbidding it. It’s unnatural. Two men or two women can’t procreate. If homosexuals were meant to be we wouldn’t continue as a human race.”

For this reason, it is highly likely that a considerable chunk of the South Asian diaspora may never accept homosexuality.

An American netizen, Farhan* says: “Being against something doesn’t make you homophobic…I’m not down with it, but I’m not going to treat a person differently because he participates in that lifestyle.”

Farhan’s opinions are often shared by many. This mentality confirms that disapproval does not necessarily equate to bigotry. 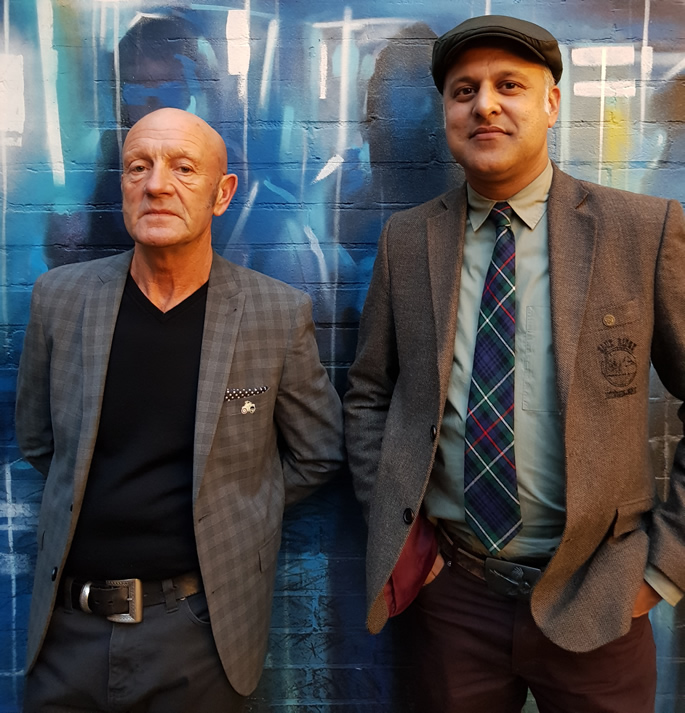 Efforts to bridge the gap between tradition and sexuality are well underway. Birmingham has seen an influx of LGBT support groups, catered specifically towards South Asians:

“I was facing many difficulties. After I lost my parents, I was made by my brother to choose between my partner and my family. I knew others must be feeling the same. So, I decided to seek help from a group,” says Khakan Qureshi, founder of Finding A Voice.

“A Bournemouth student planted the seed for me. In an interview with her she told me, ‘You’re inspiring. Why don’t you help others?’”

With his father being a well-known religious leader, faith played a significant role in Khakan’s upbringing. Whilst his mother told her son, ‘What makes you happy makes me happy,’ his father took a colder approach.

Initially, Khakan was accustomed to hearing homophobic slurs from his father and brothers, the distress of which led to him leaving the family home. It wasn’t long before his father called him, pleading with him to return as his mother was “heartbroken.”

On his arrival, the father and son duo shared a warm embrace, with his father selflessly telling him: “We will come to terms with it.”

Often criticised for his sexuality and religious background, Khakan states that there are many ways to stay close to his faith:

“Religion is about being as good as a person as you can. Giving to charity, being compassionate, helping vulnerable people,” all of which, Khakan is active in.

Like his father, he also demonstrates enthusiasm in his daily work. Whilst his father was passionate to coincide Asian and British values, Khakan aims to combine LGBT Asians with the wider LGBT community.

Despite the bumps along the way, Khakan has now spent 25 years with his White, male Christian partner.

As of 2016, Finding A Voice has also been made open to LGBTs of all ethnicities rather than just Asians: “There’s a factor of relatability with other races. We have the same struggle, but different nuances. There’s an overall arch of coming together.”

Similar support groups have also impacted others, including women like Asifa*:

“The worst thing about being a Pakistani lesbian is living two lives; one for my family and one for myself. My family will never accept me as a lesbian. They would rather kill me than accept me. But finding LGBT groups where I can talk openly has motivated me so much and has helped drag me back into life.”

“Why do people get hate for loving someone? Loving is so easy. Hating is hard.”

Khakan is not the only gay Asian to have received backlash for his apparent clash of sexuality and religious views. Serina*, a Pakistani lesbian from London opens up to DESIblitz, sharing her harrowing experiences with homophobia:

“When my parents found out I was a lesbian… they kicked me out of the house, took my phone from me, forbid me from talking to my sisters, and there I was in my pyjamas, outside, in the cold. I was in my most vulnerable state, hoping to find White people, not Asians, for help because they were more likely to sympathise.”

Serina* had even gone to the extent of putting her health at stake in a radical attempt to become heterosexual:

“I tried, hard, to make myself straight. I would make myself throw up every time I found a girl attractive. I tried my best to feel attracted to men. I wore a hijab for five years. I tried hard. It didn’t work.”

Serina* highlights the significance of staying true to one’s individuality:

“Many of us as gays feel hatred toward ourselves. If you hate yourself you will never live happily. Coming out is even harder because I can’t even accept how I am. I can change anything about myself, but not this. People think it can be changed, but it really can’t be.”

Despite her pure intentions, she feels torn in her life choices: “Being LGBT Asian is like feeling constantly lost.

“It’s like you’re floating around and just don’t belong anywhere…I don’t know who I am anymore…I’ve self-harmed. I’ve been through counselling to help me get by.

“Everyone has a tough time growing up. There aren’t many Asian role models for us in the media. I would look up to other LGBT couples in the media, through YouTube videos and listening to LGBT songs. It makes me realise I am not alone. I feel a bit jealous when other people have more positive experiences with being gay. I always wish I had that.”

“So many of us are trying to reconcile with our faith and sexuality but it’s never easy as there is always someone trying to reinforce prejudice.” 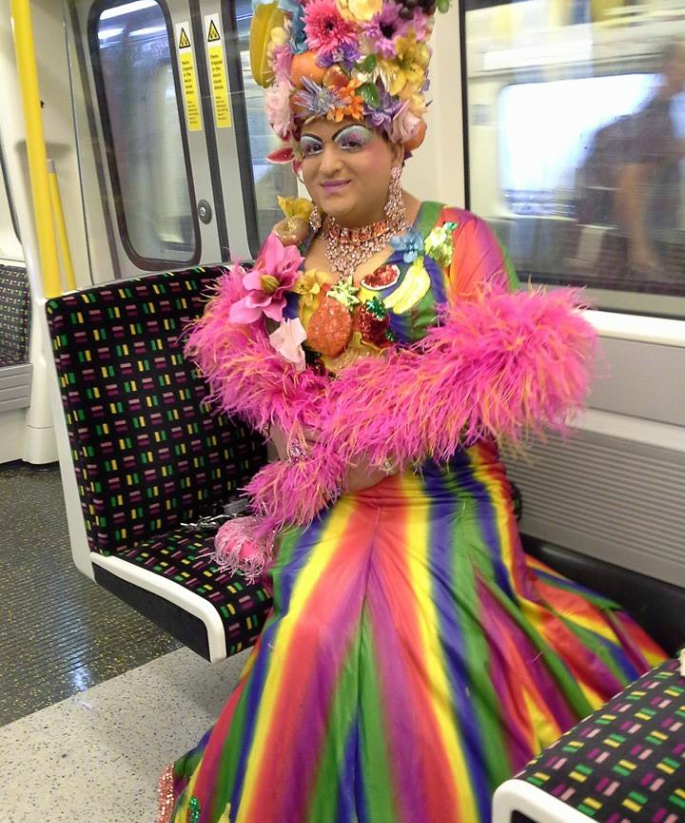 Naz/Seema Butt, a Pakistani gay man and drag queen also shares his ambition to offer support to those in a similar position.

His intention was to set up a support group for fellow LGBT members of the same background. He is now one of four founding members of Hidayah Muslim LGBT in Birmingham:

“Hidayah is an organisation created to increase representation, acceptance and equality of the Muslim LGBT + community.

Naz also describes his family’s reactions to his sexuality:

“I was caught dressing up [as a woman] when I was 11 years old and my mum got so hysterical. I felt as if my relationship with my parents changed overnight… I sometimes used to ask myself, ‘did I do something wrong?’ I remember praying that I wish I could be a boy because I felt so much like a girl even at a young age.

“I’m 37 years old now and only recently came out to my brother and sister. I was lucky because they both told me they love me and will always support me.

“I felt that I wanted to come out to my parents but unfortunately, they [siblings] all agreed that their acceptance would not be reciprocated by my parents.

“I sometimes feel angry and hurt that my family should have protected me and loved me unconditionally and kept me safe at a time when I really needed them.”

“I was finally able to come out as bisexual at university,” says 22-year-old Davina*.

“I had to be realistic about not limiting myself. None of my friends made a big deal of it so neither did I. I feel so much happier with myself. My parents are British born so they were more accepting of it.”

Struggles arise on various levels. Whilst men and women like Serina* press hard to be accepted by their peers, they also grapple hugely with their moral values.

The stories mentioned throughout this article have been gathered through interviewing members of our society in an attempt to receive a raw, honest and realistic outlook of the gay community and its progression in Asian communities.

Men and women like Asifa*, Khakan, Naz and Serina* are not alone. Many Asians are left abused, disowned and mistreated by their loved ones as a result of their sexualities. The struggle is within themselves as much as it is within the community.

The values and structure of religious beliefs are ingrained within each faith and cannot be easily altered to suit each individual’s outlook of their own life and choices, making acceptance a difficult and upward battle:

“Whether you are brown, white or black, your lifestyle is your own choice but it does not mean you have to bring religion or culture into it to accept how you live. No one cared in the past and people just lived their lives (gay or not). So, I do not want to be forced to agree or accept something, if I feel it is wrong in my view,” says Jay,* 35, from London.

Regardless of one’s religious, cultural or political views, a lesson can be learnt by all.

The bravery of those who continue to strive for equality should be applauded. We can only show our deepest respects to those who exhibit high levels of strength, perseverance and positivity in the cold face of hatred, despite our differences.

“If you’re brown you know exactly what it feels like to be discriminated against and you know it’s wrong. So why is it alright for you to put a gay person through the same hate?”

If you are affected by any of the themes in this article, do not hesitate to contact any of the following services for advice and support:

Images courtesy of Khakan and Naz