‘Peaceophobia’ is a play that uses modified cars to show how three working-class Muslim men are stereotyped and profiled in Bradford.

"Pride and freedom are the heart of car modification"

Peaceophobia is a startling play that was created out of frustration towards the way Muslim men were discriminated against in Bradford, UK.

The original idea was actually formed in 2018 after Common Wealth and Speakers Corner organised a car rally in Bradford city centre.

Here, drivers, teenagers and other men spoke of their experiences with Islamophobia. Using modified cars at the forefront, they discussed their passion for work and art.

The rally was hosted in the middle of Bradford city centre to celebrate resistance against racist behaviour from the community and the police.

But why cars? Well, young working-class men fix up these vehicles with expensive features and they became a social entity among Muslim men.

Admiring each other’s engines, exhausts and bodywork were fascinating for these guys.

But, these meet-ups were treated as nuisances and gave way for law officials to exert power and also arrest some men under unfair circumstances.

Whilst they explain their passion and infatuation with handiwork, behind their reassuring words lie ugly truths.

Terrorist accusations, racist remarks and even unfair arrests mean these young men are slowly chipped away at, losing their sense of identity and belonging.

As a London Premiere at Greenwich and Docklands Festival, this play has been a catalyst for South Asian men and their stories.

Casper Ahmed, Sohail Hussain and Mohammed Ali Yunis provide engaging performances, each differing from the other.

Peaceophobia is defiance against Islamophobia and the hostility still faced by many South Asians.

Using an incredible setting, strobe lights and engaging language, this show hones in on vulnerability, culture and of course, cars. 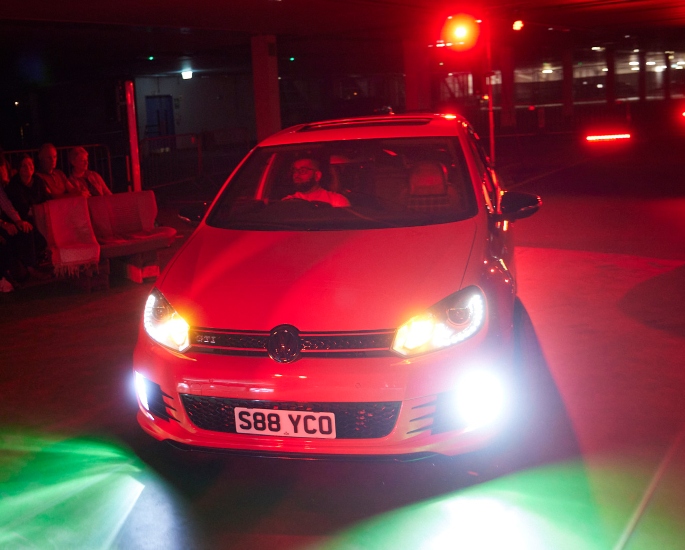 One of the standout elements of Peaceophobia is the vibrant and loud setting you are placed in as the audience.

This is not a normal stage performance, but a 360 degrees enveloping show.

Speakers are blaring out hip hop anthems, smoke screens are at each corner and the strobe lights work fantastically throughout the show.

A symbolic aspect of the setting was the use of a run-down 90s Vauxhall Nova.

Lights were missing, the body needed work and the emptiness of the car personified the characters’ emotions when recounting their stories.

As soon as the show starts, you hear the thundering booms of engines approaching the middle of the audience. This itself lights your eyes up and you feel like you’re at an actual car meet.

Sohail Hussain and Casper Ahmed are the first to arrive in their blaring Toyota Supra with a Boost Logic Manifold engine.

They’re followed by Mohammed Yunis in his Volkswagen Golf MK6 GTI, Edition 35, which has an R-Tech Tuned Stage engine.

Both cars are decked out in crazy bumpers, are lowered and have pristine paint.

They park up and proceed to tell us about all the rules of a car meet-up – the most important one is not to touch the car as it “leaves fingerprints”.

As they move through the rules, they incorporate mechanics into their monologues. One thought-provoking scene was when each character slid across a mechanic creeper and told a story about the police.

In one case, Casper Ahmed got stopped at an airport for ‘extra checks’ and was presumed to be affiliated with terrorism.

Peaceophobia is very unique in this way. It’s almost like you’re a friend to these characters, all bonding over cars and stories. But you still remain in shock, especially when talking directly to you.

The setting helps the mood of each act. Not only that, but the characters also use interactive tools and even engage with the audience to break the fourth wall.

There are magic tricks, party poppers and rapping monologues all decked out with fantastic stage management.

Much More than Cars 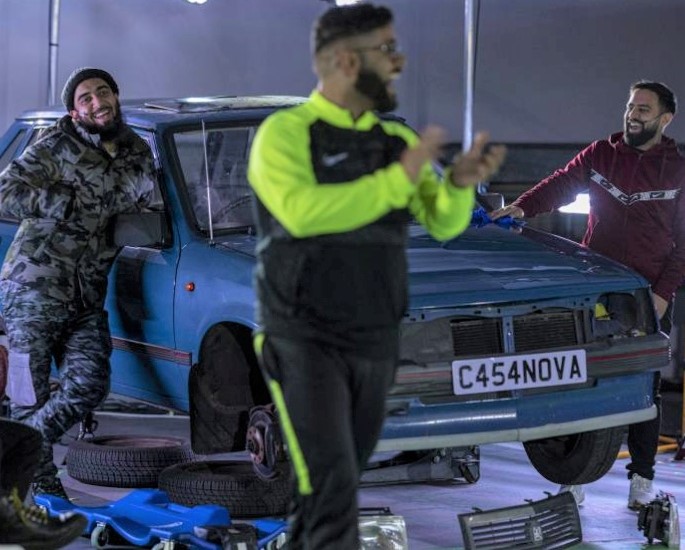 Of course, cars are at the forefront of this play. Socialist, Yunis Khan, expertly tells of how car modification is so pivotal to the show:

“Pride and freedom are the heart of car modification.

“A car is often worked on over years, reflecting the skills and identity of its owner, for whom hours spent in the garage detailing paintwork is a chase for perfection.

“Driving is for both transport and fun, a chance to detach from the every day, and knowing how to responsibly control a powerful car gives a sense of independence.”

But it is this same independence that is at times stripped from the characters. One of the most astounding uses of these cars was how they had voices.

Sometimes the characters would speak to their vehicles and the cars would play the role of their mind, ego or heart.

In one act, Mohammed Yunis goes through a catalogue of Volkswagen Golf cars. Dating each release of a new edition, his car cuts off Yunis after each year to state a political movement.

For example, before Yunis can go into Volkswagen’s 1995 release, his own Golf intervenes with a backlight and deep voice to map out the Manningham riots.

This continues from the formation of the BNP in the early 80s to the aftermath of 9/11.

It signified how important these cars are too young men and that they’re not just a thing to look flashy in. They are the soul of these characters and one they take great pride in.

The cars are symbolic of the life of young Muslim men. The creation of these vehicles is not just a celebration of their release, but also an important reminder of the race clashes of that time.

Whilst at times, this exchange is humorous, it’s a shocking reminder of decades worth of Islamophobia and the reluctance of government efforts.

Most importantly, it emphasises to the audience how desensitised humanity is becoming to these types of situations. 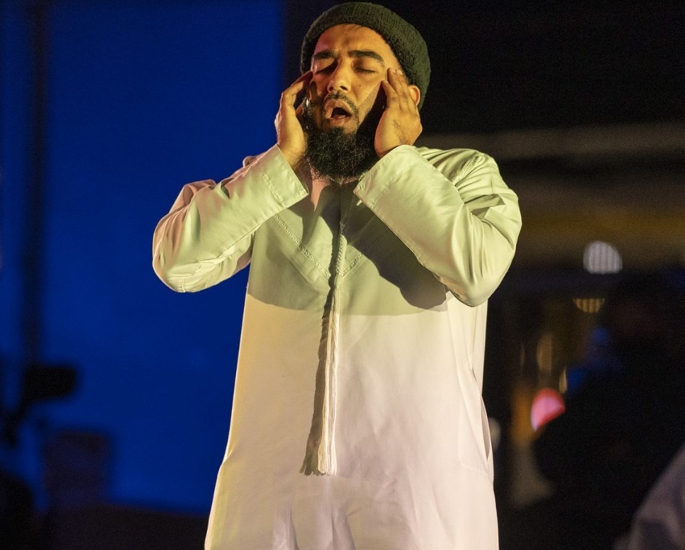 Of course, culture and racism are other thought-provoking themes in the play.

Each character details their experience of being stopped by police, arrested, questioned and discriminated against by their neighbours.

One of the most challenging yet promising narratives is presented by Casper Ahmed.

Throughout Peaceophobia, he details the importance of his faith and how it helps him to move past the prejudice he faces.

He tells the audience that he gets bullied for praying or believing in something, but others are rewarded for it.

One of the striking scenarios he expresses is when he is asked to come to the police station for a few questions.

Although through the voicemail, the officials won’t note why he needs to come into the station. So, Ahmed ignores their request but eventually goes in after a conversation with his dad.

Here, he is interrogated about his ‘affiliations’ with local mosques. To the surprise of the audience, the police officer asks him to be an informant.

With no context or evidence to back up their claims, Ahmed announces his frustration at them. He verbally tells the police:

“If someone is doing drugs or something bad, you really think I would come to you?

“I would rather help them out and teach them good instead of putting them in your hands.”

This confrontation is all too familiar to South Asian audience members watching on. It exemplifies the hostility between a minority and the police.

The overall conclusion here is that these young Muslim men have never been helped by the police, so why should they help them?

Whilst onlookers try to come to terms with the amount of grief these men have been put through, they slowly realise these are just the accounts of three men.

Imagine the experiences of the thousands of British Muslim/South Asian men that reside in the UK.

Whilst this catalogue of racial injustices is brought to the light, the play tops off in the most awe-inspiring way.

Ahmed takes centre stage and begins gracefully reciting a prayer in Urdu. The audience is silent, captivated by the tender voice that bellows around them.

Ahmed sings with such decorum, and the prayer is beautifully executed and has you in a trance.

Ultimately, despite all the tension, racism, profiling and discrimination, the play ends in the best way – peace.

Find out more about Peaceophobia here.