Pakistani wrestler Inayatullah created history by claiming the first medal for his country at the 2018 Youth Olympic Games.

"I dedicate this medal to Prime Minister Imran Khan and the whole nation."

The 17-year-old won a bronze medal in the third edition of the Youth Olympics after beating American wrestler Carson Taylor Manville 6-2 in the Men’s Freestyle 65kg category event.

His achievement handed Pakistan their first medal in the competition and second ever honour at the Youth Olympic Games.

However, in his second fight, he suffered a loss to Turan Bayramov from Azerbaijan. Thus the grappler from Pakistan had to settle for a Bronze medal match against Manville from the USA.

Post-conquest, in a video message posted on social media, the Peshawar based wrestler said:

“I want to thank my parents, coaches and my wrestling brothers who helped me with my training.”

“I would like to congratulate the Pakistan Wrestling Foundation for this medal. And I dedicate this medal to Prime Minister Imran Khan and the whole nation.”

In 2017, Inayatullah also snatched a silver medal in the 69kg weight category at the Asian Cadet Juniors Wrestling Championship held in Bangkok, Thailand.

The Pakistani wrestler is affiliated with the Water and Power Development Authority (WAPDA).

Through a press release issued, the chairman and patron in chief of WAPDA Sports Board congratulated Inyatullah on his medal triumph for Pakistan.

WAPDA sports players have demonstrated their potential at the national level, along with bringing success to Pakistan at global events. 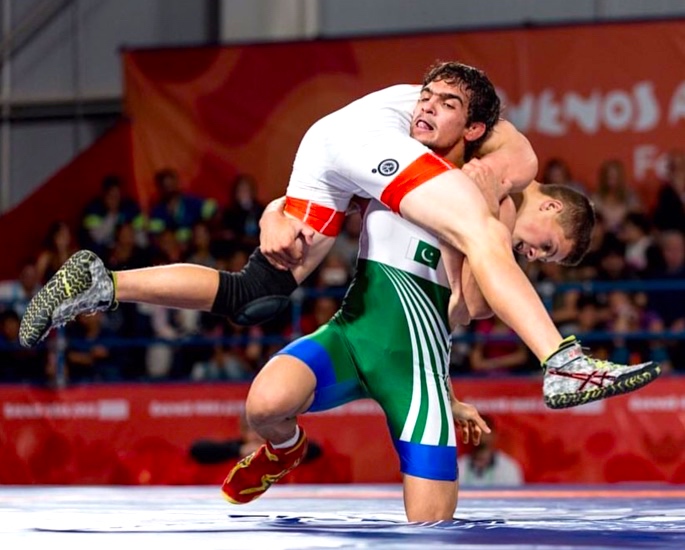 It has been a good period for Pakistan grapplers with Muhammad Inam Butt winning Gold at the 2018 World Beach Wrestling Championships in the 90kg Freestyle Seniors event.

Speaking about Inayatullah’s victory and requesting authorities to help people within the sport, Inam said:

“I just want to tell the government and the Pakistan Sports Board that they should open their eyes and see how well the Pakistani wrestlers have been doing internationally.

“I’m very proud of Inayat. He has been the most consistent wrestler along with me and Muhammad Bilal.

“The government and the authorities should at least think of investing in us. It is a huge achievement for Inayat, he has been dedicated to wrestling and he has done brilliantly.”

“I hope him dedicating the medal to our Prime Minister would help the government see wrestlers’ achievements. I hope he gets a big welcome and wouldn’t go through what I did, even after winning the world title.”

While it was mixed fortunes for Inayatullah, the future is bright for this shining talent.