Malaika Arora shared a video of her highlights from her Maldives holiday and one clip showed her stunning figure in a bikini on a yacht.

"Fire across the Maldives."

Malaika Arora stunned as she posed in a printed bikini while standing on a yacht.

She and her boyfriend Arjun Kapoor have just returned from their lavish Maldives holiday but it seems she hasn’t got over the holiday mood.

Malaika has now shared a video that shows some of her best moments during their holiday.

The video opened with a monochrome picture of the actress looking away from the camera. This was followed by her and Arjun cycling through the woods. 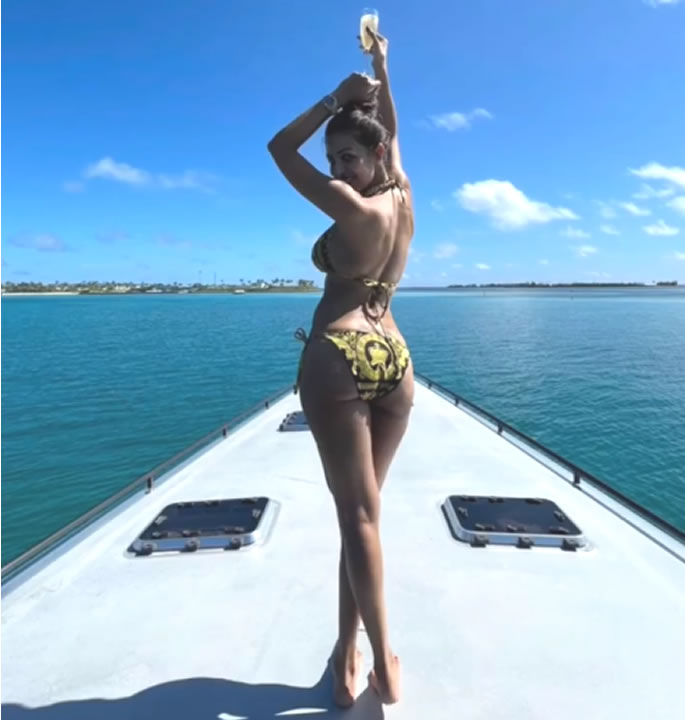 Other clips showed the actress in summery outfits as well as her bikini looks.

One highlight featured Malaika in a black and yellow printed bikini. She looked gorgeous as she flaunted her figure whilst standing on a yacht as it sailed across the ocean.

She was also seen topping up her tan on the yacht, opting for a makeup-free look.

Social media users loved her look as well as the things she got up to.

Another wrote: “Fire across the Maldives.”

Despite posting her bikini look, one fan wanted to see more pictures of the actress in a bikini, writing:

Malaika Arora previously raised temperatures with several pictures of herself in a bikini and enjoying the sunny weather.

Malaika went on a quick getaway with Arjun to take a break from work.

The couple has been in a relationship for the past few years.

On the work front, Malaika is currently judging the reality show India’s Best Dancer. Meanwhile, Arjun will next be seen in Mohit Suri’s Ek Villain Returns.

Malaika is a fitness enthusiast and has her own yoga studio.

During their holiday, she made sure to make Arjun work out with her.

He had shared a video of them on an underwater treadmill, writing:

“When the girlfriend is a tougher taskmaster than your trainer!!!

Sharing her fitness secrets, Malaika had said in 2019:

“I think the combination of doing Yoga and following an intermittent fasting routine, daily, has just completely changed my way of thinking towards eating, food, etc.

“I’ve also turned vegetarian over the last one year.

“More importantly, I don’t deprive myself of any food.

“I eat everything but I just eat it during the fixed time frame. So, my last meal of the day gets done by 6:30 pm.”

Dhiren is a journalism graduate with a passion for gaming, watching films and sports. He also enjoys cooking from time to time. His motto is to “Live life one day at a time.”
Katrina & Vicky’s Wedding Video sold to Amazon for Rs. 80cr?
The South Asian Participants of BAFTA Breakthrough 2021