Four men from London have been jailed for two incidents of kidnap, false imprisonment and blackmail with threats to kill and demands for money.

Over £600 in cash was taken out on the victim's card

The four men were involved in two incidents of the offences they were trialled and sentenced for at Southwark Crown Court.

The first incident took place on September 21, 2017. A 29-year-old man known to Chowdhury was met by him at about 6.00pm. He took the man to Derisngham Avenue in Forest Gate, where Kodoris was waiting.

The man was subjected to assaults and threats for several hours and then the offenders forced the victim to hand over his bank card.

Over £600 in cash was taken out on the victim’s card. Then, photographs were taken of the man’s identification documents and pictures of his family. He was then allowed to leave the address.

Threats were then made towards him and his family and more money was demanded from him.

The victim who had reddening of the skin from kicks and beating managed to report the incident to the police.

The second incident which took place on March 10, 2018, involved another 29-year-old man as well.

According to the police interview, he had received a phone call from Abdal, who knew him, telling him to go to an address in Bow, London, for the prospect of getting a job and employment.

On his arrival at the Bow address, the victim was greeted by Abdal and then taken upstairs inside the property by a number of men including Chowdhury and Kodoris.

They then started beating him with wooden sticks and began searching his pockets. They took his ID cards, mobile phones and £650 in cash which had on him.

The offenders then told the victim to contact his family and friends to pay money for his release, on the belief that they were rich and wealthy.

The victim was subjected to further beatings and threats for several hours. He was then told to get another £50,000 from his relatives or otherwise, he or his family would be killed, hinting that they had a firearm.

After the victim failed to get the money, the four men took him to his home address and left him there.

The victim went to the Royal London Hospital in Whitechapel after he suffering a broken arm and scratches to his face from the attack. Police were called to the hospital and began an investigation after speaking to the victim.

Officers reviewed CCTV footage and phone records during their investigation which led them to charge the four men in 2018 for their offences against the two victims. 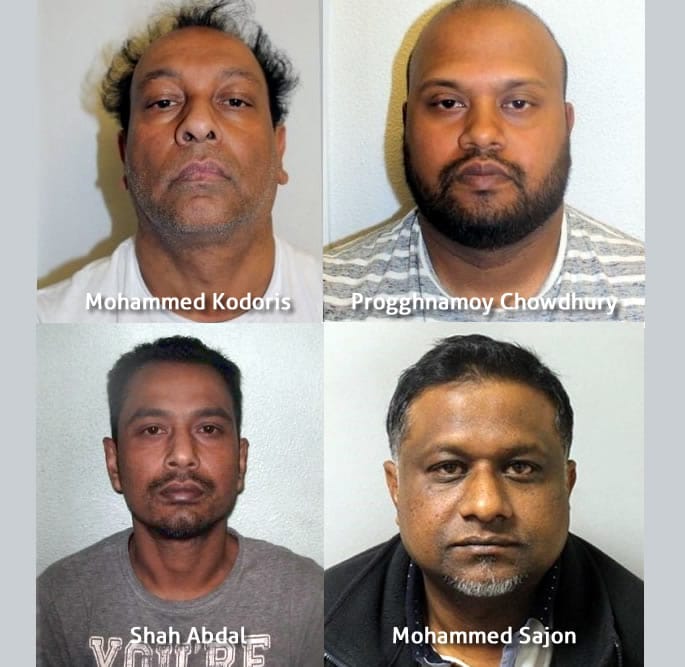 Kodoris, Chowdhury and Sajon pleaded guilty to the offences. However, Abdal was found guilty at the end of the trial.

The jail sentences handed to the men were as follows.

“These were terrifying incidents in which two men were, in completely separate attacks, taken completely against their will and subjected to a horrible level of violence and threats.

“I am pleased to have secured significant custodial sentences for each of the men involved in these very serious crimes.

“I’d like to thank the victims for their bravery in supporting our investigation and hope that this gives them some small measure of comfort in seeing justice done and their attackers imprisoned.”

Nazhat is an ambitious 'Desi' woman with interests in news and lifestyle. As a writer with a determined journalistic flair, she firmly believes in the motto "an investment in knowledge pays the best interest," by Benjamin Franklin.
Punjab Rape Victim gives Birth to Child not Knowing Father
Pakistani Woman strangled Husband to Marry his Friend