The son of a doctor who died of Coronavirus has said that PPE shortages are costing lives. The 18-year-old revealed more about the issue.

"the courage my dad had to point out something wrong"

Intisar Chowdhury has warned that PPE shortages are costing lives. This comes after his father urged the government for more protective equipment.

However, he contracted Coronavirus and spent 15 days battling the virus before dying in hospital.

Now his 18-year-old son has opened up on the lack of protective equipment, saying that it will cost lives. He spoke to ITV’s Good Morning Britain.

“When my father made the post about the PPE which I’m sure you’ve seen, a letter to Boris Johnson, I didn’t know about it because he really did not want to convey his feelings about his own life and the lives of his co-workers to me and my sister.

“When he wrote that letter, he was in such an ill state, it was really hard for him. He was unable to vocally communicate with me or my sister or my mother.”

Mr Chowdhury went on to say that his father made sure that the government was held accountable for not providing enough protection for frontline workers.

Host Piers Morgan asked Mr Chowdhury for his reaction to an apology by Priti Patel and a statement by Matt Hancock.

He said that the deaths of frontline NHS workers are 100% caused by a lack of PPEs.

Prior to his death, Dr Chowdhury wrote to the Prime Minister, asking for PPEs to be available for “each and every NHS worker in the UK”. 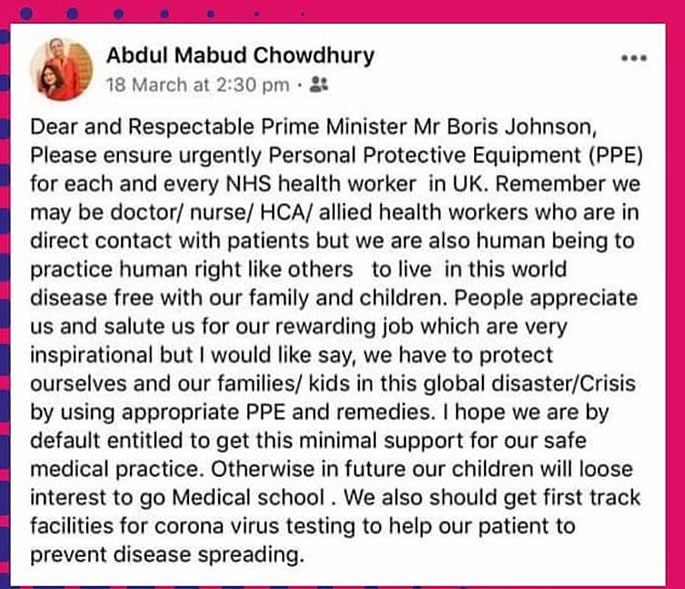 Dr Chowdhury worked as a consultant urologist in east London. He leaves behind a wife and two children.

Mr Chowdhury said he was proud of his father for issuing the warning about PPE shortages.

He said: “He wrote that post while he was in that state, just because of how much he cared about his co-workers, and the courage my dad had to point out something wrong that the Government was doing, which I’m so proud to say that he was able to do.

“Even in his state, he did that, and I’m glad that even though I only found out about it yesterday, I’m not surprised, I genuinely am not surprised, because he is a man of the people.”

He said his father was “unfortunately not going to be the last NHS frontline worker to die’ during the outbreak”.

He added: “I’m glad it is getting the attention now that it needs to protect NHS workers on the front line because it pains me to say that my father is not the first and he is unfortunately not going to be the last NHS frontline worker to die.

“If there is anything we can do to minimise that from happening as much as possible, that’s all we need to do.

“I want everyone to remember him for the kind and compassionate hero he was, because he was a hero.

Dhiren is a journalism graduate with a passion for gaming, watching films and sports. He also enjoys cooking from time to time. His motto is to “Live life one day at a time.”
Prime Minister Imran Khan trolled for Wearing Tracksuit
Indian Student arrested for Fake Pakistani Model Facebook ID