An Indian student from Chhattisgarh has been arrested for running a fake Facebook profile in which he used the ID of a Pakistani model.

they found out that the perpetrator was actually a man.

Police arrested an Indian student for using the identity of a Pakistani model to run a fake Facebook account.

Ravi Pujar, of Raipur, Chhattisgarh, used the model’s personal information and photos for eight bogus accounts. One of the most prominent accounts was under the name Nisha Jindal.

Police discovered that Pujar had been running the fake account since 2012.

Many people in Chhattisgarh used to like and comment on the pictures as they believed Nisha was a real person. This included politicians and journalists.

However, Pujar’s crimes came to light when the police received several complaints. People alleged that it was a bogus account due to the profile information.

Officers decided to take action and arrested Pujar on April 18, 2020.

SSP Arif Sheikh explained that they had been receiving complaints for over a month.

Complainants told police that they were being misled by a person on Facebook named Nisha. According to the profile, Nisha was associated with the World Health Organisation and the IMF.

Police registered a case and an investigation was launched.

During the investigation, police requested information from Facebook but they did not receive any help. Instead, the police’s cyber team tracked the IP address and located the offender. 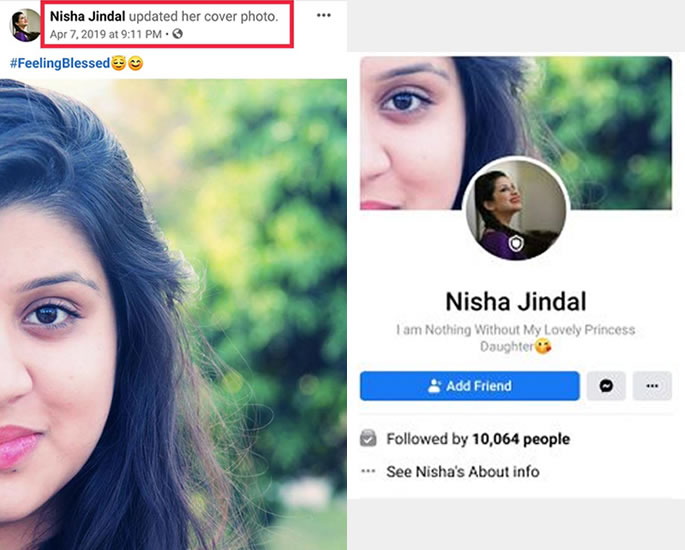 When they went to make the arrest, they found out that the perpetrator was actually a man.

During questioning, Pujar explained that he used to take the photos of a Pakistani model for his fake profiles.

The Indian student said that he ran a profile under the name of Nisha Jindal. By interacting with lots of people, he made over 4,000 friends.

He told officers that he involved one of his family members. Pujar went on to admit that the other Facebook accounts were also fake.

According to the police, Pujar has been studying IT Engineering since 2009. He is still a student because he continues to fail his exams.

He is a resident of Kabir Nagar.

SSP Sheikh said that a case has been registered against Pujar at Civil Line Police Station. Pujar remains in custody but the investigation is ongoing.

After his arrest, Pujar’s mobile and laptop were seized. Police are currently investigating his bank account records to see if he used the fake profiles to steal money.

Dhiren is a journalism graduate with a passion for gaming, watching films and sports. He also enjoys cooking from time to time. His motto is to “Live life one day at a time.”
Late Doctor’s Son says PPE Shortages are Costing Lives
Indian Woman has Head Shaved to Donate Her Hair