Jhai Dhillon is a former professional footballer with Stevenage. We present an exclusive Q&A with the football player about his career and food business.

Football player, Jhai Dhillon who had a professional career in the sport, has co-founded RNS Meals, a successful healthy food prep business, with his younger brother Simmy Dhillon.

Jhai Dhillon was born in Stevenage, Hertfordshire on April 2, 1995. Both of his parents are Indian, but the UK is the place of their birth.

His father Chamkor Dhillon is employed by IBC, a British automotive manufacturing company, part of the Vauxhall group.

His Mother Kal Dhillon used to work at Tesco, but due to the success of RNS Meals, she retired in December 2019.

Jhai Dhillon made his competitive against Wycombe Wanderers in August 2011. Playing in the left-back position, Jhai has played for several clubs.

Whilst playing at non-league clubs, Jhai Dhillon set up RNS Meals with his brother. With the business flourishing, he eventually went semi-professional.

During COVID-19, Jhai and Simmy have been in a unique position to assist others Courtesy of RNS Meals. 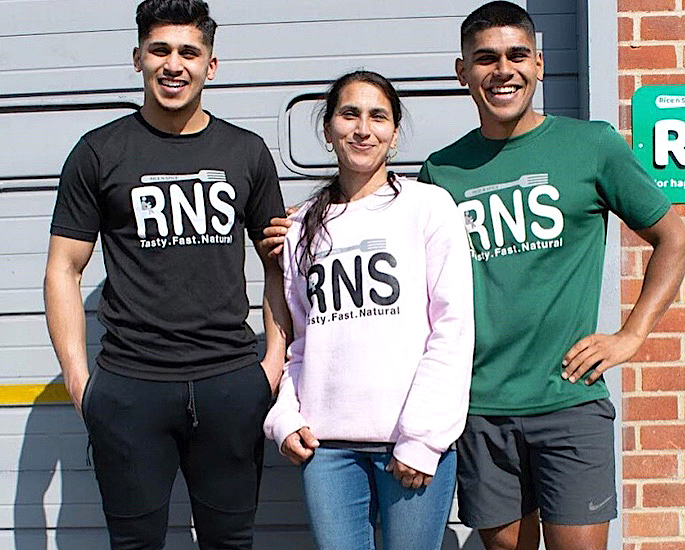 RNS Meals have gone beyond their capacity to help Premier League and football league players. They have delivered special meals so that footballer stay healthy, safe, fit and sharp during lockdown whilst away from their clubs.

Additionally, the company has donated thousands of meals to the local homeless and the NHS. Ever since the coronavirus hit the UK, RNS Meals have Fed more people than ever before, enabling them to follow government guidelines to stay safe at home.

As a result of the increase in demand, RNS Meals have had to expand their operations as well as double the size of their commercial premises.

Tell us briefly about your football journey?

Like many kids, I started off playing for my local Sunday league side (Hitchin Town FC). I always felt like I was one of the best players in my area.

However, it wasn’t until Chelsea FC launched their ‘Search For An Asian Soccer Star’ programme in 2009 that I realised I could actually go further in the sport.

I ended up winning the competition and spent a season at Chelsea schoolboy (2009-10). It is there that I was training at the esteemed Cobham training ground.

My contract was not extended for the following year and I left Chelsea aged 15. I then joined Stevenage FC where I signed a scholarship and eventually a pro contract. I remained with them until I was 20 (2010-15). 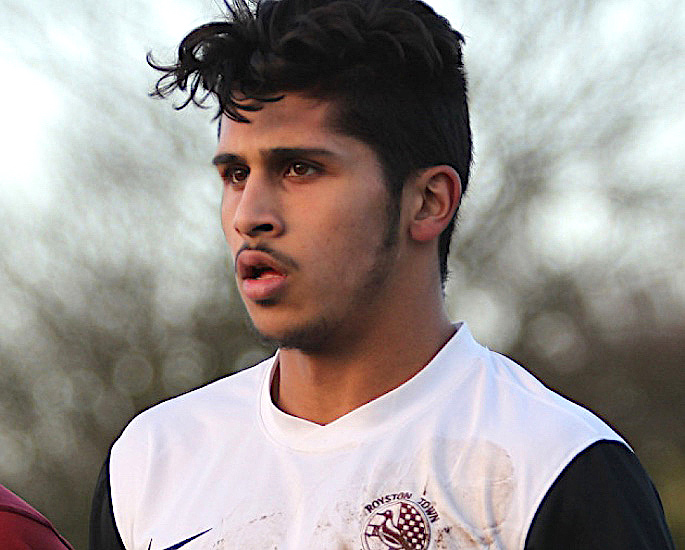 Why did you make the decision to move on from football early?

“I never expected to stop playing football. I found I was not enjoying football as much as I had done in my younger years.”

To be honest, when I signed a pro contract, the added pressure and never being able to switch off from football played a part. It began to feel more like a job than a hobby.

Towards the end of my time at Stevenage, my brother and I founded a meal prep company. I then balanced this alongside playing for non-league teams, until 2018. I then decided to stop playing completely to push the business forward.

“The plan was to push the business forward and come back to playing football in a year or two.”

I didn’t expect things to happen as quickly as they did. After a season out, I returned to playing again in September 2019 for my local side (Hitchin Town).

This was possible as we managed to hire several members of staff, which meant I could free up my Saturdays. 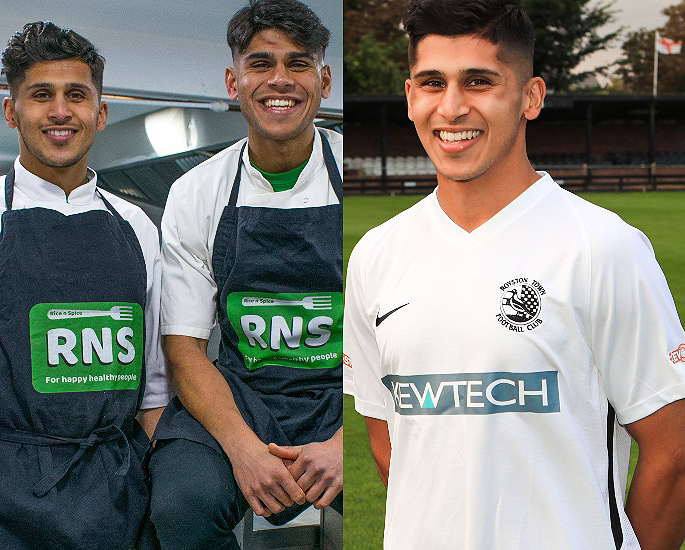 Which football players have you helped during the lockdown and how?

We have helped several footballers to stay fit and healthy during the lockdown. This ranges from non-league, right the way through to the Premier League.

The players had been advised by their clubs to avoid supermarkets and going out as much as possible. We helped by preparing High Protein, Nutrient Dense and Portion controlled meals for them.

We then ensured these were delivered to their door via contactless delivery. This meant they were able to follow both government and their clubs’ guidelines to stay home.

This usually means they have their meals for the week delivered chilled on a Monday. Thus they can store these in the fridge/freezer and heat the meals as needed throughout the week.

High profile names include the Norwich full-backs (Max Aarons and Jamal Lewis) who have played over 45 Premier League games between them this season.

We have also helped several Championship players, such as Yan Dhanda (Swansea City), Korey Smith (Bristol City), Jay Da Silva (Bristol City). They are all safely back in training with their respective clubs.

Then a host of League 1 and 2 players including Adebayo Akinfenwa (the strongest man in football: Wycombe Wanderers), Keshi Anderson  (Swindon Town) and Jevani Brown (Colchester United),

Nick Freeman, Darius Charles, Josh Parker and Anthony Stewart from Wycombe Wanrees are the other players that we have assisted. 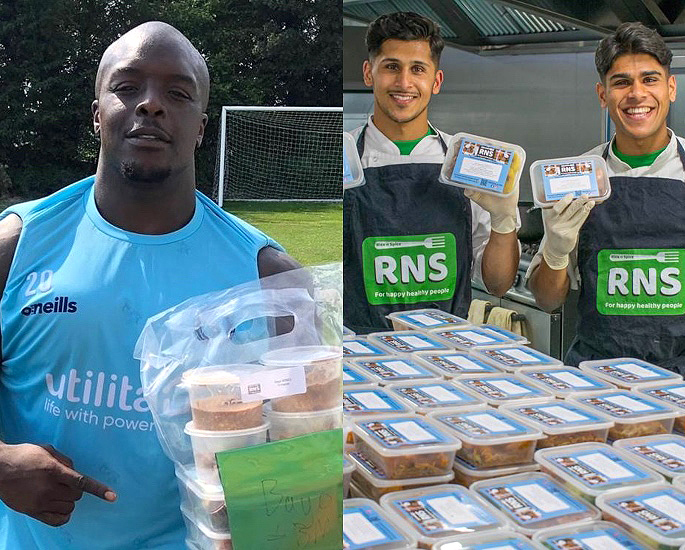 Talk us through business expansion relating to sports and other fields?

Our clients at RNS Meals vary widely, from Premier League footballers to students and working professionals in the city.

Our meals are essential for anyone who would like to eat healthier but doesn’t know what exactly they should be eating or have the time to prepare these meals.

Previously we delivered within a 15-mile radius of Hitchin (Hertfordshire).

However, due to the increase in demand, both from professional athletes and the rest of the public, we have introduced nationwide delivery. Hence, we can now deliver anywhere in the UK.

“We’re looking forward to helping lots of new footballers in clubs around the country.”

We equally hope to assist the rest of the public, who now have access to the same meals that Premier League footballers use! 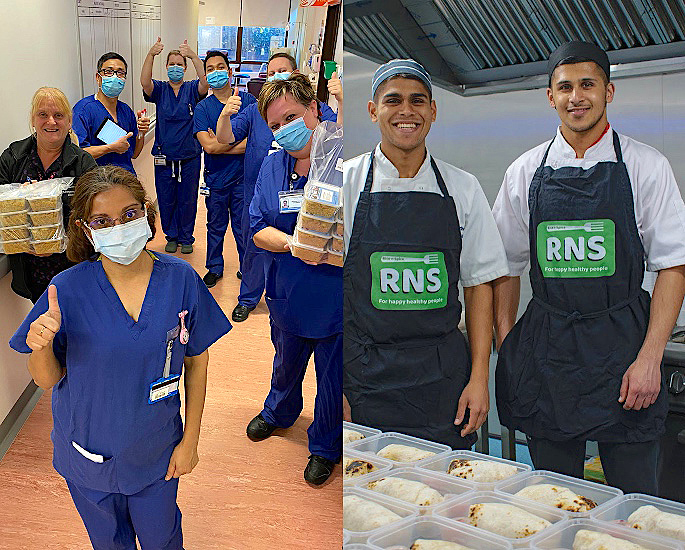 During COVID-19 you have helped many, can you throw some light on this?

Prior to COVID, we made weekly meal donations to the local homeless shelter in Hitchin. We have been doing this for over 9 months. We see it as giving back to the local community.

It’s great that myself, my brother (Simmy) and my Mum can take a break from work and go into the homeless shelter each week and speak with the guys there and see how our meals are actually benefitting our local people.

Throughout COVID, we also thought it only right to help the NHS in the same way. We have done this by making weekly meal donations to the Lister hospital in Stevenage.

Those guys kept the country going and were working ridiculous hours. The last thing they would want to do after a 15-hour shift is a queue outside a supermarket for 45 mins before being allowed in and then coming to empty shelves.

As the number of meals we could donate were limited to the hospital closest to us, we also offer all NHS staff discounted meals regardless of where they work in the UK.

During COVID we were able to help more people than ever before and also saw a sign-ups increase by 300% compared to this time in 2019.

But we’re just glad we can do meaningful work and once this is all behind us, we can look back and say, we did our part. 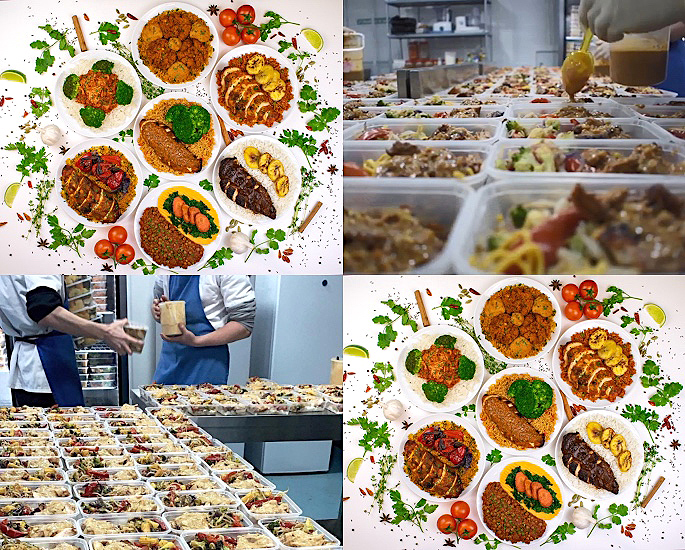 What are your future plans and ambitions?

After our non-league football season ended early due to the pandemic, I’m looking forward to next season. But more so, I’m excited to see how many more people we can help now that we can deliver anywhere in the UK with RNS Meals.

We hope in future to be able to partner with pro clubs to become their official matchday meal providers, rather than individual players. And who knows maybe even one day sponsor a World Cup.

We’re proud that we can give the rest of the public, access to the same chefs and types of meals that Premier League players use.

“Finally, we hope to continue helping all our clients live happier and healthier lives.”

During the course of COVID-19, Jhai Dhillon and his team have also retained their staff and recruited others who were seeking employment. RNS Meals is a debt-free business, with neither Jhai nor Simmy taking a salary from it.

To find out more about the brilliant work that Jhai Dhillon and RNS Meals are doing please check their official Instagram here.