When Dinesh Upadhyaya is not teaching science to his Mumbai pupils, he bides his time breaking world records by stuffing objects into his mouth.

Nicknamed ‘Maximouth’, one of his latest feats saw him clutching at straws, cramming all 1,001 of them in his gob for 60 seconds!

In a recent challenge published on YouTube, the 6ft 6 inch-tall professor squeezed a whopping 76 cherry tomatoes into his mouth and released them all fully intact.

249 dice ~ his students can no longer play Snakes and Ladders at lunch time!

Dinesh has been breaking world records since 2010, when he discovered his new found talent

When asked about his preparation techniques, he says: “To enhance my mouth stuffing capacity, I practice yoga and breathing exercises regularly.”

His unusual ability does however take its toll on the record setter, who admits: “After practice or a record attempt, I usually experience swellings in my mouth.

“During the attempt, I feel sensations of suffocation. I always overcome such minor things though.” 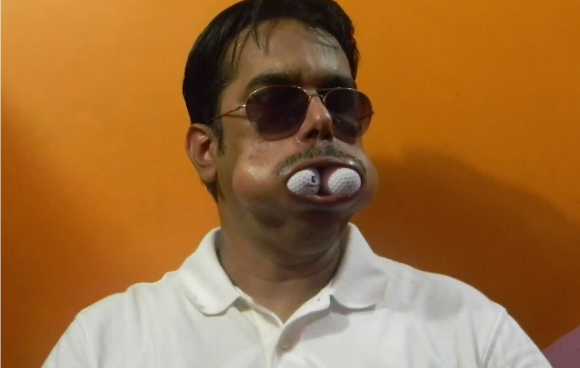 Apart from being the highest Indian Guinness World Record holder with 48 records to his mouth (so to speak), Dinesh’s talents are not purely oral.

In total, he holds over 200 world records for bizarre triumphs registered by institutions such as RecordSetter and Limca Book of Records.

And he wants more, saying: “My dream is to break all possible mouth stuffing records as soon as possible.”

Bipin enjoys cinema, documentaries and current affairs. He writes silly rhyming poetry when free, loving the dynamics of being the only male in the household with his wife and two young daughters: “Start with the dream, not the barriers to fulfilling it.”
Sony BSP60 ~ Smart Bluetooth Talking Speaker
Realbotix creates World’s First Sex Robot