Indian Journalist ‘Beaten’ by Cops who ‘Urinated’ in his Mouth

An Indian journalist has alleged that he was beaten by police officers in Uttar Pradesh. He also claimed that they urinated in his mouth.

"they urinated upon right into my mouth."

Indian journalist Amit Sharma has alleged that he was beaten by two members of the Government Railway Police in Uttar Pradesh.

According to officials, they allegedly assaulted him following an argument. Sharma also claimed that the officers urinated into his mouth.

The incident comes at a time where the state has gained attention over the arrest of journalists on charges of “defaming” Chief Minister Yogi Adityanath.

Sharma was beaten in Shamli where he was covering news of a train which had derailed.

The journalist spoke about his ordeal and said:

“They were in plain clothes. One hit my camera and it fell down. When I picked it up, they hit and abused me.

“I was locked up, stripped and they urinated upon right into my mouth.”

Officer Ram Lakhan Mishra said: “The incident took place when the journalist had gone to cover the derailment of a few bogies of a goods train in Shamli.

“There was a heated exchange of words among them and hurling of abuses.”

Several local journalists heard about the incident and rushed to the area where they recorded footage of the police officers assaulting Sharma. 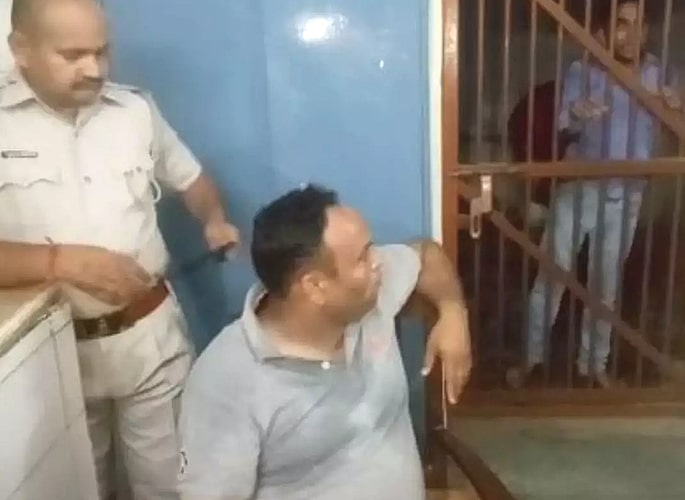 They also contacted senior officials at the police headquarters. The Indian journalist was then detained by the officers.

Sharma was later released after the local journalists protested at the police station.

“10 to 15 days ago, I had done a story on them. The mobile phone that they had snatched from me had the footage of the story.”

A senior GRP official confirmed that Sharma had been released on June 12, 2019, at 7 am.

The Uttar Pradesh Police, which oversees the GRP, took note of the video.

Director General of Uttar Pradesh Police OP Singh then ordered that GRP’s Station House Officer Rakesh Kumar and constable Sanjay Pawar be placed under suspension after they were allegedly responsible for the assault.

They confirmed the suspension in a Tweet. Uttar Pradesh Police posted:

“We have come across a video where a journalist has been beaten up and put up in a lock up.

“Strict punishment shall be accorded to policemen misbehaving with citizens.”

Many people on social media have said that the incident is another example of journalists being targeted in Uttar Pradesh.

#WATCH Shamli: GRP personnel thrash a journalist who was covering the goods train derailment near Dhimanpura tonight. He says, "They were in plain clothes. One hit my camera&it fell down. When I picked it up they hit&abused me. I was locked up, stripped&they urinated in my mouth" pic.twitter.com/nS4hiyFF1G

Dhiren is a journalism graduate with a passion for gaming, watching films and sports. He also enjoys cooking from time to time. His motto is to “Live life one day at a time.”
Indian Women held in Dubai for Refusing to Dance in Hotels
Dad & Son accused of ‘Controlling Lives’ of Daughters & Wife