A woman in India turned down an arranged marriage proposal after the man stated he dislikes dogs. DESIblitz has more.

"There was a lot of family pressure."

Karishma Walia, who works in Gurgaon, rejected an ‘eligible bachelor’ from New Delhi after he said he dislikes dogs.

Walia and her proposed man were communicating via whats app to try and spark up chemistry to see if they could be true soul mates. However, after the guy said Lucy – Walia’s cute pup- would be a problem, she told him the marriage was off.

“Having a dog is not a temporary phase. I can’t abandon my dog for anyone,” says Walia.

The man initially responding with “Are you serious!? My God”. He was taken aback by the rejection, to which he rudely replied: “I am sorry to say this. But please marry the dog in that case.”

“There was a lot of family pressure, and they still think I did the wrong thing by raising the concern about my dog.”

The man claimed that a dog is a temporary phase and that his mother also dislikes dogs. After a while, he began again to try and change Walia’s mind, but she stood her ground.

Walia stated how she did not like how he would try and enforce his views on her, by saying things like: ‘family should be a priority and not career’. 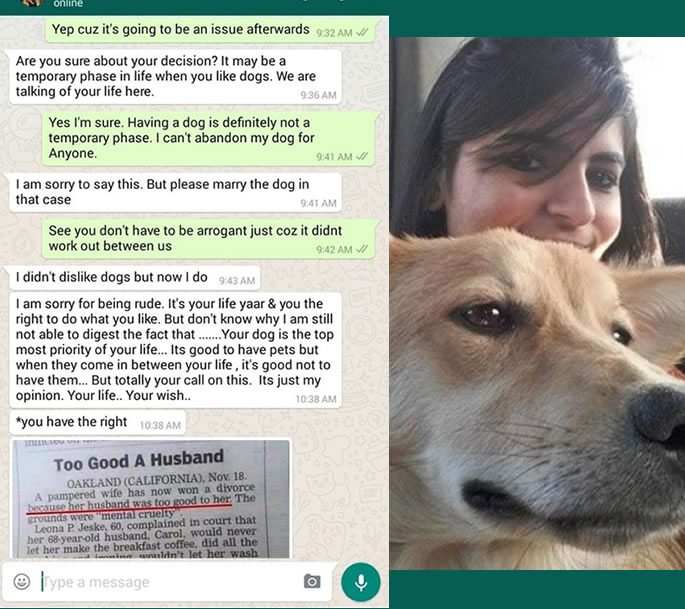 “I gave up when he commented about my dog,” says Walia. “I don’t know why my family still thinks he’s an eligible bachelor.”

She has now stopped talking to the guy and has been heavily praised by animal lovers all across social media.

Many even picked up on the fact that he tried to bring in pleasing his mother into the equation, stating:

“never settle for a man who puts another woman’s happiness before his wife’s. That’s just asking for martial problems. Bullet dodged!”

Many others are more than happy that Walia stood up for herself, claiming she was wife material for turning a guy down for her beloved dog.