Indian lover, Vijay Kumar, after being in a relationship with married woman Saruna Kumari, sent intimate images of her to her husband.

he then still sent all the photos to her husband

In the Punjab state of Ludhiana, an unhappily married woman, Saruna Kumari, has been double-crossed by her lover, Vijay Kumar.

She told the media that Kumar blackmailed her after having a sexual relationship with her and the promise of marriage.

27-year-old Kumari who is from Pathankot has filed a police complaint against Kumar.

Kumari said that in 2010, she got married to a man named Ashwin Kumar from a neighbouring village with whom she has a six-year-old son.

Vijay Kumar was a close friend of her husband. He visited their home frequently and Kumari noticed that he would always look at her attentively.

Three years prior, when her husband went away to work in another country, Vijay, lured her into a relationship with him.

Thereafter, their relationship turned into a sexual and loving relationship and he began to say he wanted to marry her and look after her young son.

Kumari revealed that during their intimate times Vijay frequently took photos of her naked and with him on his phone.

Sometime later, Vijay showed her all the photos he had of her on his phone and started to blackmail her. Threatening to send them to her husband or make them public.

Using this threat, he first took her gold wedding jewellery and then forced her to give him one lakh rupees.

After this, he then still sent all the photos to her husband on his phone.

Kumari said that when her husband, Ashwin, saw the intimate and nude photos of her, he was heartbroken.

Then a year earlier Ashwin after receiving her photos filed a complaint with the international NRI (Non-Resident Indian) police station.

Police took immediate action and investigated the case. They then arrested Kumari his wife and her lover, Kumar. 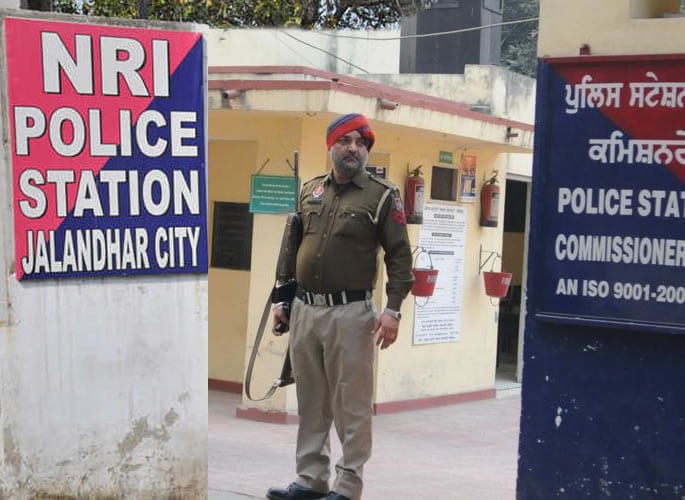 At the police station, Kumar convinced Kumari that he was ready to marry her and that she should leave her husband, and not give any evidence against him.

Kumari fell for his persuasion and believed him once again.

When she was questioned by police, she did not say anything against Kumar as he asked her to.

After which, she spent 6 days in Nari Niketan, a women’s refuge, from where her mother bailed her out.

Now, neither lover or husband is interested in her.

A jilted Kumari says Kumar has ruined her life to the extent that if he tried to marry to someone else, she would kill him and commit suicide herself and the police would be witness to it.

Kumari stated that one month earlier she filed a complaint with the Senior Superintendent of Police (SSP) at Jalandhar police station.

In her statement, she told police that her lover, Kumar, after sexually using and looting her had left her to seek someone else to marry.

The SSP sent the filed complaint to the local police station concerned to investigate the matter.

Drama at the Station

It is now after a full month, police summoned Kumar to the police station.

Kumar came to the station supported by his mother, father and people from his village.

Drama and commotion between the couple then commenced at the police station.

Kumar said that Kumari was the one obsessed with him and she was the one who caught him in her love trap.

She reminded him and said it is my life that you have ruined.

Kumai added that you have taken my son’s father away from him and a husband away from me, and on May 25, 2019, you are going to marry another.

When Kumari showed the police the intimate photos of them both and some days later, text messages Kumar sent to her apologising for his actions, she told police her intentions.

She threatened police that if they were not going to help her after the sexual violation and life-ruining antics she has experienced, she was going to kill Kumar and commit suicide.

In response, the police stated they had only received the complaint from Kumari only a week earlier.

Due to elections, they had resource issues, so they could not call Vijay Kumar in any earlier.

Today, they have been called in and they will continue with the questioning related to the case.

Could this be Amir and Faryal’s New Home in Ascot?
Accountant smashed Ex-Wife’s Head on Car for Dating White Man