London’s Excel opened its doors to the first ever India Fashion Week between October 9 and 11, 2015. Showcasing three days of show stopping fashion, DESIblitz has all the highlights.

"I love clothes and I would change them six times a day if I could!"

Jo looked stunning in sparkly black dress and red lipstick, and shared her excitement for beginning film school in Mumbai, starting from December. 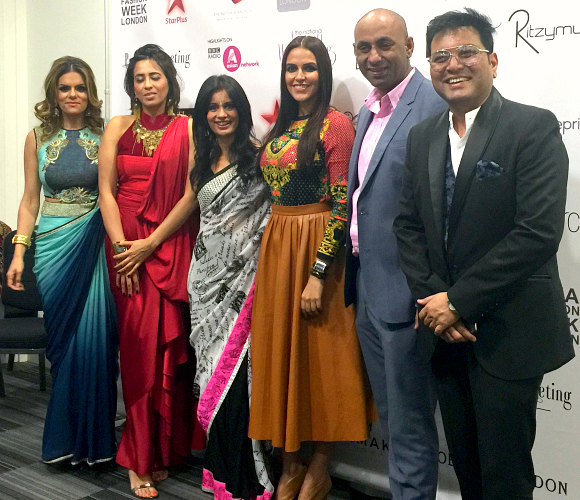 Neev notably opened the VIP show with model Rahi: “It’s a great event to be a part of, where it shows the glitz and glamour of our heritage,” she said.

Brand Ambassador of IFWL was Bollywood’s Neha Dhupia. The beautiful actress wowed as a showstopper in a Payal Singhal lehenga and poncho.

Speaking about IFWL, Neha Dhupia said: “India Fashion Week is a great platform for consumers to come together and see brilliant designers under one roof. I feel that as a community we love to touch and feel the products that we want to buy and now they can do that.”

Upon talking about her own sense of style, she said: “I love clothes and I would change them 6 times a day if I could!

“I am conscious of what I wear and wear what I feel like wearing at the time. So, at the moment I’m feeling bright and colourful.” 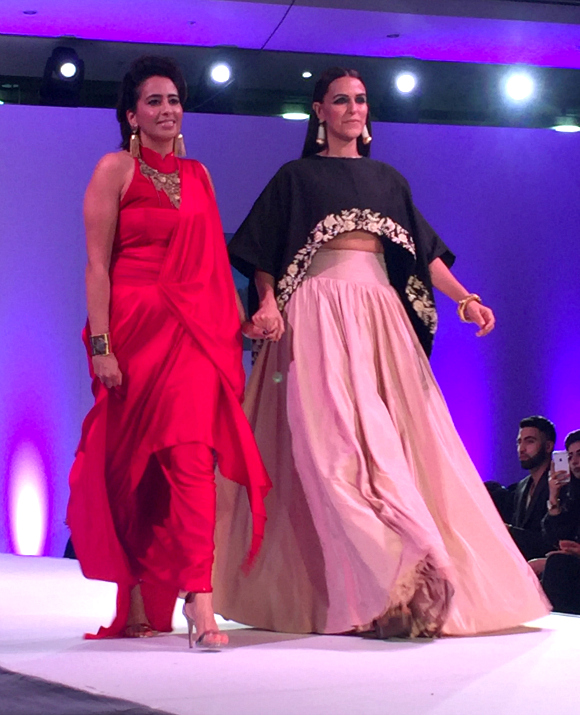 When asked about the one item she cannot go without, she said, laughing: “An oversized men’s white shirt from Gap! And it’s mine, not borrowed.”

“You don’t need to spend too much to look fashionable! All about carrying well!”

The catwalk was a selection of designers handpicked by Bibi London, a luxury multibrand store in London that stocks India’s leading designers.

The three designers at the VIP showcase were Pawan and Pranav, Neeta Lulla and Payal Singhal.

Marni Kaur, the owner of Bibi London explained why there is an increasing need for bringing luxury Indian brands to London:

“And finally now in London, they have that opportunity of buying those same products.” 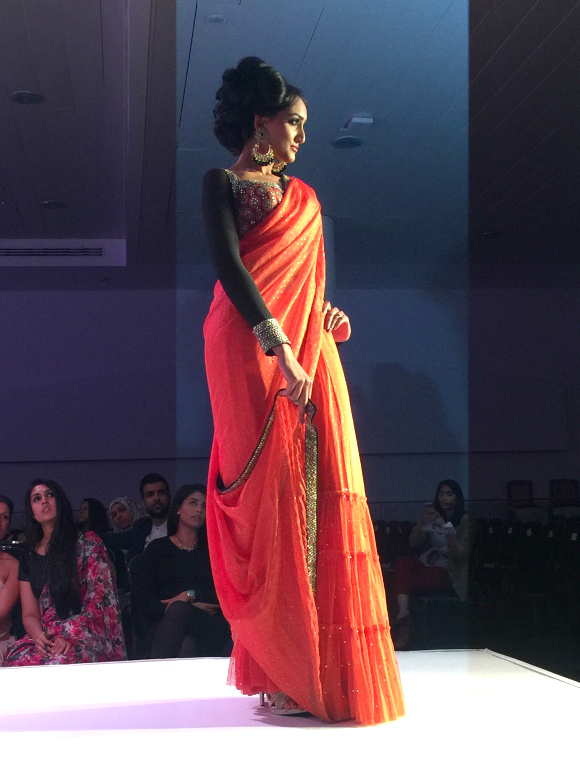 The rest of the weekend saw a mix of Indian and British Asian designers. IFWL welcomed both East and West on the runway, giving traditional garments a contemporary twist.

Day three also welcomed NEWGEN designers from the JD Institute of Fashion and Technology in India. 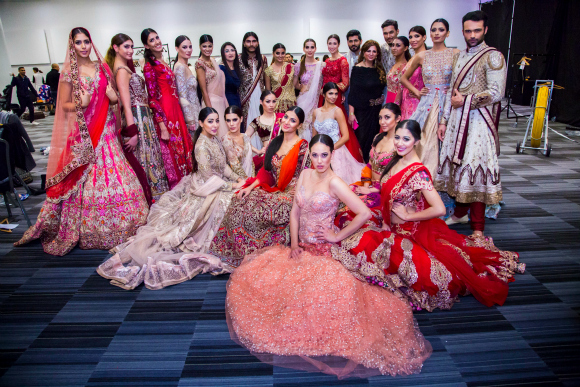 Director of the Institute, Mr Dalal, shared some interesting facts about the Indian Fashion industry:

“The Indian apparel industry is worth $40 billion and growing 13 per cent every year. It is great to see Indian designers getting a platform.”

Mr Dalal added: “This is a great opportunity for all the students of JD Institute to showcase their talent globally.”

The first NEWGEN designer was Saloni Ruia whose collection was inspired by the modern-day woman. Her designs included stone embellished capes and deep florals mixed with lace. 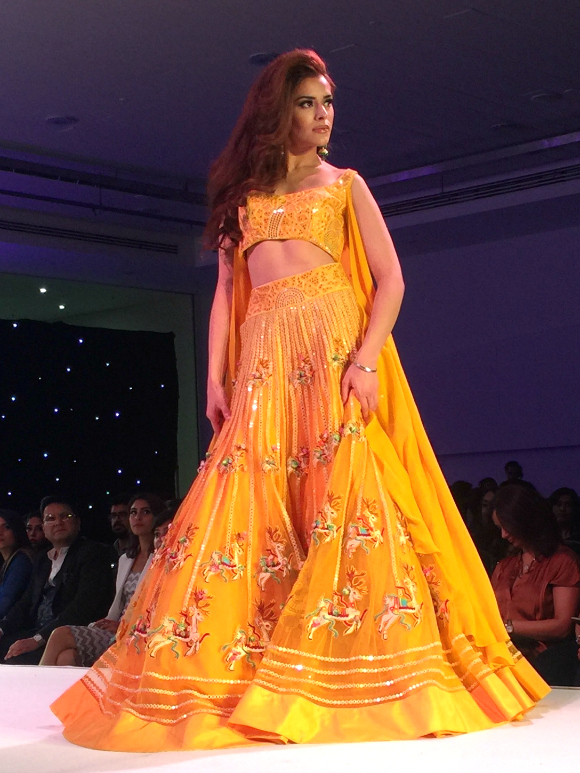 Her showstopper was worn by model and reality TV star, Arshina Trivedi. It was a cream gown delicately covered in vintage red roses and gold stitch work.

Finally, Anjali and Arjun Kapoor who launched their brand in the UK in June 2015, closed the show. Their collection saw ‘floral ornamentation’, which some breathtaking designs and prints. 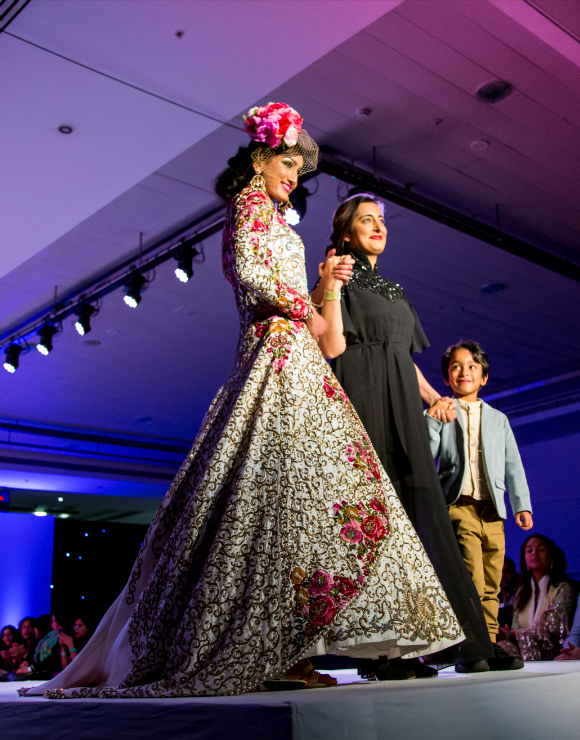 Director of IFWL, Mani Singh spoke about the inspiration behind the event, saying:

“It started off as an events company and then a wedding show that’s been going on from 10 years. However, we realised that access to designers is difficult until very recently.

“British Asians have the awareness of what is in India but want access of brands. Therefore we wanted to bridge the gap to encourage Indian designers to use the platform to showcase their collections as well as promoting British Asian talent.”

DESIblitz were excited to be part of this glamorous and trendsetting weekend. With this only being its inaugural year, it will be exciting to see what changes India Fashion Week London will bring in the future.

Sonika is a full-time medical student, Bollywood enthusiast and lover of life. Her passions are dancing, travelling, radio presenting, writing, fashion and socialising! “Life isn’t measured by the number of breaths taken but by moments that take our breath away.”
Kangana Ranaut is Regal at Paris Fashion Week
5 Must Have Winter Accessories for Women