Haider Zafar and Daniella Down talk Acting & The Conversations

DESIblitz chats to Haider Zafar and Daniella Down, stars of The Conversations. The British-Asian inspired dark comedy is available to watch on Amazon Prime.

"It’s an example of Indie filmmaking at its best, I think"

British Independent film, The Conversations, is a dark comedy set in the heart of London.

Co-directed by Marcus Flemmings and Haider Zafar, the film stars Haider in the lead role alongside Daniella Down.

The film can be described as a British rom-com with a twist. Haider plays Ali Nawab, a quirky dentist who dreams of being a successful stand-up comedian.

While his typically Desi family are keen to see him settled and married, Ali falls for Ellie Goldsmith (played by Daniella Down), an American blonde, who he meets at a local grocery store.

But sadly Ali’s love story ends too q for uickly and he attempts to erase his muse from his memory by whatever means necessary.

Lead actor, Haider Zafar explains: “The key themes in the film are dealing with mental health, overcoming heartbreak and acceptance of life as it is – All mixed in with a bit of fantasy sci-fi.”

The film has already garnered positive reviews after premiering in London’s West End. Now audiences can expect to watch it online on Amazon Prime from August, 31, 2016.

Watch the original trailer for The Conversations, played by lego characters here: 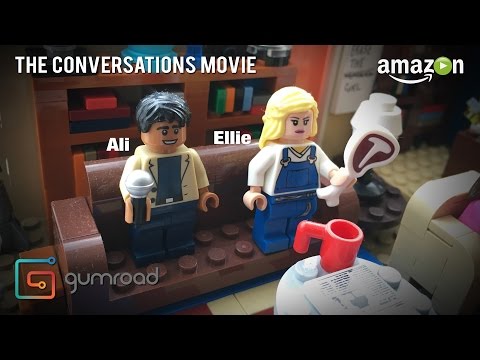 In an exclusive Gupshup with DESIblitz, stars of the film, Haider Zafar and Daniella Down tell us more about The Conversations.

Haider, Ali Nawaab’s role seems to be one which is torn between passion and profession. What more can you tell us about his character?

H: Ali is a complex individual that has reached a certain age feeling unaccomplished and somewhat bumbling along. He has grown up in contemporary Britain where he battles between his love for art (Stand-up) and commerce (Dentistry), which pays the bills.

He feels the pressure of external factors like family and friends expecting him to settle down and become like them, work a 9-5, buy a house, get married, have kids and so on. While he deep down does not deny this existence, he feels there is more in life to accomplish or strive for.

In the process of pursuing his dream of being a stand-up, he became cynical until the day he sets his eyes on Ellie. Love conquers all. 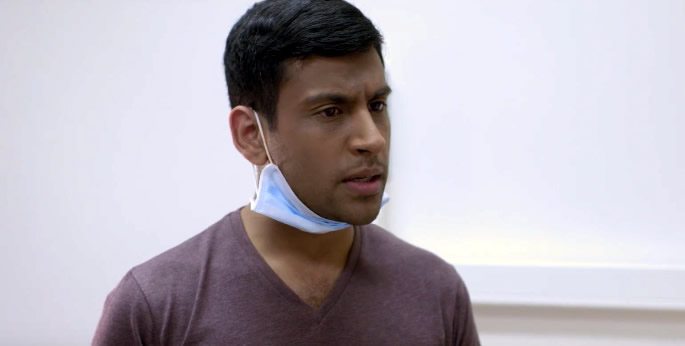 Daniella, what initially attracted you to the role of Ellie?

D: I’m all for quirky off-beat storytelling, which this script was. Right down my alley, and then to add that, here was a character that was adventurous (in a city not her own) and out to make the most of life, in her own strange way. Much like myself.

Your character seems quite promising. Could you tell us more about Ellie Goldsmith and how influential she is in Ali’s life?

D: I think we all know someone like Ellie, someone who is unaware of the huge impact they have on your life. I know I’ve known my own ‘Ellie’s’, they cause a tumultuous change in your life, and too often they out of your life again as quickly as they came.

It’s funny how sometimes it’s the people you least expect, or expect little from, that instigate the most change. That’s what draws Al, she’s the unassuming catalyst – or problem – depending how you look at it. She is involved in her own adventure-world, and doesn’t quite understand the effect she has on Al.

Ellie Goldsmith is American, what challenges does she undergo in adapting to the British lifestyle?

D: She’s not your typical American, she’s a flighty go getter out to discover everything the world can offer her. She assimilates easily into alien environments, she’s not lonely – but she’s good at being alone.

This is something I understand about her, I’ve had to be the chameleon every time I’ve moved country… which is a lot! It’s always a bit scary to adopt change – but that’s why people like Ellie move. They thrive on adventure. 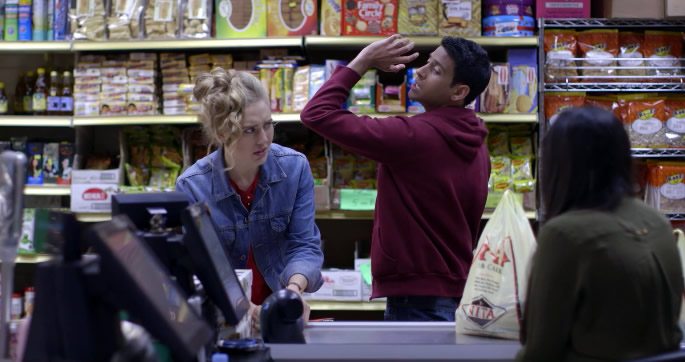 Haider, as actor and co-director of the film, which of the two did you find most challenging and why?

H: I was very excited in co-directing this project. Marcus gave myself a second pair of eyes, ears and mind to produce the best film we could with our limited budget. It also aided my lack of acting experience, I had only performed in shorts and promos as hobby.

“Holding an entire film was far more challenging than a few minutes of screen time – with the added stress of producing. Luckily Marcus and our actors were very accommodating when I would cheekily begin improvising my lines off script.”

How has your diverse film background helped you to prepare for the role in The Conversations?

H: The Conversations amalgamates a number of my experiences having had shot 13 Features as cinematographer.

Working with the various departments it allowed me to build a great network and access fantastic resource and crew.
The confidence built through these films helped get through making our first independent film on a micro budget.

Daniella, did you enjoy the shoot of the film, and how was it like working with Haider Zafar?

D: The Conversations was an unusual shoot in the sense we shot it over nearly a year, sporadically, in between all our other freelance jobs. We picked it up, shot for a few days, then picked it up again a month or so later. It was bitty, but enjoyable.

We all had the same goal – to make this film, tell this story – so we knuckled down and made it happen. No bells, no fanciful treatment, we just got it done. It’s an example of Indie filmmaking at its best, I think.

Even in the post production, I hear how they went against all the odds to get it finished and distributed – crew, cast and Marcus and Haider all acting like octopuses, doing a hundred jobs to get it to where it is now. Pretty awesome actually! 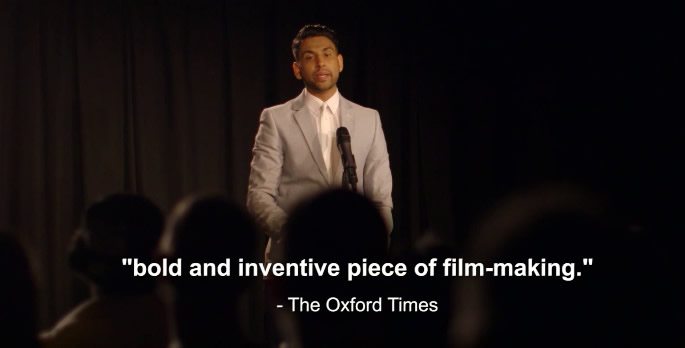 From a film perspective, how has your life changed in the last seven years?

D: Gosh, what a question! Well, I am never one to do things by the book… I don’t actually own ‘The Book’. I’m a bit of a jack of all trades and enjoy the challenge of doing things a little avant garde.

I moved from Hong Kong to London, where I worked on some films, then from London I made the move to Amsterdam – I’ve been fortunate enough to be writing regularly for various platforms, dabbling in voice overs again and even making films in the Nigerian film scene.

I love how chaotic my journeys been thus far, I hope it continues that way.

Dark comedies are quite popular in British-Asian Cinema. How do you think this film is different to others?

H: What makes The Conversations different to other British-Asian dark comedies is the honest place it derives from. Both Marcus and I have brought to screen what we ourselves have experienced as creatives.

I believe that Al represents the many men and women today, struggling between their professional work and ambitions of a higher purpose.

The Conversations is quirky. What moments of the film will make the audience laugh-out-loud?

H: One of our quirkiest moments is Al’s visit to a prospective bride’s home played by the wonderful Kubra Khan (Na Maloom Afraad). A not so engaged Ali and what appears to be the perfect girl are discussing hobbies and favourite films, just as Ali shows some interest – The audience discover both their families watching intensely.

D: The beat of the film is unlike anything I’ve seen in awhile, the heartbeat, it’s quirkier and more surreal, which make for a refreshing film. And, overarching it’s a very international film – it showcases the world how it really is, colourful.

With people from all different countries, backgrounds, skin colour, and whatever – but it’s not a film about that specifically, which is what’s so great- it just puts a spotlight on how the world is. Colourful, culturally diverse and utterly bonkers. 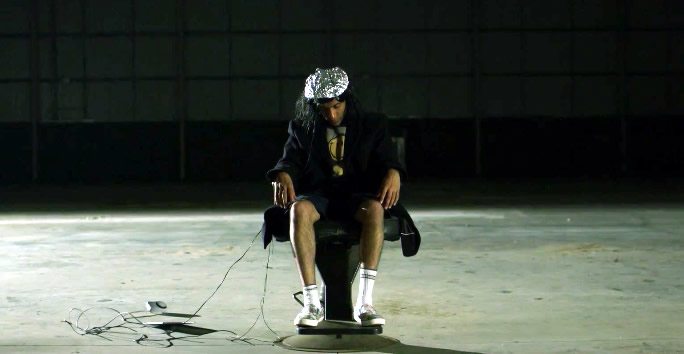 List three key points that will attract the audience to watch the film?

Haider, your final words on the film. What do you expect the audience will take away from the movie?

H: There has been a lot of ’talk’ about diversity and BAME in the media and that things need to change. We are yet to truly see this happen.

Our production has consciously brought together a diverse cast and crew and portrayed them in very non-stereotypical light. We wish to entertain our audience but also keen to challenge them with the ideas presented.

Watch the Amazon Prime trailer for The Conversations here: 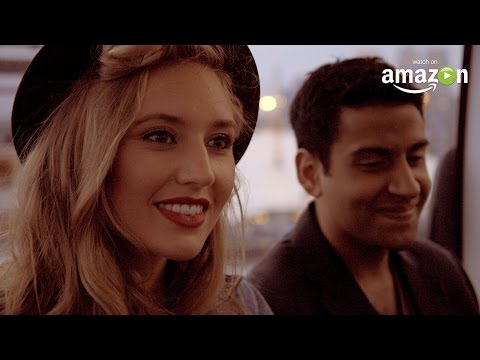 The Conversations is also the directorial debut of BAME filmmakers, Marcus Flemmings and Haider Zafar. Together Marcus and Haider are keen to promote ethnic diversity in the creative industry and media.

The Conversations is available to view on Amazon Prime from August 31, 2016.

Anuj is a journalism graduate. His passion is in Film, Television, dancing, acting and presenting. His ambition is to become a movie critic and host his own talk show. His motto is: "Believe you can and you're halfway there."
Salman Khan becomes Astronaut for Bigg Boss 10 Promo
Ae Dil Hai Mushkil unfolds Emotional Love