The Popularity of Graphic Novels and Manga in India

Many Indians are now choosing to read more graphic novels and manga in recent years. DESIblitz explores their growing popularity and presents the top favourites.

"Manga illustrations are very different from usual comics. The characters are rich in detail."

Many are well aware of the popularity of graphic novels and manga in the West. This love for alternative culture has now spread to South Asia, particularly in India.

Over recent years, young Indians are choosing to read both. Exploring their rich, diverse genres and characters.

While they may once have been seen as strange to read, India now embraces graphic novels and manga. But how have they discovered them?

For many, they would have first watched anime or superhero cartoons as children.

Particularly during the 1990s, cartoon channels began showcasing several Japanese animes or superhero shows to its young audience. Sparking a new fanbase in the country.

A love for anime and superheroes has now led to a similar story for graphic novels and mangas. Sagar, a university student, told Times of India:

“I used to watch animes. When I did further research into the ones I liked, I found that animes were based on manga. I stopped watching anime after I started reading manga as they were always ahead.”

In addition, some may become introduced to them through comics. Comics are nothing new to India, as they were first launched in 1967.

However, graphic novels go beyond the story of the child-friendly superhero. They often explore mature topics, even containing darker and realistic material. Some illustrators have even crafted Indian graphic novels, showing its growing market.

“One picture can convey what a hundred words can fail to. You will be stunned to discover the depth and volume that both comics and graphic novels offer.”

Social media expert Desmond Fernandez also believes the same for manga and told Times of India: “Manga illustrations are very different from usual comics. The characters are rich in detail and there’s a lot more drama to it.

“It offers a cinematic experience. It’s different from the usual superhero comics that you read, and has a unique appeal.”

Let’s then take a look at some of the most popular graphic novels and manga in India. Which have you read from these lists? 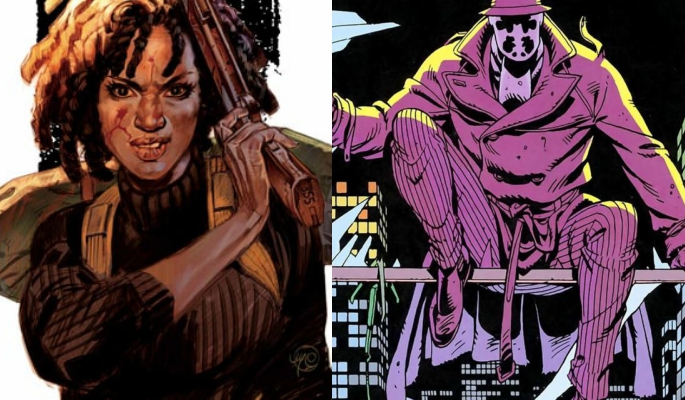 Watchmen (Alan Moore) ~ One of the greatest graphic novels, Watchmen sparked a new age of the superhero. Set in an alternate universe of the Cold War, it explores a band of retired superheroes investigating the death of one of their comrades.

Presenting iconic characters such as the brutal Rorschach and powerful yet detached Dr Manhatten, it challenges moralities as the Watchmen uncover a complex conspiracy.

Batman: The Killing Joke (Alan Moore) ~ This focuses on Batman’s greatest nemesis: The Joker. It marks a new take on the character, introducing his most-recognised origins – a failed comedian who eventually falls into a vat of chemical, which alters his appearance and is the breaking point of his sanity.

Batman has to save Commissioner Gordon from the Joker’s twisted scheme. Altogether, The Killing Joke is one of DC’s celebrated and psychological graphic novels.

But when colour is used, for sadistic Roark Junior’s vivid, yellow skin and Ava Lord’s ruby-red lips, it makes a striking impact.

Y: The Last Man (Brian K. Vaughan and Pia Guerra) ~ Set against a post-apocalyptic world, it follows Yorick Brown who is the only male human on Earth after all men and male animals mysteriously die, save his pet monkey.

Despite its male protagonist, the novel heavily explores a world with dominating female presence as they embrace an age without patriarchy. 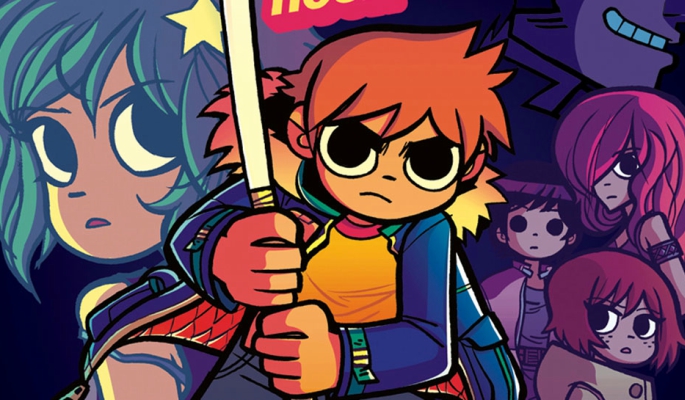 Scott Pilgrim (Bryan Lee O’Malley) ~ Scott, a young musician, falls head over heels for a delivery girl named Ramona and is keen to date her. The catch? He has to defeat all seven of her exes.

With a bold, cartoon style, it feels reminiscent of mangas, especially in battle sequences. Yet, as it draws influence from both the West and Japan, it hails as a unique piece of work.

Transmetropolitan (Warren Ellis) ~ Exploring a futuristic world of cyberpunk, Transmetropolitan follows journalist Spider Jerusalem as he battles against the dystopic rule of two US presidents.

Highlighting the corruption power and fame can bring, the novel ran from 1997 to 2002.

The Sandman (Neil Gaiman) ~ A blend of horror, history and mythology creates a superb story within The Sandman. It explores how its titular character, also known as Morpheus, eventually becomes captured.

Known for its use of anthropomorphic personification, The Sandman is another classic graphic novel.

The Arrival (Shaun Tan) ~ Unique in its omission of words, The Arrival tells its story all through sepia-toned imagery. Tan’s inspiration hails from many children’s books, where they aim to portray story and detail in their pictures.

The graphic novel depicts a father travelling to a new land as a refugee – a thoroughly emotional tale. 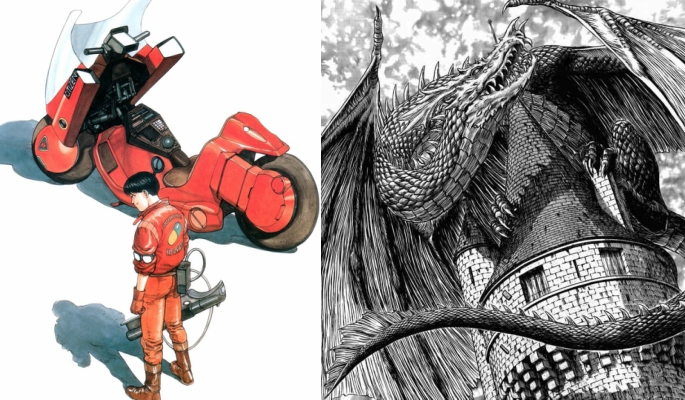 Berserk (Kentaro Miura) ~ First beginning in 1989, the manga is set in a medieval period that continually questions the boundaries of good and evil within humanity.

Following the characters of Guts, a mercenary, and Griffin, a leader of mercenaries, it is rich with complex, highly detailed artwork.

It explores many philosophical and sociological issues centred around technology and its rapid advancement.

Death Note (Tsugumi Ohba) ~ One of the most celebrated manga of the 2000s, Death Note follows Light, a student who finds a supernatural book owned by a Shinigami named Ryuk. The notebook gives him the power to kill anyone, providing he knows their name and face.

As he embarks on a murder spree as ‘Kira’, Light becomes embroiled in an intense cat-and-mouse battle with L, a mysertious detective. A tale that continues to grip both old and new fans.

Attack on Titan (Hajime Isayama) ~ Attack on Titan sees humans living in cities enclosed in enormous walls, to protect from the deadly Titans – giants who eat people for an unknown reason.

Three youngsters join the military, who protect civilians from these enemies. With thrilling action and the truth slowly revealed, this manga is a must-read! 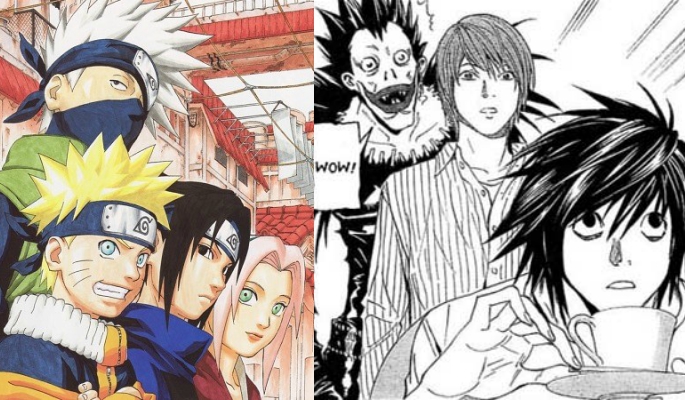 Akira (Katsuhiro Otomo) ~ A cyberpunk manga, Akira was one of the first full series to be translated from Japanese. Set in a post-apocalyptic Neo-Tokyo, a military group threatens the city when they turn a biker gang member into a vicious psychopath.

However, a group of psychics, including the mysterious Akira, can only stop him.

One-Punch Man (ONE) ~ Beginning life as a webcomic series, One-Punch Man became an instant hit amongst its global audience, surpassing 7.1 million hits in 2012.

The titular character, also known as Saitama, is a superhero with incredible powers, defeating enemies with a single punch. But growing tired of his powers, he attempts to find an opponent worthy to fight.

Naruto (Masashi Kishimoto) ~ Arguably one of the most well-known manga series, even to those unfamiliar. It follows young ninja Naruto Uzumaki, who dreams of becoming the Hokage, a leader in his village.

With a cast of memorable characters, it eventually became the third highest-selling manga in history. A truly iconic series to read.

With this crew, he travels the seas, searching for the treasure known as ‘One Piece’. With this, he hopes to become the next Pirate King.

These are just a handful of graphic novels and manga series for you to discover. However, there are much more to pursue, with the industry thriving in its popularity.

In years to come, one hopes to see more diversity within this literature. Not just in the characters they portray, but writers from different backgrounds such as South Asia.

But while manga grows popular in India, so too does anime, particularly amongst British Asians. Find out more about their love for anime here.

Is Virtual Reality the Future of Bollywood?
WHO classifies Gaming Addiction as a Health Disorder