Cricketer Glenn Maxwell is marrying his fiancee Vini Raman in March 2022. This comes after their Tamil wedding invitation went viral.

"a mark of respect and tribute to the Tamil/Vaishnavite culture"

Australian cricketer Glenn Maxwell is getting married to Vini Raman on March 27, 2022.

The invitation prompted media speculation that the couple will have a Tamil wedding in Melbourne.

But Vini’s cousin, Nandhini Sathyamurthy, dismissed the rumours, stating that the couple will actually be having a traditional Hindu ceremony.

In a Twitter thread, Nandhini said Glenn and Vini will have a Hindu wedding.

But she clarified that having a “Hindu ritual based” wedding “does not in any way indicate her ancestry/roots from Murthy street in West Mambalam, going by the media speculations”.

Nandhini continued: “Neither is she from an Iyengar family, based off from Chennai, as per the other speculations that is doing rounds.

“The Tambrahm style invitation made by her parents is a mark of respect and tribute to the Tamil/Vaishnavite culture they are deeply rooted to.” 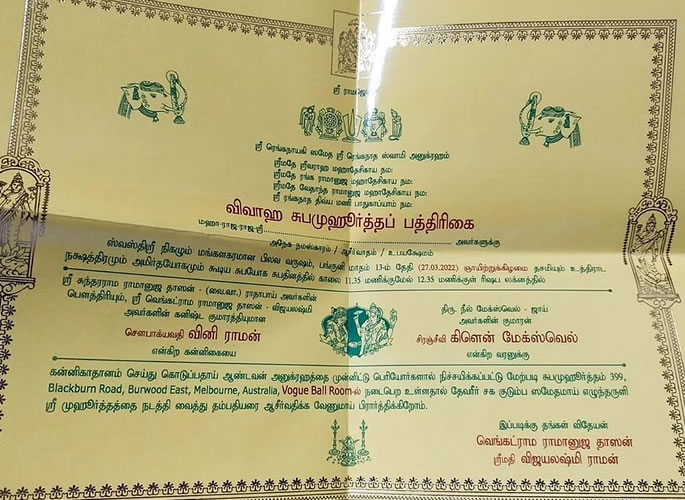 Nandhini added: “How do I know all of this?

“Vini’s mother is my chitthi (my mom’s younger sister), and they all lived together and shared a deep bond as a family with multiple siblings before being married and moving out of their parental home.”

She went on to ask people to respect the couple’s choices.

“Finally, finally, finally – it’s her life and her family’s moments of celebrations, and so, can we all just stop dishing out so much spite, malice and contempt?

“They can choose to celebrate Vini’s wedding in whatever way they’d like.”

“I know I can mooditu pogalaam. Still, the amount of curiosity around their invites is so ridiculous that I thought I’d jump in and talk about what’s going on here, anyways!”

Vini Raman is based in Melbourne and works as a pharmacist.

The couple have been in a relationship since 2017.

In October 2019, Glenn Maxwell announced he would be taking a break from cricket due to mental health issues.

He later revealed that Vini was the first to notice his mental health struggles and was his main support during his break.

He said: “I was pretty mentally and physically ruined from eight months on the road and living out of a suitcase.

“That had probably been going on for four or five years.

“My girlfriend was number one (support). It probably wasn’t an easy job for her to deal with me going through mood swings non-stop for the first few weeks.”

Dhiren is a journalism graduate with a passion for gaming, watching films and sports. He also enjoys cooking from time to time. His motto is to “Live life one day at a time.”
The Results of the 2022 IPL Auction
Glenn Maxwell to Marry Vini Raman but Who is She?