"So adorable and made this wedding very special"

The pair officially married on March 18, 2022, in Melbourne. Around 350 guests attended the ceremony.

They later conducted an Indian ceremony in Chennai to honour Vini’s heritage and footage has gone viral.

In the video, Glenn is wearing a cream sherwani while pharmacist Vini sports a red lehenga.

The couple are seen exchanging garlands and playfully dancing during the ‘Varmala’ ceremony.

Meanwhile, guests stand around the couple and clap as the ceremony goes on.

Footage of the moment went viral and viewers took to social media to express their thoughts.

From Maxwell's wedding ???
Congratulations to this beautiful couple ?? pic.twitter.com/z6vIEuiwja

One user said: “So adorable and made this wedding very special for everyone.

“Best wishes and wishing you the happiest married life ever.”

Another joked: “Now Maxi is half Indian.”

“All the pictures and videos from Maxwell’s wedding are so wholesome.”

“He probably doesn’t even understand half the traditions but doing all of them with a full heart just because of her.”

Vini had previously shared pictures of their mehendi ceremony which included a photo of the couple with their parents. 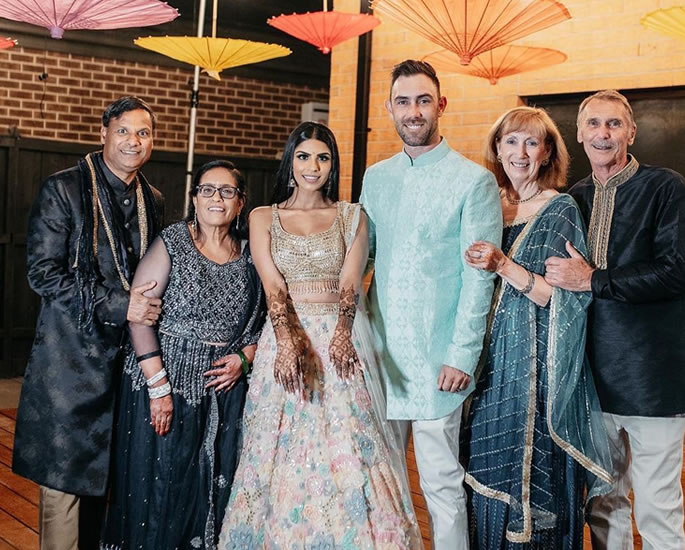 News of their wedding came to light after a photo of their Tamil-style wedding invitation went viral.

The couple have been in a relationship since 2017 and got engaged in 2020 just before the Covid-19 pandemic.

Glenn Maxwell previously revealed that his initial proposal plan fell through and admitted that the experience was more nerve-racking than a World Cup Final.

He said he planned to propose in a park but “we went for a walk and everything felt so wrong”.

Glenn Maxwell is currently sitting out Australia’s tour of Pakistan, where he was expected to play the limited overs leg.

He is also missing the first few games of the Indian Premier League (IPL), in which he was retained by the Royal Challengers Bangalore.

RCB faced the Punjab Kings on March 18 in their first match of the season.

New captain Faf du Plessis scored 88 off 57 while Virat Kohli scored 41 off 29 as RCB scored 205/2 after being invited to bat first. However, they went on to lose the match with Punjab chasing the target down with five wickets and an over to spare.

Glenn Maxwell is expected to join up with the team in a few days.

Dhiren is a journalism graduate with a passion for gaming, watching films and sports. He also enjoys cooking from time to time. His motto is to “Live life one day at a time.”
Weightlifter Saikhom Mirabai Chanu wins BBC ISWOTY Award
7 Top Indian Powerlifters who Made their Mark in the Sport