Despite the negative associations with graffiti, it is, in fact, an incredible art form which is prevalent in Pakistan. Let’s explore the pioneers.

"It took a lot of hard work and dedication to evolve."

Graffiti artwork is a rather underrated phenomenon which is stereotypically associated with the street scene.

With this comes the negative reputation of vandalism, violence and brutality.

Despite these conventional beliefs, graffiti is an expressive form of art which allows the artist to illustrate their vision and emotions.

Pakistani art has been confined to particular domains like Mughal art and calligraphy just to name a few.

Yet, what many people are unaware of is the rise of graffiti art as symbolic representations in a country where artists are motivated to strive for success and recognition.

Undoubtedly, the art scene is vast in Pakistan. However, Pakistani graffiti artists are pushing their way forward and are a force to be reckoned with.

We explore Pakistani graffiti artists who have made their mark in the field. 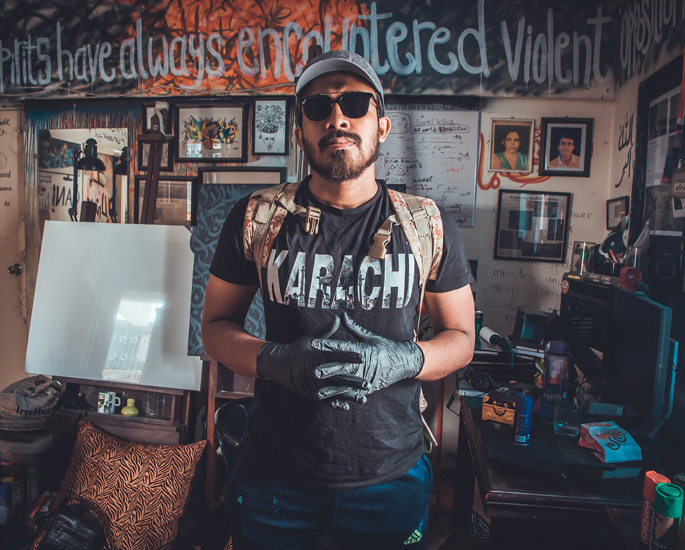 Sanki began his professional career as an artist by selling his artwork in 2011 and has never looked back.

In fact, he is a self-taught artist who used to immerse himself in the arts to keep himself occupied after the demise of his mother at the age of eight.

Not only that, but his father and art teacher encouraged him to pursue his passion for art.

Sanki has numerous credits to his name. In July 2012, he did his first-ever live graffiti art and within the same month launched his Sticker Art Movement.

His designs featured the founder of Pakistan, Muhammad Ali Jinnah.

Sanki’s graffiti art has transcended borders and this became obvious when he was invited to overseas graffiti crews Beyond Mankind Krew in New York and Experienced Vandals in Brooklyn.

Not only that, but he was also chosen to be a judge for nationwide graffiti competition which was hosted across seven cities. 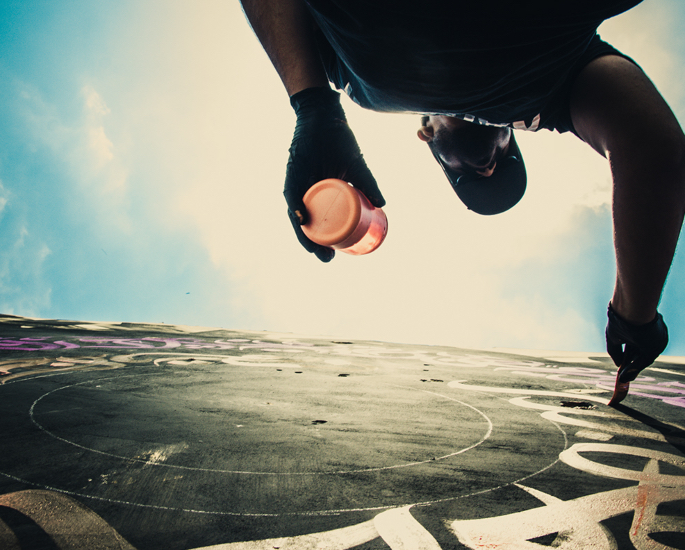 Some of Sanki King’s popular works include:

His amazing creation can also be seen in various regions including Nazimabad, North Nazimabad, Clifton and Zamzama.

He even held his first solo exhibition, ‘You Should Know Him by Now’ on June 4 2016.

Interestingly, Sanki’s work also featured in Nicholas Ganz’s book, ‘Street Messages’ amongst 80-85 other artists from across the world including the renowned Banksy.

As well as his exceptional graffiti art, Sanki has also collaborated with The House of Arsalan Iqbal after he was asked to paint the brand’s shutter in Zamzama in 2012.

This led to their collaboration in 2014 for the Desirably Distressed collection, in which Sanki’s designs were used on denim clothing.

Their partnership was then extended in 2015 to another collection of footwear and jewellery which again featured Sanki’s designs.

Sanki King proves graffiti is not only a form of ‘vandalism’ rather it is an expressive art form which successful depicts a message.

His paintbrush is a spray can and he has redefined street culture in Pakistan. 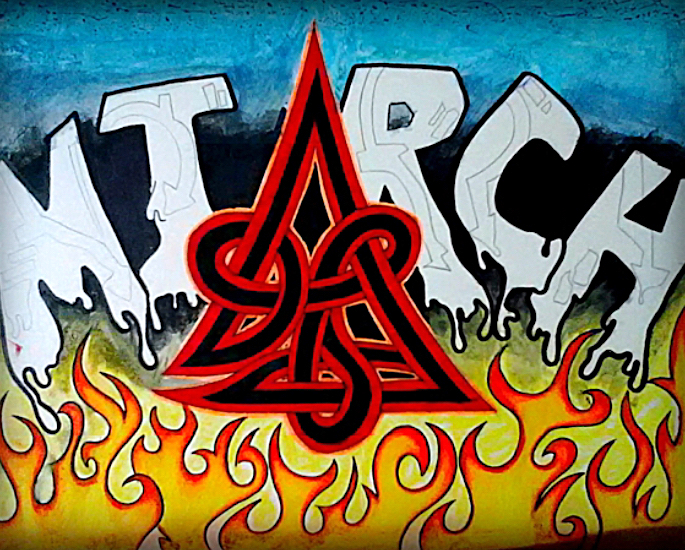 Known as the first female Pakistani graffiti artist, Annie Ajaz born as Qurat-ul-Ain Ajaz, broke the conservative mould in society with her graffiti art at the young age of 17.

Typically, the street atmosphere is not considered suitable for women in Pakistan. She said:

“Usually women are not appreciated or encouraged to do these kinds of art.”

However, Annie pursued her passion for art and refused to let it be deflated.

According to an interaction with Business Recorder, Annie revealed that her art journey began at the tender age of 8-years-old.

She would draw landscapes, animals and human faces.

However, her journey with pencil drawings came to an end because it did not fit in with her parents’ belief.

Instead, Annie resorted to discovering graffiti art as she refused to allow her passion and aspirations to be diminished.

Despite her family’s reservations about graffiti art, Annie successfully used this art medium to beautifully express herself.

Regardless of their reservations, her family supported her passion saying:

“My parents fully support me and my father is always with me in every project.”

In fact, Annie took inspiration from other male artists. She explained:

“I started copying artwork of others and learnt it quickly and my first work appeared last September (2014).”

Annie’s artwork can be identified by the tag name ‘Mirch’.

Annie has displayed her graffiti work at four exhibitions within the first two years of gaining recognition.

Debuting at the Annual Carnival of Karachi University in September 2014, Annie went on to show her work at Karachi Arts Council in December 2014.

Her work was then displayed at CBM University as part of a street cleaning project in December 2014 and at BOTS in February 2015.

The beauty of her graffiti work lies in representing urban society with a rural touch.

She also continues to dismantle the perceived notion of a violence-stricken nation through her expressive art form. 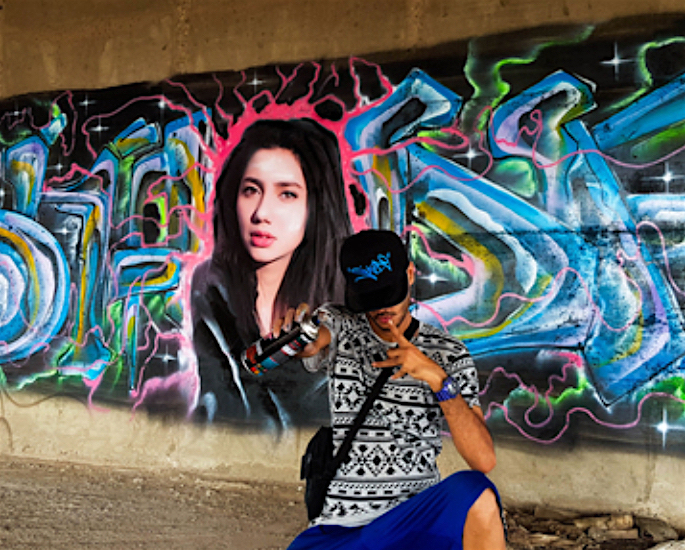 Karachi-based graffiti artist, Neil Uchong who goes by the pseudonym Mr Shade became familiar with the urban scene through parkour and b-boying.

This paved way for his initial graffiti which consisted of shoe prints on walls from back-flipping.

Neil Uchong who has been active for over 20 years decided to later reveal his identity in order to inspire motivate and help create a platform for aspiring artists in Pakistan.

In 2007, Neil Uchong joined an international graffiti crew. He utilised this opportunity to further promote the Arts in Pakistan.

This allowed him to evoke the sole essence of graffiti.

He has also featured in notable events including Meeting of Styles in the US and Street Nights in the UAE.

Meanwhile, in Pakistan, his tremendous graffiti work can be seen in numerous areas breathing life and colour into the landscape.

One of his most famous pieces of art is the Mahira Khan mural. Another one is the colourful graffiti backdrop displayed in Baaji’s song Lucky Star Chowrangi’s makeover.

Furthermore, hid graffiti work can be found at restaurants such as Big Thick Burgerz, D’alma, Pinch & Co and many more.

You cannot help but stop and stare at Neil Uchongs enticing artwork. 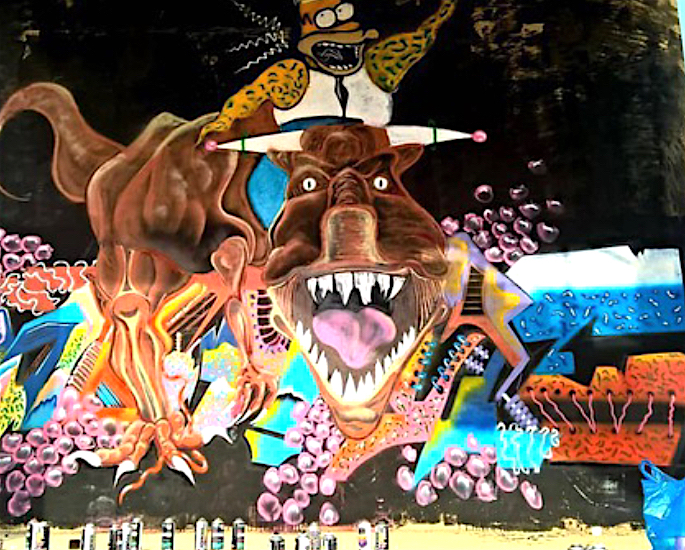 Speaking to Karvan, Uchong revealed what motivated him to get into the arts. He said:

“At a young age, marking walls was a way of communicating emotions while still maintaining the privacy of the feelings.

“What started as plain writing and tags turned to evolved pieces and productions.

“Obviously, no one is born with a skill implanted in them and it took a lot of hard work and dedication to evolve.

“The major influence of getting involved with large productions came from a tour to Sydney, Australia in 2004.

“This was where inspiration was taken by witnessing train tracks and alleys loaded with graffiti of different hand styles.”

Neil Uchong was also able to share the graffiti art form in a different art medium.

He displayed his graffiti collection with SPLASH at the Pakistan Fashion Week Fall 2019. 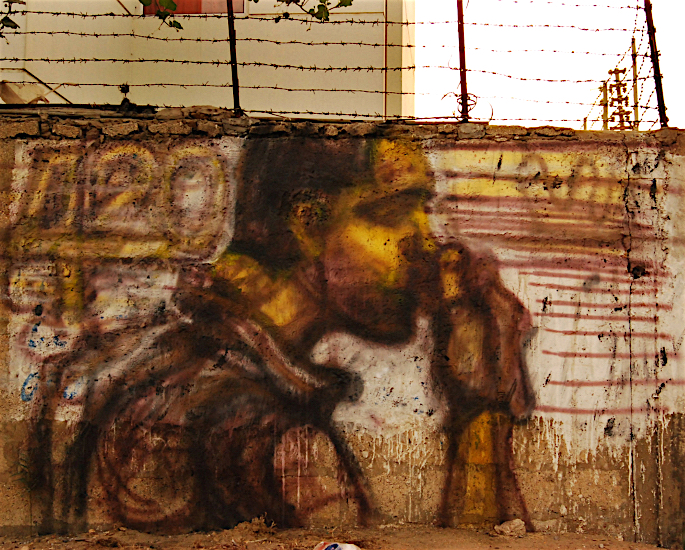 Asim Butt (1978-2010) is synonymous with graffiti art in Pakistan. His work continues to inspire many upcoming artists.

Born in Karachi Pakistan, Asim began his artistic journey at a young age.

Despite being encouraged to pursue Social Sciences at College and then going onto a PhD in History, he dropped out two years later.

This was because he took part at the San Francisco Arts Commission Gallery in March 2002.

This led him to pursue a B.F.A. in Painting in Karachi.

Some of his well-known work consists of the two murals painted in the area surrounding the shrine of the 8th century Sufi saint Abdullah Shah Ghazi.

Another one of his renowned works is based on America’s Shock and Awe campaign in Iraq.

He is also known as the founder of Karachi’s Stuckist art movement which opposed conceptual art and promoted figurative painting. 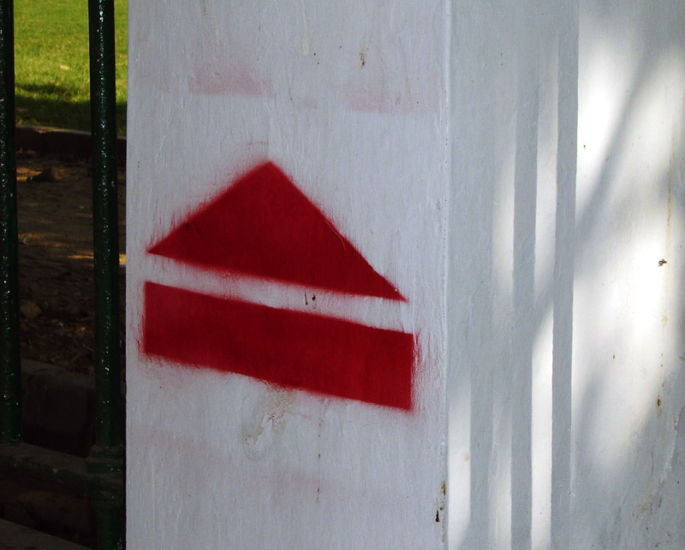 In addition, Asim Butt used his artwork as a political stance. For example, in November 2007, he started an artistic movement in which he sprayed an ‘eject’ symbol using a stencil.

Consisting of a red triangle over a red rectangle, the ‘eject’ symbol can be found across Karachi.

Asim Butt also identified his sexuality as “gay” and explored themes of masculinity, sex and gender in his artwork.

Despite his great contribution to graffiti art, he reportedly tragically committed suicide on 15 January 2010 at the age of 31.

In his short life span, he was able to significantly impact art in Pakistan and is remember for the same.

There is no doubt Pakistani graffiti artists deserve more mainstream recognition as their artwork speaks volumes.

Pakistan is a colourful nation and graffiti artists contribute to the wonder, splendour and overall beauty of the nation through their work.

Ayesha is an English graduate with an aesthetic eye. Her fascination lies in sports, fashion and beauty. Also, she does not shy away from controversial subjects. Her motto is: “no two days are the same, that is what makes life worth living.”
The Lack of British Asians Studying the Arts
10 Best Indian Cave Paintings