The Evolution of Graffiti & Street Art in South India

Graffiti is an art form that is becoming legitimate worldwide, and its evolution in South India has even changed lives.

"Graffiti is ultimately a call out to the public, saying that I exist."

Internationally, graffiti is an art form that has brought commercial success to its artists, but it is only taking baby steps in India.

In recent times, street art and graffiti in India have brightened cities, transformed neighbourhoods, and brought communities together.

However, they are still largely considered “anti-art”, despite slowly finding a mainstream place.

Initially, graffiti and certain forms of street art were considered acts of vandalism. Today, things have not changed much.

Graffiti are assertions of identity or calls for attention to issues.

They are considered an anti-establishment expression in different countries, like the US.

This is because public walls should be kept pristine and cannot be used for posters or signage.

In India, people are already used to defacement, seeing walls splattered with political parties’ peeling stickers and much more.

Consequently, the element of shock or discomfort that is so essential to graffiti is non-existent in India.

“When I painted my first wall without any permission, I waited for the day when it would make it to the news.

“When my work started getting featured on the news, I decided I wanted to sell my paintings… Tomorrow, the doors open for my solo exhibition, and I have nothing more to strike off now.”

His exhibit brings street art into a white cube space, shining light that it is nothing less than ‘high’ or ‘fine’ art.

Tyler opens up by saying: “I paint what I am.

“Everything I had done as a mischievous kid reflects my art when I look at it now.”

About a year ago, Chennai’s Kannagi Nagar, one of India’s largest resettlement housing areas, saw a dramatic transformation thanks to 16 artists who etched murals on several walls aiming to make Kannagi Nagar a public art destination.

The Kannagi Art District is an initiative led by the Asian Paints and St+art India Foundation to bring the community together. 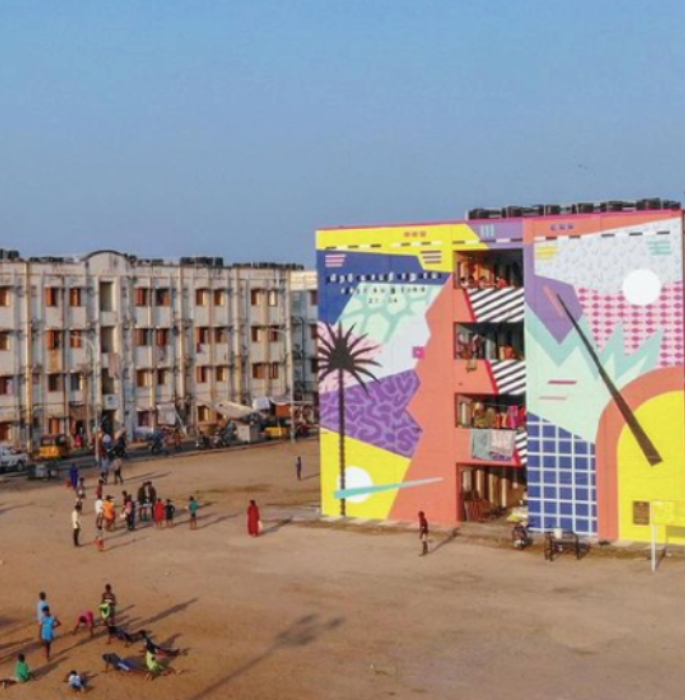 The first wave of residents started in 2000 when people from slums across Chennai were moved there.

In 2010 after the Tsunami caused many victims, those who survived were packed off here.

Due to the high poverty levels, thenewsminute.com has reported more than 150 listed criminals in the area.

Turning Kannagi Nagar into an art district has transformed the area into a more socially acceptable space.

St+art India is a non-profit organisation that collaborates with governing authorities to take art out of galleries into the public space in various Indian locations. 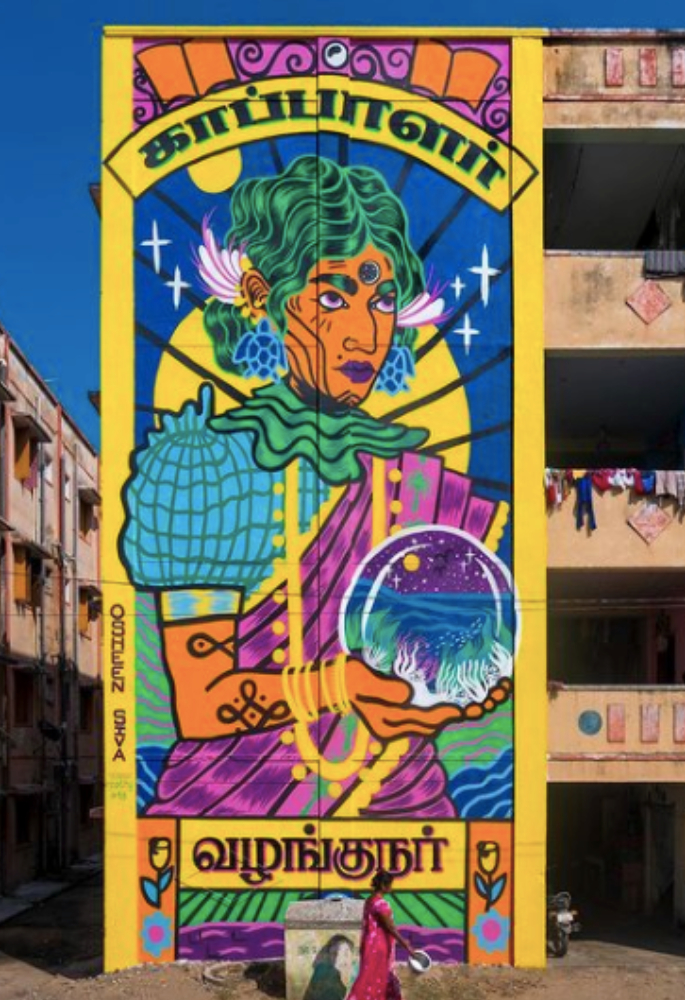 “First, the facades are beautiful. Second, there are so many that it has the potential for us to create the largest art district in the country.

“And finally, before this project started, if you google Kannagi Nagar, you have pages and pages of news reports on crime, people getting stabbed, dismal poverty levels, and violence of some kind or the other.

“Unemployment is exploding here, and when people from the area apply for jobs, they’re rejected because of the reputation of their address.

“It’s a vicious cycle. So in our own way, we’re hoping to help change the public image of this locality.”

Famous Kochi-based anonymous artist, Guess Who, who is considered as India’s Banksy, asks:

“Isn’t that the beauty of it? It demystifies the aura around art and makes it approachable for everyone.”

In graffiti, self-expression takes precedence, and it is a form of narcissism. Whilst, street art relies heavily on a narrative.

A-Kill further adds: “Graffiti is ultimately a call out to the public, saying that I exist.”

In Kerala, political writing on public walls seems to be the starting point for street art.

On what concerns political graffiti, Guess Who adds:

“You wouldn’t call it graffiti, but their distinctive styles of hand-painted letters have a lot of characteristics that are similar to graffiti culture.

“Unfortunately, there isn’t much of an individual artistic expression.”

An overtly political view of graffiti is not quite popular.

Several artists blame fellow political graffiti artists for “looking at problems” instead of “trying to see the great work that is happening.”

They are not totally wrong, as there is plenty of amazing work in the non-political space of street art.