The Mumbai film industry offers a platform for young stars. We list the most famous celebrities who started off as Bollywood child artists.

"Ma, when I grow up. I'll become vagabound too."

Some of these Bollywood celebrities who made it big in the industry started as child artists during the 40s. Others made their entry as Bollywood child artists between the mid-60s and early 80s.

Eminent filmmakers such as Raj Kapoor had a big hand in providing a platform for such young acting talent, identifying them as future stars.

We showcase the very best crafted stars from Mumbai who initially appeared as Bollywood child artists. 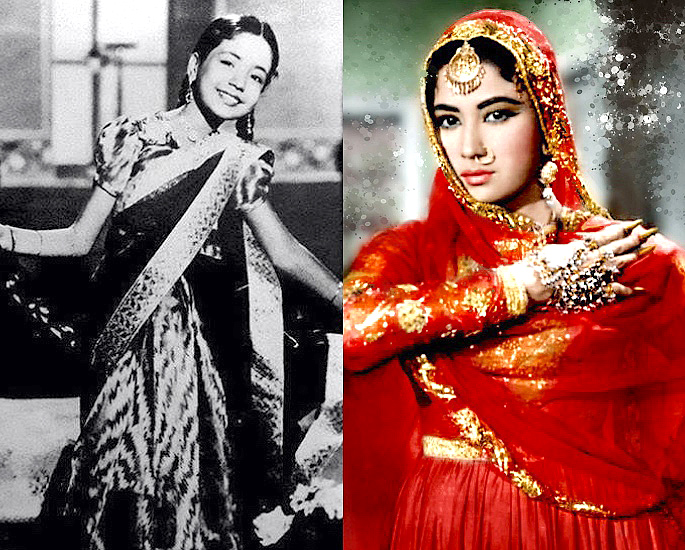 Meena Kumari aka Mahjabeen Bano was one of the earliest Bollywood child artists.

It was during the social drama film, Ek Hi Bhool (1940) that director Vijay Bhatt gave her the name Baby Meena. She was only around six or seven years old during the shooting of this film.

Bahen (1941) was a successful collaboration between Meena Kumari and director Mehboob Khan. This was the only time the two came together to work in a film.

She had a fruitful career, spanning more than thirty-three years, featuring in over ninety films. 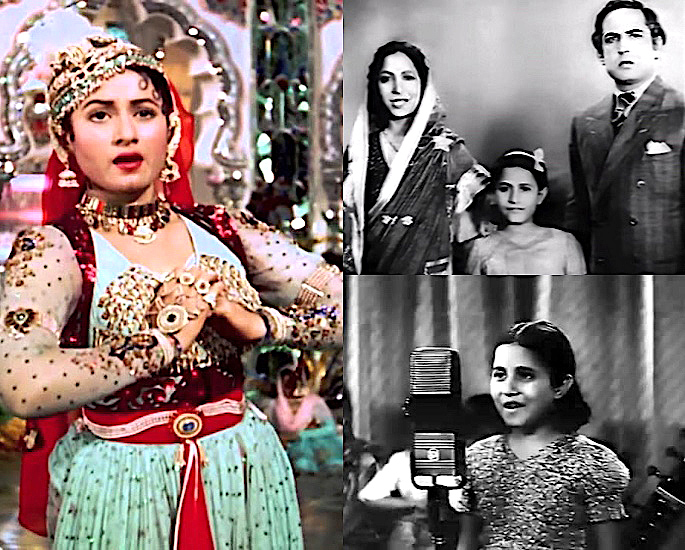 Madhubala who was born Mumtaz Jehan Begum Dehlavi had a child artist career from 1942-1947.

Known as Baby Mumtaz, she was uncredited as Manju in the romantic-musical Basant (1942). She plays the daughter of Uma (Mumtaz Shanti) in the film.

After Uma marries the devious Ulhas (Nirmal), she and Manju are left to starve. This was the highest-grossing film of 1942.

She came in many other films as Baby Mumtaz. These include Mumtaz Mahal (1944) and Phoolwari (1946). The latter being the highest grosser for 1946.

As a child artist, Rajputani was her final film. Madhubala went onto have a flourishing career as an adult. 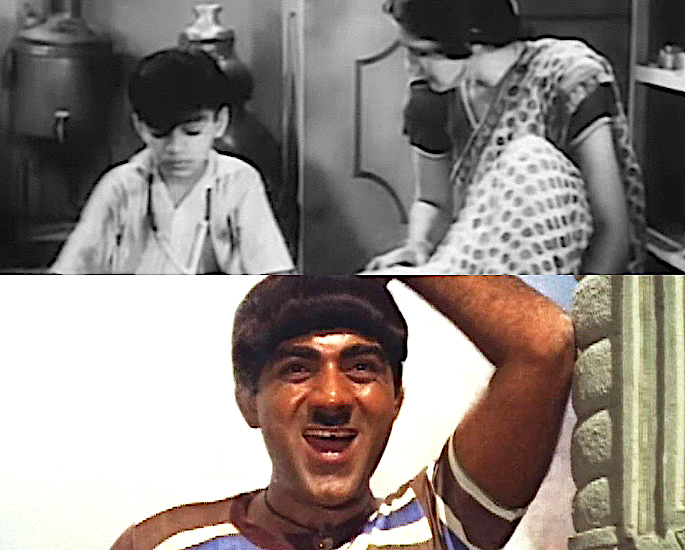 Mehmood was an all-time great comedian and one of the first male Bollywood child artists.

He plays the young version of Ashok Kumar in the Indian drama Kismet (1943). In a scene, playing Madan, he starts arguing with his mother whilst eating. Madan questions his mother, saying:

“You are not my mother, not my real mother.”

When Madan repeats the same to his dad, he pulls him from the ear. He clips him on his head too.

Madan’s mother comes to his defence, Madan’s father tells his wife that she has spoiled Madan. He then asks him to leave the house.

The scene ends with Madan leaving the house and his mother calling his name. Madan briefly looks back but continues walking on.

Mehmood went on to have an illustrious career often playing comedy in his films. His roles in Gumnaam (1965) and Padosan (1968) and are amongst his most memorable.

Ironically, Mehmood had the chance to work alongside Ashok Kumar in the film Do Phool (1973). 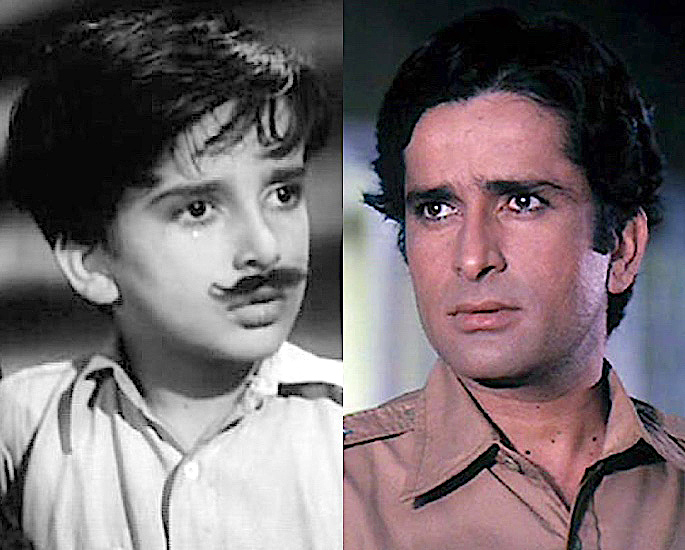 Shashi Kapoor who came in big movies like Deewar (1975) began his Bollywood film career initially as a child actor.

He had his first child artist appearance in the musical drama Aag (1948) made by elder brother Raj Kapoor.

Shashi takes on the young Kenwal Khanna role in the film. His character has an obsession with theatre, despite coming from a legal family background.

At school, he takes a liking for Nimmi (Nargis) who also enjoys theatre.

Whilst enjoying a school drama, he shares his dream of establishing a theatre, with Nimmi playing the lead role alongside him for a play.

But as Kenwal prepares to stage a play, Nimmi leaves him in the lurch. A young Kenwal takes Nimmi’s absence to heart.

Two years later, Shashi went on to play young Kunwar in Sangram (1950). Kunwar is a spoilt child of a police officer.

His father spoils him so much that he finds himself getting well-known amongst thugs and gambling.

In a state of fury, he also fires his father’s gun at a close friend.

His other noteworthy role was again in Raj Kapoor’s crime drama Awara (1951), playing the young Raj – the son of his real-life father, Judge Raghunath (Prithviraj Kapoor).

Viewers witness Raj and his mother Leela Raghunath (Leela Chitnis) being abandoned by his father. Whilst living in poverty with his mother, he also makes friends with Rita (Baby Zubeida) at school.

“Ma, when I grow up. I’ll become vagabound too.”

After being expelled from school for doing a side business, Raj comes under the wing of criminal Jagga (KN Singh). This dramatically changes his life. 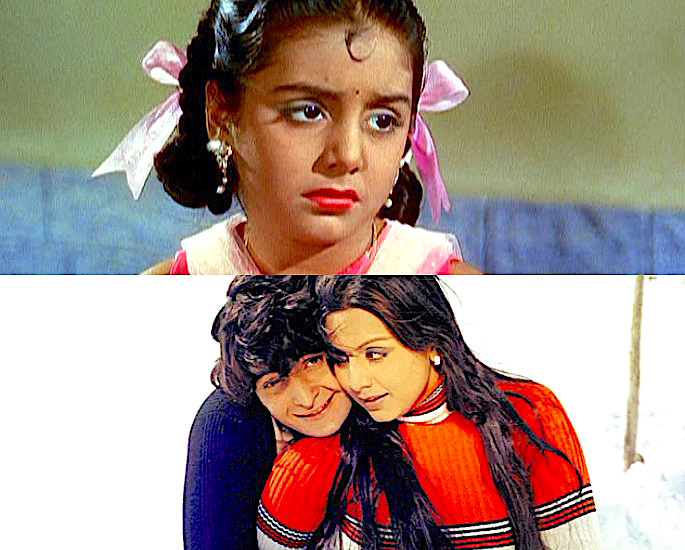 Neetu Singh was born Harneet Kaur. She was one of the most famous Bollywood child artists during the 60s and early 70s.

Using the name Baby Sonia, she began acting under the age of eight.

She made her acting debut in the film Suraj (1966). Apparently, it was actress Vyjanthimala who spot Neetu after watching a school dance of hers.

Vyjanthimala gave a strong recommendation for Neetu to Suraj director, T Prakash Rao. Therefore, Neetu had a small role in the film without being credited for it.

The same year, she came to feature as Manohar’s (Ramesh Deo) daughter, Roopa, in Dus Lakh (1966).

Her dual roles of Ganga and Jamuna split from each other due to their parent’s separation.

In the action-comedy Waris (1969), she portrays Baby, the sister of the real prince, Ram Kumar (Sudhesh Kumar).

Her other child artist roles include Roopa in Ghar Ghar Ki Kahani (1970) and Vidya from Pavitra Paapi (1970). After growing up, she came in films credited as Neetu Singh.

She had good on-screen chemistry with husband Rishi Kapoor, appearing in hit films like Khel Khel Mein (1975) and Kabhi Kabhie (1976). 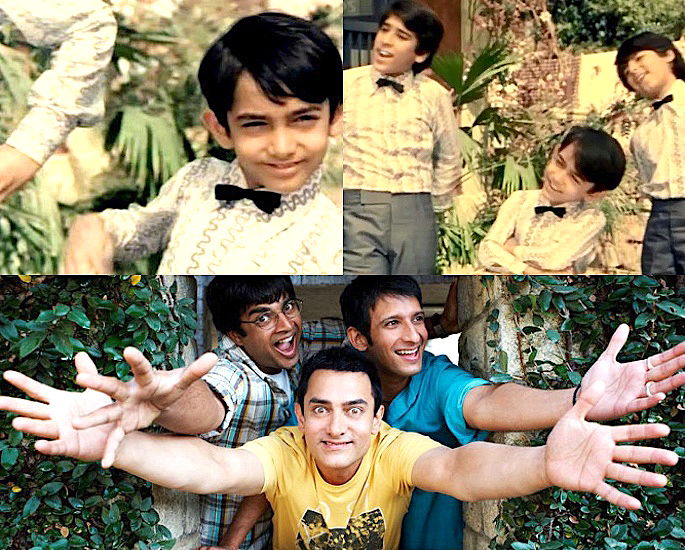 Aamir Khan had one pivotal role as a child artist under the banners of Nasir Hussain films and United Producers.

He made his film debut as a child artist in Yaadon Ki Baaraat (1974). The film was made by his paternal uncle and eminent filmmaker Nasir Hussain.

He plays the cute and adorable young Ratan aka Monto in the film.

Ratan and his two elder brothers, Shankar (Master Rajesh) and Vijay (Master Ravi) learn the title song from their mother (Ashu) on their father’s birthday.

The song becomes very close to Ratan and his brothers.

In the song, Aamir is seen in a very neat look, wearing a printed shirt, bow tie and grey shorts.

Aamir as Ratan has a very small but vital role in the film as he quickly grows up, following the murder of his parents. 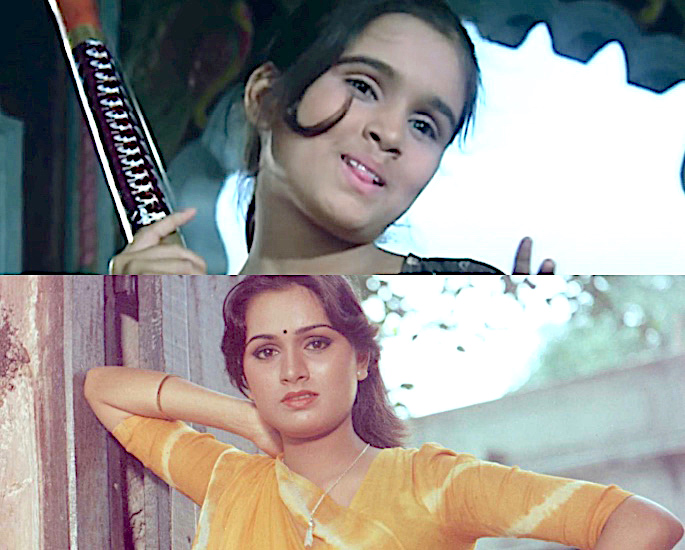 Padmini Kolhapure was fortunate to come as a child artist under big banner films.

In this film, she shared the screen with other key characters such as Raghu Shukla (Sanjeev Kumar).

Roopa lives in a village with her father who is a priest. The young Roopa features in the devotional song, ‘Yashomati Maiya Se Bole Nandlala.’

She partly becomes disfigured due to a pot of boiling oil burning on her face. She is also burnt from the neck.

As a result, Roopa hides the right side of her face. Despite this incident, Roopa continues to remain spiritual. 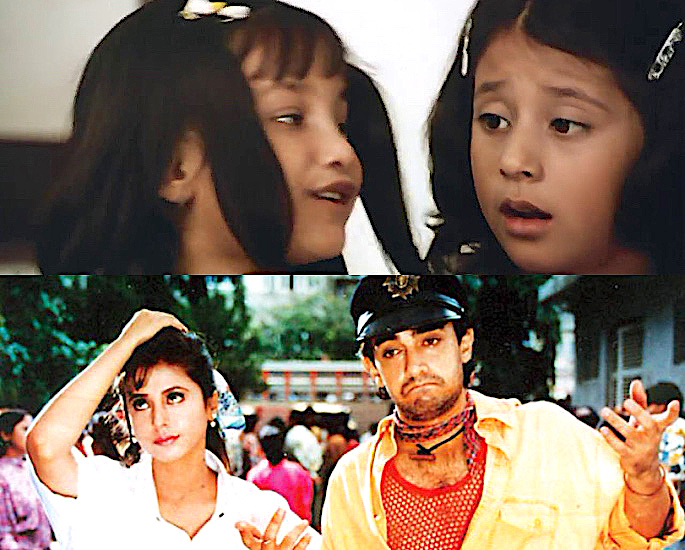 Urmila Matondkar came in a few Bollwyood films as a child actor. She made her debut in Kalyug (1983). But it was in the film, Masoom (1983) that she had the opportunity to play a prominent child artist role.

Masoom took inspiration from the novel, Man, Woman and Child (1980) by Erich Segal.

She plays the role of Pinky in the Shekhar Kapur directorial. Urmila’s character has a lot of emotion, especially after the untimely arrival of her step-brother Rahul Mahotra (Jugal Hansraj).

Pinky’s family is torn apart after her mother finds out that her husband DK Malhotra (Naseeruddin Shah) had an affair with Bhavana (Supriya Pathak).

She plays the elder sister of Minni (Aradhana Srivastav). The two sisters have some varied moments together.

With Pinky coming from a well to do family, Urmila has a very neat look in the film. She did a few other films as a child actor as well, including Bade Ghar Ki Beti (1989).

After turning an adult she made an appearance in several unforgettable films. Rangeela by director Ram Gopal Verma did well at the box office.

Other celebrities started as Bollywood child artists – be it having very small scenes or having less impact.

Sanjay Dutt is one of them. He can be seen in the Reshma Aur Shera (1971) qawwali, ‘Zaalim Meri Shraab’ by singer Manna Dey.

The listed stars paved the way for other potential stars who also started their careers as Bollywood child artists.

Alia Bhatt was seen playing a young timid Reet Oberoi in the psychological action thriller Sangharsh (1999). Surely, there will be many more future stars beginning their film journey as Bollywood child artists.

Faisal has creative experience in the fusion of media and communication and research which increase awareness of global issues in post-conflict, emerging and democratic societies. His life motto is: "persevere, for success is near..."
Nora Fatehi recalls Bollywood Struggle & meeting ‘Evil People’
Alia Bhatt stuns as Mafia Queen in Gangubai Kathiawadi Teaser