Amitabh Bachchan, who is known for his fantastic onscreen performances, has also had some of the best onscreen looks in the film industry.

Known as one of the finest Bollywood actors of all time, Amitabh Bachchan has had some of the best onscreen looks in his incredible decade-spanning career.

The Shahenshah of Bollywood made his debut in 1969 with the film, Saat Hindustani.

Yet, it was not until 1972 when Amitabh Bachchan catapulted to stardom in his hit film, Zanjeer. This film made him into the action star his fans know and adore him for.

Since then, Amitabh Bachchan has starred in more than 200 films.

As well as his unforgettable roles, many fans remember the legendary actor for his captivating fashion looks onscreen.

We explore an array of Amitabh Bachchan’s looks from his silver fox look in Shahenshah (1988) to his quirky ensemble in Jhoom Barabar Jhoom (2007). 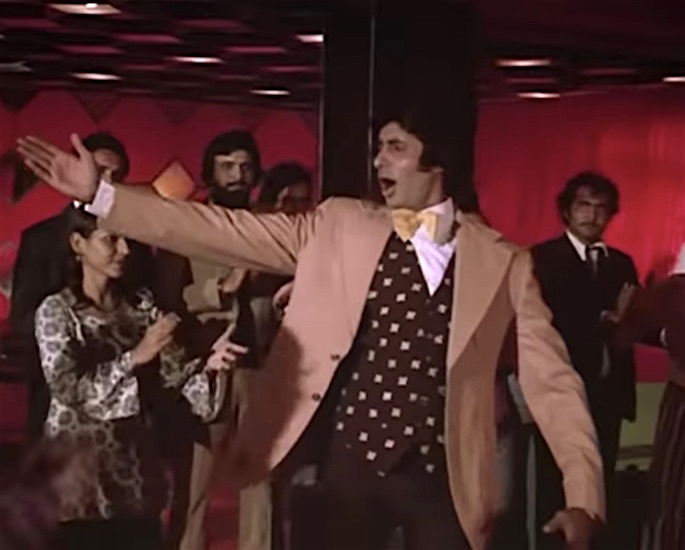 Taking it back to the seventies, Amitabh Bachchan starred as the suave and dangerous, Don in the hit film, Don (1978).

The film revolves around Don who is known as the most wanted criminal in India.

However, his life spirals out of control when he succumbs to his injuries during a police chase.

This introduced Don’s lookalike, Vijay, into the storyline who replaces Don in order to aid police investigations.

Amitabh Bachchan was applauded for the way he portrayed the character with such ease and perfection.

While Don was dressed well throughout the film, it was his outfit in the hit song, ‘Main Hoon Don’ which is evergreen.

In the song, viewers can see Amitabh Bachchan wearing a three-piece suit. His beige blazer complements his dark brown trousers and waistcoat.

Not to forget his rather large bow-tie which adds dimension to his overall look. 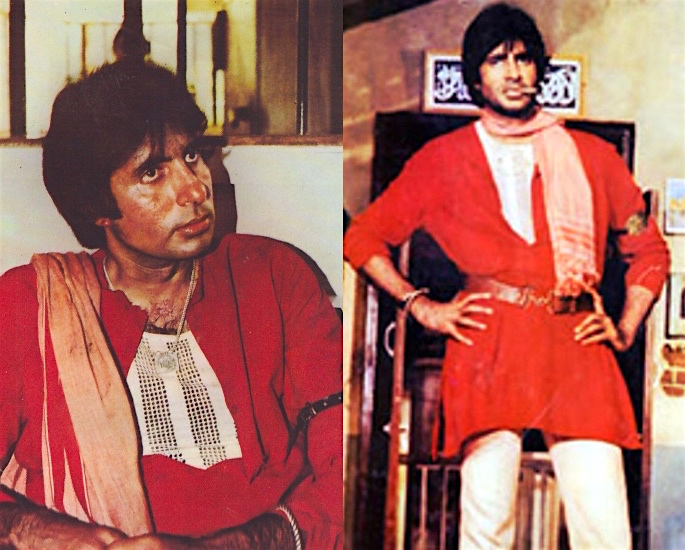 Known as a cult classic in Bollywood, Amitabh Bachchan’s Coolie (1983) is an evergreen film and continues to be remembered by fans decades later.

The film features a star cast including the late Rishi Kapoor, Kader Khan, Suresh Oberoi and Rati Agnihotri to name a few.

Coolie is also remembered for its infamous fight scene which caused Amitabh a near-fatal injury due to a miscalculated jump.

In the film, Amitabh Bachchan portrays the role of a coolie known as a porter.

On the fashion front, Big B does justice to his look in Coolie. His iconic look consisted of a red, lightweight kurta with open buttons and beige rolled-up trousers.

His avatar was completed with a brown belt worn over his kurt and a red and white scarf.

The simplicity of his outfit and Amitabh’s tremendous acting skills gave justice to his character. 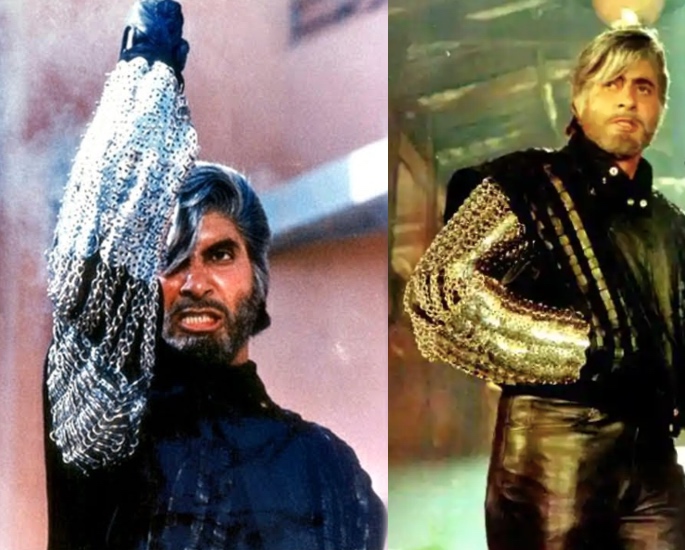 Starring as a vigilante, Shahenshah (1988) is known as one of Amitabh Bachchan’s finest films.

The actor plays the role of an angry man who is full of revenge and goes by the name Shahenshah.

As well as the crime-fighting vigilante, Amitabh also essays the role of a corrupt police officer, Vijay.

Yet, it is his striking outfit which was adored by fans and critics alike. Amitabh’s Shahenshah outfit consisted of black leather trousers and a black jacket.

However, it was the metal arm accessory which completed his look. He added to the look with his silver fox-like hair.

In fact, the arm of the costume reportedly weighed approximately 14-18 kilos. 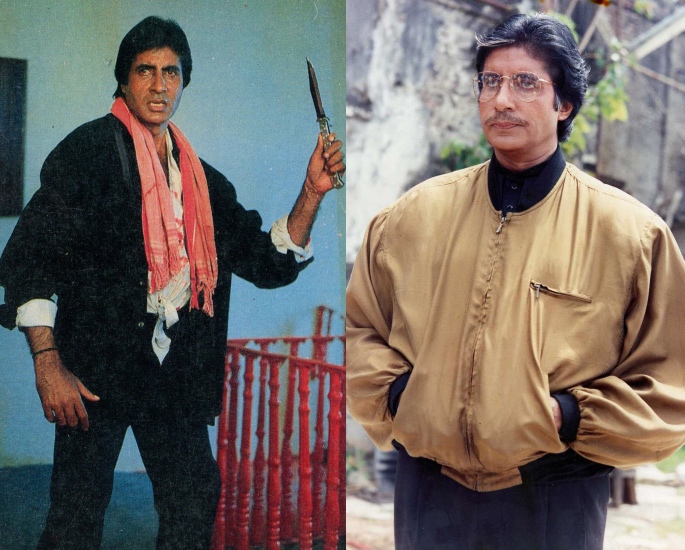 Fans saw a style transformation of Amitabh Bachchan in the 1991 blockbuster film, Hum.

Initially, Amitabh is introduced in the film as the ruthless and rugged Tiger. For his look, Amitabh is seen wearing black trousers and jacket teamed with a white shirt with open buttons.

His avatar is completed with a red and white chequered scarf draped around his neck.

As the story progresses, Amitabh Bachchan is reintroduced as Shekhar Malhotra.

For his second look, Big B switches from a rugged avatar to a smart one. His style consists of formalwear, neatly set hair, a moustache and glasses.

It was certainly a treat for viewers to see two sides of Amitabh Bachchan’s character in one film. 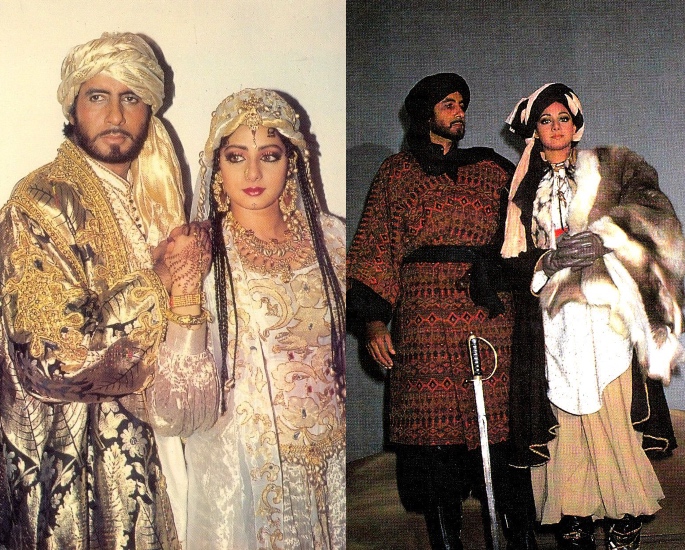 Khuda Gawah was the second highest-grossing Bollywood film of 1992 and was praised for its screenplay, performances, direction, production and music.

Starring in the lead roles was Amitabh Bachchan as Badshah Khan and the late Sridevi in a dual role as Benazir and Mehndi.

The film is based on Afghanistan tribes. Thus, Amitabh’s avatar stayed true to Afghani styles and traditions.

Amitabh Bachchan’s eyes were also lined with kajal (eyeliner) to intensify his expressions. 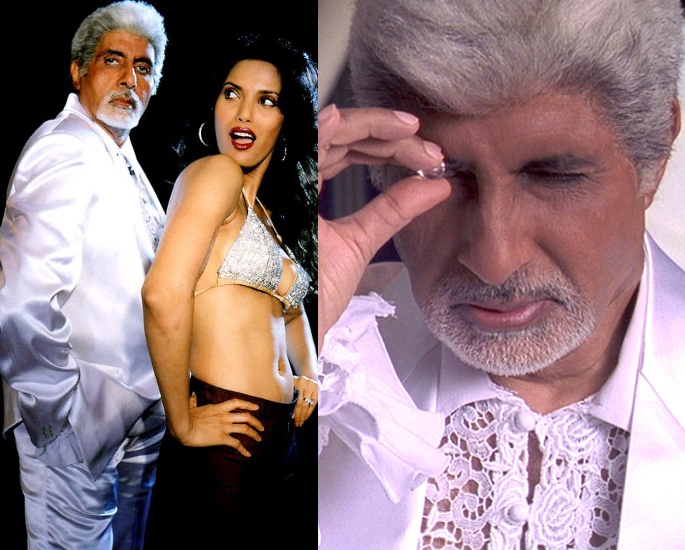 Despite this film failing to impress audiences and critics alike, Amitabh Bachchan’s avatar in Boom (2003) is endearing yet strange.

Boom follows the story of three successful supermodels who get involved with the underworld.

In the film, Amitabh Bachchan plays the role of a gangster who is also a Casanova.

For Amitabh’s most iconic look from the film, he wore an extravagant white satin suit teamed with a white crochet shirt with frill sleeves.

The actor also sported white hair and beard to complete the look.

Even though Boom is regarded as the actor’s biggest career mistake, his avatar has certainly gone down in history. 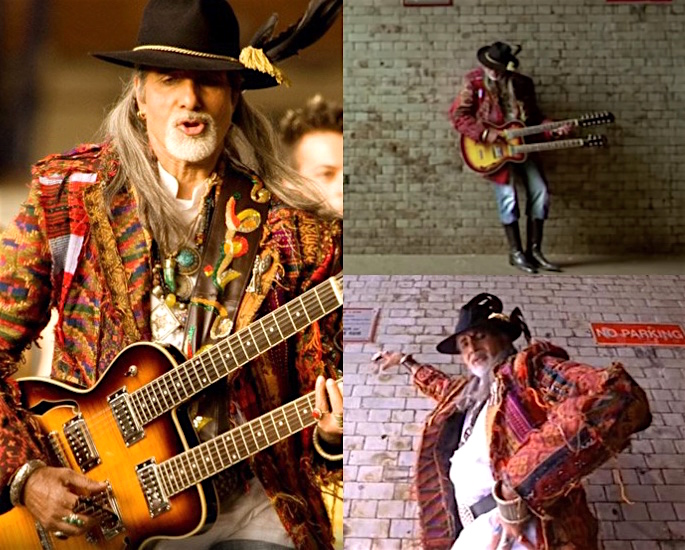 Amitabh Bachchan became the talk of B-town with his extravagant look in the 2007 film, Jhoom Barabar Jhoom.

The actor’s look was paired with light blue denim washed jeans and a white shirt.

To accessorise the outfit, Amitabh is seen sporting a hat with ribbons and feathers, a waist belt, black boots, layered necklaces and beaded hair. 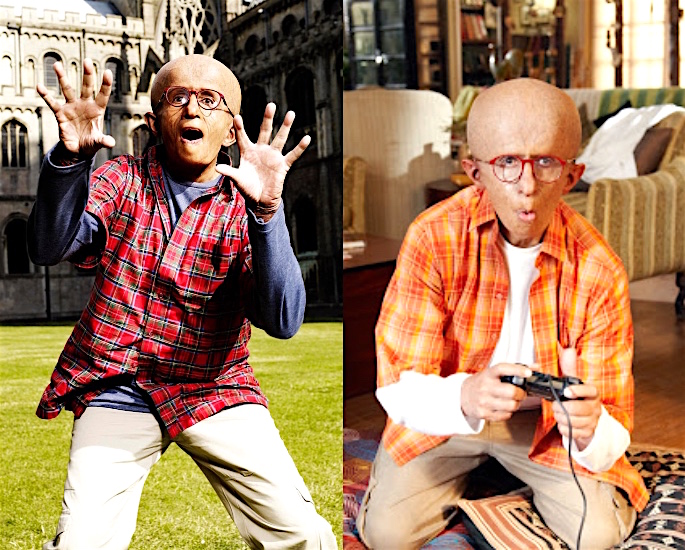 Amitabh Bachchan took Bollywood fans across the globe by storm with his fantastic execution of a 12-year-old boy, Auro in the 2009 film, Paa.

Auro suffers from a rare genetic disorder called Progeria and is looked after by his single mother, gynaecologist Dr Vidya (Vidya Balan).

Interestingly, Auro wishes to search for his father who is played by Amitabh Bachchan’s real-life son, Abhishek Bachchan.

It is known that many stars in the film industry sit for hours in the makeup chair to get ready for their character’s look.

In this instance, Amitabh Bachchan was required to sit for hours for his character Auro to come to life with prosthetics.

In fact, no one was permitted to carry mobile phones on the sets of Paa to protect Amitabh Bachchan’s look from being leaked.

Alongside his makeup and prosthetics, Amitabh wore large brown glasses and casual outfits or his school uniform in the film.

It is still difficult to comprehend how Amitabh Bachchan who was 67-years-old at the time played a 12-year-old boy effortlessly. 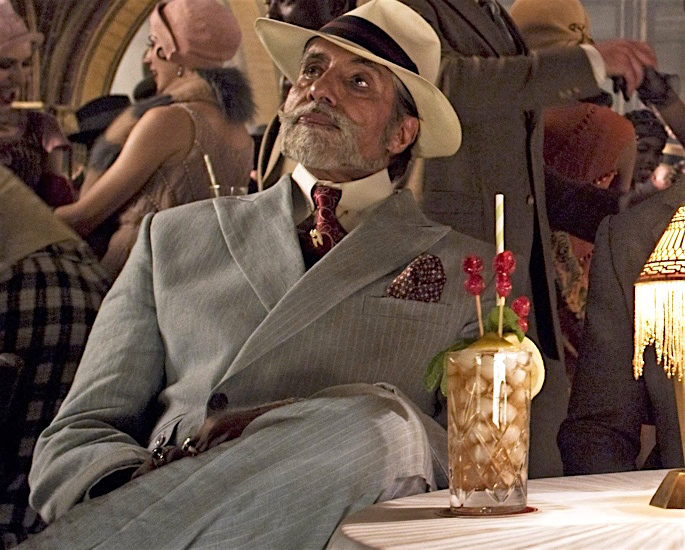 After captivating audiences in Bollywood, Amitabh Bachchan travelled to Hollywood to cast his magic.

Despite playing a blink-and-you-miss-it role in The Great Gatsby (2013), Big B’s avatar as a flamboyant Jewish moneylender got many of his fans excited.

“I play Meyer Wolfsheim for about a few seconds … by the time you look down on your popcorn to pick another morsel, I’d be gone from the film… he, he… kinda short service… But with giants of Hollywood – Leonardo DiCaprio, Toby Maguire.”

Nevertheless, his short screen time was enough to get fans talking about his look in the film.

He wore a suave grey suit teamed with a burgundy tie and pocket-handkerchief.

Amitabh was also seen wearing a white hat with a matching burgundy ribbon wrapped around.

Adding to the splendour of his look, Amitabh Bachchan sported a new beard and moustache look never seen before on the legendary actor. 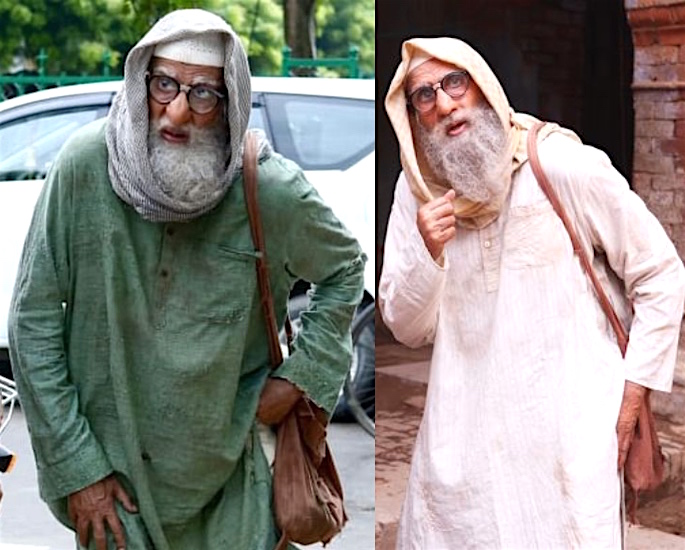 Another unrecognisable look of Amitabh Bachchan’s onscreen avatars is from his 2020 film, Gulabo Sitabo.

Big B played the role of a grumpy old landlord from Lucknow named Mirza. He is adamant of evicting his tenant, Baankey (Ayushmann Khuranna).

However, Baankey is equally as stubborn and will not leave.

Amitabh Bachchan’s look for Gulabo Sitabo was leaked online and needless to say praises poured in for the actor’s avatar.

Once again, his look relied heavily on prosthetics to make him unrecognisable.

Speaking about his look, Amitabh took to his blog to say:

“It’s been an exhausting day. The prosthetics have been tiresome and they sap all your efforts away but then this is what we aimed for.”

Amitabh Bachchan continues to entertain audiences with his fantastic films which are revisited by fans.

Our list of the actor’s most iconic avatars is merely a glimpse into his range of looks he has sported over the years.

Other honourable mentions include his look as Sexy Sam in Kabhi Alvida Naa Kehna (2006), Babu Moshai in Anand (1971) and Vijay Verma in Deewar (1975) to name a few.

Ayesha is an English graduate with an aesthetic eye. Her fascination lies in sports, fashion and beauty. Also, she does not shy away from controversial subjects. Her motto is: “no two days are the same, that is what makes life worth living.”
Mukesh Khanna reacts to Backlash against MeToo Comments
Deepika Padukone’s Manager remains Untraceable